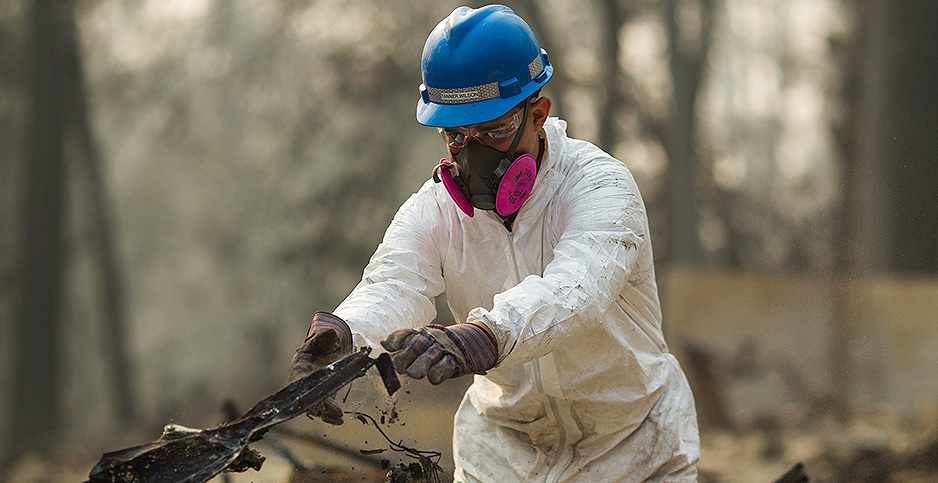 Paradise, the postcard Sierra Nevada town incinerated 22 months ago by the worst wildfire in California history, passed a milestone last month on its journey to rebuild from the ashes of 2018.

"The Town of Paradise has surpassed the 1,000th building permit issued!" officials crowed in an Aug. 12 recovery update. The occasion marked the town’s rise from what remained of 14,000 destroyed homes and buildings.

A new Tractor Supply Co. will fill half of the once burned-out Kmart store. The Best Western opened 11 hotel rooms, with another 50 planned to be ready by the end of the year.

Things were looking up. Until Wednesday.

That’s when every standing resident of Paradise — new arrivals and returnees — awoke to see a plume of black-orange smoke coming over the ridge from the Bear Fire just 8 miles to the east.

"I haven’t talked to a person, including myself, who didn’t think, ‘Oh, no, not again,’" Vice Mayor Steve Crowder said in a phone interview Friday from his rebuilt home on the edge of town. "It was hard to distinguish whether we were seeing fire or seeing the sun trying to come through the fire around us."

Many feared Paradise’s gamble against nature was lost. The town’s aggressive rebuild could be reduced to ash in spite of stricter fire codes for new homes and buildings.

Some argue that environmentalists and climate researchers are right. Wildfire has become an insurmountable risk in the Sierra Nevada and other parts of the West. Climate warming would see that prediction through.

Crowder isn’t buying it. He insists the town will be back on its feet and grow larger than before.

"Everywhere you go in town, there are sticks in the air, and it’s great to see," he said. "It’s funny because in this community, unless somebody lives there, they don’t understand. It’s got a draw to it."

Nearby Berry Creek, just down the road from Paradise, had a similar draw before succumbing to the North Complex Fire on Wednesday. With a population of just 1,200, its prospects for rebuilding are less certain.

The conundrum over whether to rebuild or leave is one of the most pressing and controversial issues facing towns in fire-prone parts of the Sierra Nevada in Northern California and the Cascade Range of Oregon and Washington. It’s likely to get more intense as climate change leads to more severe heat that bakes the landscape and primes forests and scrub for wildfire.

High temperature records fell in all three states last week. Fires burned across roughly 5 million acres as of yesterday. Oregon Sen. Jeff Merkley (D) called conditions in his state "apocalyptic" on ABC’s "This Week" program, adding, "I could never have envisioned this."

The death toll in Oregon also mounted yesterday, with 23 dead by midday. California and Washington had reported 10 deaths combined.

Experts, some of whom were watching fires roar toward their own homes on Friday, said worsening climate conditions are pushing fire-prone communities like Paradise to the brink.

Unlike other parts of Northern California, mountain towns are not necessarily havens for the wealthy. Before the Camp Fire, for instance, roughly a quarter of Paradise’s housing was either manufactured homes or trailers.

Yana Valachovic, a forest adviser and extension agent at the University of California and member of the California Fire Science Consortium, said property owners in places like Paradise often have little choice but to return to their burned-out communities. Their decisions are usually based upon economic realities and family ties.

"It’s just like any other place," she said. "There’s immense pressure on local politicians to respond to personal demand [to rebuild], and that’s true in flooded areas and hurricane zones just like it is with fires.

"What if all you have is insurance money to rebuild [in the same place] or sell the property way below its value to someone else? How would you make that choice?" Valachovic added. And if people choose to stay, she said, "who is going to issue an eminent domain proclamation and take private property, and does that make sense fundamentally? The entire American West is wrestling with these questions."

In the absence of big, disruptive policy changes, Valachovic said, the best opportunity for towns like Paradise "is to adapt and rebuild smarter," including through adoption and enforcement of stronger building codes that require property owners to use fire-resistant materials like concrete, stone and stucco.

California already requires that new construction in high-hazard areas meet what is known as "Class A" roof standards. Those buildings must have reinforced roofs of brick, masonry or concrete with roof vents that draw in cool air and allow heat to escape. Walls and floors also must be built to withstand flames and high heat, while yards must be maintained to eliminate ignitable vegetation.

All newly built structures in Paradise meet those standards, which were established in 2008. Roughly 1,700 homes not destroyed by the Camp Fire were grandfathered under the old rules, while some other communities have skirted them altogether.

In Paradise, the city has benefited from a first-of-its-kind Federal Emergency Management Agency program to remove more than 500,000 dead, dying or stressed trees tall enough to hit a private or public roadway if felled by wildfire.

Some of the 86 deaths in Paradise linked to the Camp Fire were caused by downed trees and debris blocking residents from using narrow roads to reach lower-elevation evacuation areas, officials said.

As for climate change and wildfire risk, many returnees to Paradise acknowledge the climate experts are at least partly right.

Hot days are rising in number and sticking around longer, sometimes up to a week, and summer nights once marked by cool mountain air are becoming rarer, with residents using air conditioning to cool their homes. "This summer has definitely been hotter than we’ve experienced in the past," Crowder said, a condition he attributes in part to the loss of shade trees to the Camp Fire.

"The feeling here is [climate change] has something to do with it," he added. "I think the biggest issue, in my view and of most of the people I talk to, is that our state and federal governments have mismanaged our forests. You are not allowed to cut trees, then you have outfits like the Sierra Club that when you try to do something to clean up a forest, they sue to stop it."

The challenges did not dissuade Paradise from rebuilding out of the ashes. In a normal year, the city issues between 25 and 30 permits for new construction. Less than two years after the Camp Fire, the permit number is pushing 1,100, with nearly 350 homes already holding certificates of occupancy.

"You’ll never find a more resilient community," Crowder said. "Some people were more stressed than others, and to be honest, I thought [the Camp Fire] was happening all over again. I just thank God it never got into town, but I was sure it would."