A scrappy group whose scorecard isn’t for the fainthearted 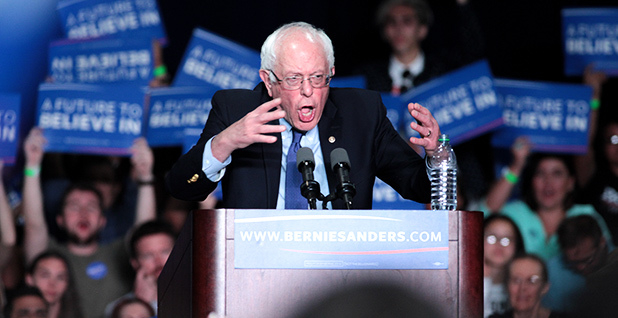 Climate change deniers be warned. There is a new environmental scorecard in town, and it’s coming for you.

It was launched in 2013, but the group has recently ramped up its activities. In the last week, it has endorsed Vermont independent Sen. Bernie Sanders’ presidential campaign and released its first scorecard on Senate Democrats — ranking members on not only their votes but also their climate change activism.

To be sure, the group is much smaller — and perhaps more liberal — than major players like the League of Conservation Voters and Sierra Club. But unlike LCV, it has a laserlike focus on climate and aims to be ideologically pure; its co-founder, R.L. Miller, says the group will not endorse moderate Democrats just because they are viewed as more environmentally friendly than their Republican opponents.

That mindset, Miller said, appeals to grass-roots activists like the small donors who have supported Sanders’ presidential bid.

It has also attracted some big names: Pennsylvania State University climatologist Michael Mann, of "hockey stick" graph fame, is an adviser, and Bill McKibben, a leading opponent of the Keystone XL pipeline and founder of 350.org, sits on the group’s board.

Cutting, 53, said he became energized to work on climate issues after working on the rollout of 2004’s Arctic Climate Impact Assessment, which "woke me up."

The report chronicled how the effects of a warming climate were permanent and couldn’t be reversed. It motivated him to dedicate himself to the issue.

Cutting added that Climate Hawks Vote was born out of the mindset that it isn’t enough just to criticize Republicans.

"I thought it would be sufficient to just point out the fact that my congressman doesn’t believe in science, and that would be enough," she said. "That was extraordinarily naive on my part."

"I’ve been watching R.L. Miller with admiration for years," McKibben said. "Whenever she asks for help, I try to give it."

In Gallego’s race, for example, the group highlighted that his Democratic primary opponent, Mary Rose Wilcox, had received contributions from coal interests.

In the 2014 cycle, the group raised about $28,000. The League of Conservation Voters, in contrast, spent $30 million — $19 million on federal races and another $10 million on state-level races. The Sierra Club similarly spent several million dollars on 2014 campaigns.

Much of the group’s recent effort has been directed at compiling its first scorecard.

The scorecard differs greatly from the leading congressional environmental scorecard from the League of Conservation Voters, which for four decades has served as an almanac of lawmakers’ environmental records.

LCV typically only tallies votes and includes a variety of environmental issues that its board considers indicative of a member’s environmentalism.

Sara Chieffo, LCV’s vice president of government affairs, welcomed Climate Hawks Vote’s efforts but also questioned its methodologies. She noted that LCV gives members a heads-up if it is considering scoring an upcoming vote. That doesn’t appear to be part of Climate Hawks Vote’s modus operandi.

Miller and Climate Hawks Vote, while complimentary of LCV and other groups, contend it isn’t enough to only measure Senate and House votes in the current gridlocked, Republican-controlled Congress.

Particularly in the House, Republicans have been unified in passing political bills disapproving of the Obama administration’s actions on climate change as well as Clean Water Act and Clean Air Act regulations.

That, she added, doesn’t give an accurate picture of how active a member, and especially a Democrat, is on climate change.

"To say that votes don’t matter anymore, I think, misses a big part of the story," she said. "It’s incumbent to tell the stories of those attacks."

Miller also pointed out that LCV’s endorsement of former Secretary of State and New York Sen. Hillary Clinton early in the presidential race illustrated the differences between the two groups.