‘A seat waiting’: GOP sets Barrett vote. What will Dems do? 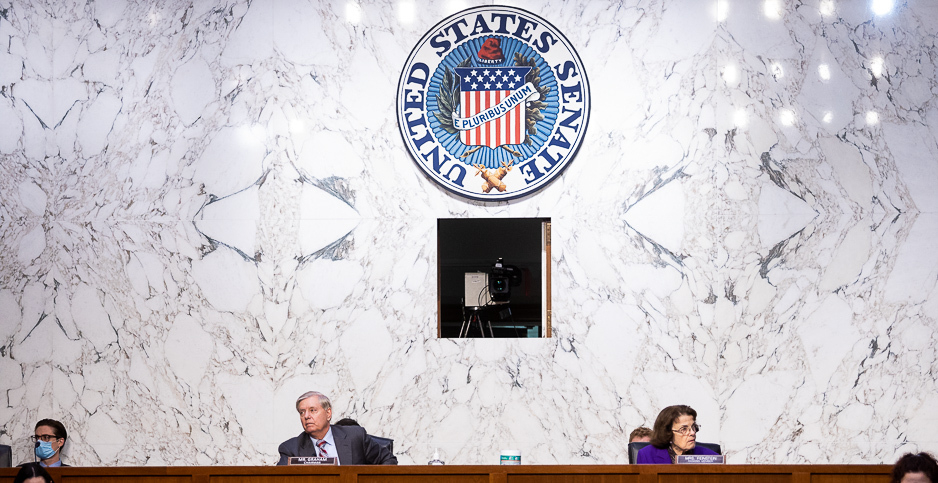 The Senate Judiciary Committee plans to vote this week on whether to approve the nomination of Judge Amy Coney Barrett to the Supreme Court.

Barrett, whom President Trump has tapped to replace the late Justice Ruth Bader Ginsburg, is largely expected to win the panel’s support — over the frustrations of Democrats who say the 7th U.S. Circuit Court of Appeals judge spent much of last week’s hearings ducking questions on key issues like climate change.

Judiciary Chairman Lindsey Graham and his GOP colleagues rejected calls to postpone the proceedings until after the elections (Greenwire, Oct. 15).

"There is a seat waiting for Judge Barrett on the Court, and God-willing she will be voted out of committee and confirmed swiftly," Graham (R-S.C.) said in a statement Thursday.

Senate Democrats have only hinted at efforts to throw a wrench in the GOP’s plans rather than present an opposition plan for the caucus to follow.

The party tried unsuccessfully to thwart the last day of confirmation hearings Thursday, only able to delay the proceedings.

The committee vote will be along party lines. On the floor, at least two moderate Republicans — Lisa Murkowski of Alaska and Susan Collins of Maine — have opposed taking up a nominee before the elections, but otherwise the GOP has enough votes to confirm Barrett. Two more Republicans would have to defect for Democrats to get their way.

Democrats may again try to deny the Judiciary Committee quorum to move the vote forward, but the GOP majority would be able to overcome the obstacle. It’s unclear whether Democrats would try to boycott a floor vote.

Asked whether he would support expanding the Supreme Court if Republicans confirm Barrett and Democrats take control of Congress and the White House next year, Coons suggested he was open to the idea.

"Like Joe Biden, I’m not a fan of expanding the court," said Coons. "But we have a few weeks here to see whether there are four Republicans who will step back from this precipice."

Barrett would be the court’s sixth justice appointed by a Republican president, potentially locking in a conservative majority for decades to come.

Green groups are concerned that Barrett would work with her colleagues on the right to overturn key climate precedent and strike down environmentalists’ standing to sue (E&E Daily, Oct. 16).

Several Senate Democrats — including Sens. Sheldon Whitehouse of Rhode Island, Jeff Merkley of Oregon and Debbie Stabenow of Michigan — released a report Friday about the impact that more than 200 Trump-appointed judges have had on the environment.

This week the Judiciary Committee also plans to vote on Benjamin Beaton for the U.S. District Court for the Western District of Kentucky, Kristi Johnson and Taylor McNeel for the Southern District of Mississippi, Kathryn Mizelle for the Middle District of Florida and Thompson Diets for the Court of Federal Claims. Senate floor action on judicial nominees will also continue.

A third Trump-appointed Supreme Court justice could help cement any anti-environmental rulings by the lower benches, the senators wrote.

"Ginsburg’s environmental advocacy made the nation safer, healthier, and more secure for the next generation," the report says. "Her absence on the Court will resonate for years to come."