A skeptic’s auto mall could host rollback on car rules 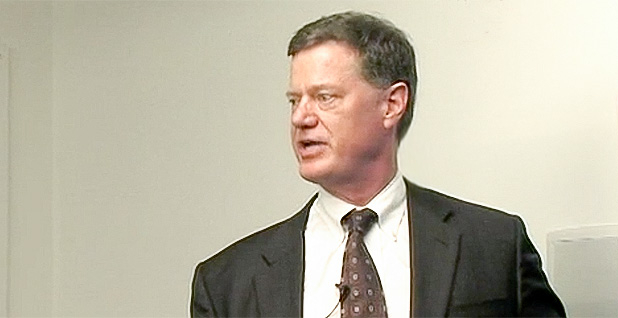 U.S. EPA is considering using an auto mall owned by a climate change skeptic as a backdrop for its announcement to weaken car pollution rules, according to sources.

Agency officials were trying to find a car dealership near the Washington, D.C., metro area as the site for the announcement, expected tomorrow. One option under consideration was a Chantilly, Va.-based venue owned by Geoffrey Pohanka, a board member of the National Automobile Dealers Association (NADA) who has questioned mainstream climate science.

An EPA spokeswoman wouldn’t confirm if Pohanka’s auto mall was being considered. She said plans remained in flux Friday.

On his website, isthereglobalcooling.com, Pohanka has written that natural forces, rather than man-made greenhouse gas emissions, are the primary contributor to global warming. The website collects links to reports casting doubt on the cause of sea-level rise, ocean acidification and melting glaciers.

"I am simply a private individual in a family business, and wish to help people to better understand that there is no consensus on this subject and nor should there be," Pohanka has written.

"The one thing I do not believe, from my research, is that the reduction of CO2 emissions will have much impact on earth’s climate," Pohanka wrote on the website.

The search for a venue comes as EPA Administrator Scott Pruitt prepares to weaken fuel economy targets set by the Obama administration. The announcement planned for tomorrow would affect cars made in 2022 to 2025. It will take months for the agency to hammer out a proposal, but the decision sets in motion a likely legal battle with California and a dozen other states that require automakers to meet the stricter standards.

The National Automobile Dealers Association is a prominent critic of the tailpipe standards. It has sent regulators studies claiming that the rules cost consumers $3,000 per vehicle, significantly higher than what EPA has found. The trade group also argues that EPA and California should not be regulating greenhouse gas emissions from cars, saying that the National Highway Traffic Safety Administration should be the sole regulator of tailpipes.

EPA is expected to cite those arguments, among others, in its official declaration challenging the Obama-era rules, according to people familiar with the document.

Pohanka represents the Washington, D.C., area on the NADA board. The Pohanka Automotive Group, based in Capitol Heights, Md., sells Acura, Chevrolet, Honda, Hyundai, Lexus, Mercedes-Benz, Nissan, Toyota, Scion and Volkswagen in cities in Maryland and Virginia, according to its website.

Chevrolet spokesman James Cain declined to comment on the details of EPA’s announcement. But he said in an email Friday, "My understanding is this will be held at an auto mall, not any particular brand."

According to Pohanka’s bio on NADA’s website, he entered the auto industry in 1973 by working summers in his father’s dealership. He is a third-generation dealer.

He launched his website on global warming in 2008 as part of his efforts to lobby against the carbon cap-and-trade bill in Congress.

"He’s just a really nice guy," said Myron Ebell, director of the Center for Energy and Environment at the Competitive Enterprise Institute. "The auto dealers are much closer to consumers than the automakers are. They see them going into the showroom; they understand there’s growing resistance to increasing vehicle prices."

In a 2010 video promoted by the Competitive Enterprise Institute, Pohanka said, "It’s true temperatures have been rising moderately. … The one thing about the warming is it’s not global."

He continued, "If we had a choice between a warming environment and a cooling one, the historical record is a warming one is one of increased plant growth, increased harvests. … Man has flourished in warming periods. It’s cold periods that are ones of disease, sickness, political instability and depopulation."

Pohanka was listed as a donor to the Cato Institute, a libertarian think tank, in the acknowledgements of a report that concluded, "Reducing U.S. emissions of carbon dioxide, even by over 80 percent, will have no measurable effect on global mean surface temperature or other climate-change-related phenomena."

He has donated thousands of dollars to candidates from both parties over the past two decades, according to OpenSecrets.org.