‘A slap on the wrist’ as jury convicts Bundy 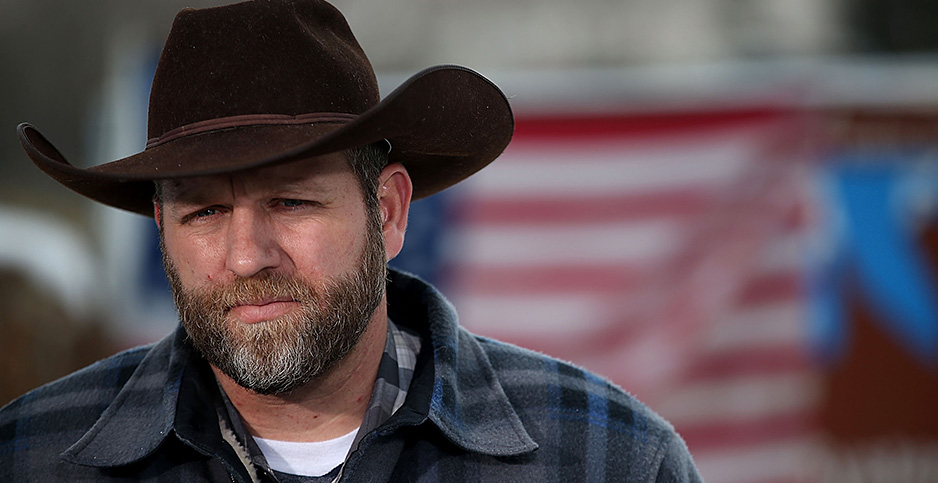 A jury this week convicted Ammon Bundy, pictured in 2016, of trespassing and resisting arrest during a protest at the Idaho Statehouse. Justin Sullivan/Getty Images

An Idaho jury last night convicted Ammon Bundy of two misdemeanor charges stemming from his protests last year at the Idaho Capitol, marking the first time the anti-government activist has been found guilty of a crime despite facing multiple trials.

Bundy, who is campaigning to become Idaho’s next governor, must complete 48 hours of community service over the next six months and pay $750 in fines in addition to court costs. He will not serve any time in jail if he complies with the sentence.

"You’re not a risk to the community. You’re not a danger or a threat to people’s well-being. You’re not a violent man," Ada County Magistrate Judge David Manweiler told Bundy ahead of his sentencing last night.

He continued: "What do I do to punish you and deter you? I don’t know if there’s much I can do. I don’t think you’re a guy that’s going to be deterred. I don’t think this case is going to alter or change your path, your beliefs or your passion about your rights and your liberties. That’s fine."

Instead, Manweiler issued what he acknowledged as a "slap on the wrist, maybe," ordering Bundy to serve eight days in jail, with credit for three days for time he had already served following his August arrest.

In lieu of serving the five remaining days, however, Manweiler ordered Bundy to complete community service with a nonprofit, church or other organization, but noted that it cannot be for Bundy’s own group, the People’s Rights network.

A six-member jury spent a little more than an hour deciding Bundy’s guilt following a four-day trial that began Monday.

Bundy and his co-defendant, Aaron Von Schmidt, each faced one misdemeanor charge of trespassing and one misdemeanor charge of resisting or obstructing arrest for refusing to vacate an auditorium in the Capitol building last summer during the Legislature’s special session to discuss COVID-19 measures. The trial focused largely on the minutiae of Statehouse rules governing the auditorium, including its opening and closing hours.

Although Bundy rose to national prominence protesting federal land management — at his father’s ranch in Bunkerville, Nev., in 2014 and then leading an occupation of the Malheur National Wildlife Refuge in 2016 — he turned his attention last year to opposing public health policies implemented by local and state officials to address the COVID-19 pandemic.

Bundy’s arrest at the Statehouse was the first of four such arrests between August and April, along with a March incident outside the courthouse, in which he protested public health mandates before being detained.

The People’s Rights organization that Bundy established has grown primarily by focusing on those same issues. In March, he said the group counted more than 52,000 members across 37 states (Greenwire, March 11)

"You’re a smart guy, Mr. Bundy. You’re a clever and sophisticated man. You have the ability to wield great political power because of the people that believe in you," Manweiler told Bundy ahead of his sentencing.

He also acknowledged Bundy’s frustrations with the judicial system, given the two years he spent in federal prison while on trial for his actions in Oregon, and then in Nevada. Bundy was acquitted in the former case, and a federal judge declared a mistrial in the latter one.

"I can’t even imagine what it would be like to be incarcerated for a couple years for something you get acquitted of. That would leave a bad taste in anybody’s mouth," Manweiler said. "You have every right to have contempt for the judicial system, the justice system. … But there’s a way to protest. There’s a way to voice your displeasure over government."

Ada County Deputy Prosecuting Attorney Whitney Welsh had pressed for a tougher sentence under which Bundy would have served 15 days in jail, with three days of credit for time served.

"I ask the court to look at the bigger picture with regard to Mr. Bundy," Welsh said, asserting that jail time would send a message to Bundy’s supporters who might be tempted to mirror his actions.

"Mr. Bundy is a leader. People who follow leaders look to what happens when they take action," Welsh added. "I think that remanding Mr. Bundy to custody would send a message to these people consistent with that: ‘You can’t just do what you want and not be accountable.’"

Throughout the trial, Ada County prosecutors sought to frame Bundy and Schmidt as individuals who did not feel that the laws applied to their actions.

But Welsh did not seek probation for Bundy, stating: "If the choice to be noncompliant continues, as it has in Mr. Bundy’s life, I don’t think we need to be in that position."

Although Manweiler offered Bundy an opportunity to address the court, he uncharacteristically opted not to speak.

Schmidt’s sentence likewise included three days in jail, along with an equal credit for time served. He must also pay $657.50 in fines and court costs over a 10-month period.

During his remarks to Bundy and Schmidt, Manweiler lamented that the misdemeanor case required nearly a year to reach completion due to delays from the COVID-19 pandemic, as well as Bundy’s refusal to comply with mask mandates that delayed a March trial date.

"This really could have been avoided very easily. It’s a shame that it went this far: 10 months, four days of trials, thousands of pages of paper filed and decided and processed in this case," Manweiler said.

He later added: "It’s certainly not a federal case, as they say, although it sure seemed like one. In a lot of ways, it really, really did."

Bundy faces three additional misdemeanor charges — two for trespassing at the Statehouse and one for resisting arrest — following his arrests twice in one day in April (Greenwire, April 9)

An Idaho state government agency had banned Bundy from the Capitol building and its grounds following his arrests last summer, and ejected him when he returned to the Statehouse in April.

Court records show Bundy is scheduled for a pre-trial hearing in that case next Thursday. In a statement to E&E News, Bishop’s office said that Bundy is on vacation with his family and has not decided whether to seek a plea agreement in the wake of his guilty verdict or to proceed with the second trial.

Despite posting videos to YouTube at the close of each trial day, the normally loquacious Bundy opted for only a written statement after the verdict.

In a statement posted to his gubernatorial campaign’s Twitter account, Bundy said he does not plan to appeal.

"The precedence this sets is a very dangerous for anyone who may disagree with the presiding officers of the legislature," Bundy wrote. "However, it is out of my hands now. I have no intention to appeal this decision. The people of Idaho have spoken and I will serve my sentence as ordered."

During the trial, Bundy revealed in testimony to prosecutors that he is not registered to vote in Idaho, despite seeking the state’s top elected office.

Welsh reiterated that fact to the jury in her closing arguments, stating: "He also testified that he’s not registered to vote. You don’t have to get arrested in order to make a point. We ask you to follow the law."