A slow disaster scorched Wyo. No one saw it come or go 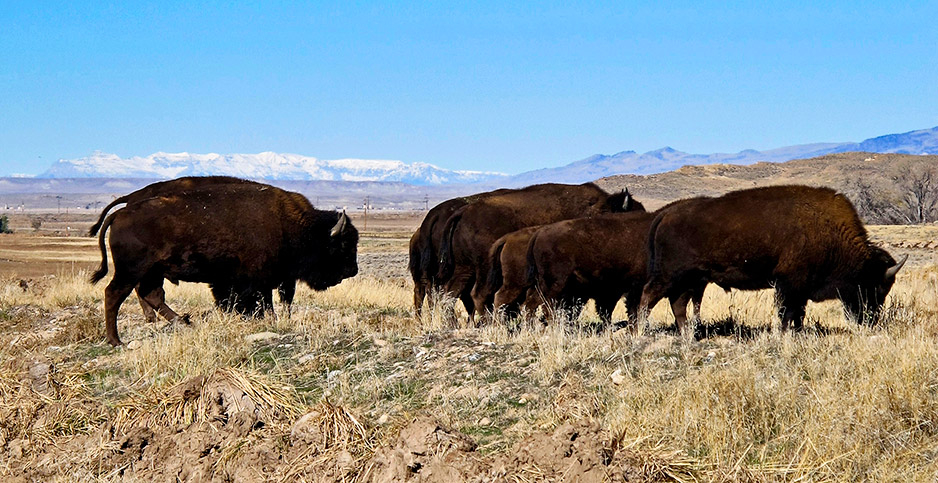 Perhaps the most menacing and widespread aspects of climate change are the droughts that can come with climbing temperatures.

They’re not like violent hurricanes, which slam into a region with devastating force and then leave abruptly. Storms get names and television time. Droughts don’t. Scientists call them a "creeping phenomenon" whose arrival is hard to identify. So is their exit.

In agricultural areas, the creeping effect can subtly change the rhythms of life over a period of years. This compounds the struggle to detect and adapt to droughts. If there is a poster child where the "creep" has taken a toll of shock, misery and expense, it might be the Wind River Indian Reservation, an arid 3.4-million-square-mile stretch in west-central Wyoming.

Measured in terms of damage, U.S. droughts rank second behind hurricanes. They cost $236 billion from 1980 to 2017, according to NOAA. There was nothing subtle about the drought of 2012. It covered 65 percent of the United States, the largest area since the Dust Bowl.

It hit the Wind River Country in July, when hay and other crops grown by the Eastern Shoshone and Northern Arapaho people need irrigation. Normally, the reservation gets its water from winter snowpack and the melting of a nearby glacier. But heat and dryness arrived early that year, and by the time irrigation was needed, much of the water was gone.

That forced some farmers to sell their livestock herds at low prices and to watch their hay and other crops burn up in the fields. It was an unexpected blow in a fight that has left the reservation in a fragile position for years.

To many farmers, a "normal" year at the reservation consisted of memories from the 1980s and 1990s, when water for irrigation was available from mid-April into early October. Most of it came from melting snow on a ring of mountains that surround the reservation, or the glacier.

Most farmers drew their water from canals extending from the Washakie Reservoir, which was usually filled by Memorial Day and carefully husbanded until August, when irrigation needs became strong.

Then came 2013. It was warmer and drier than usual, and the storms that are needed to fill the reservoir in April and May were sparse. Starting on June 1, when the first reports of a recurring drought came, a panicky engineer for the Bureau of Indian Affairs, which runs the Washakie Reservoir, began to empty it. That meant most of the water flowed downstream unused, because the crops weren’t mature.

Irrigation was shut down in mid-July because the remaining water had to be saved for livestock. Crops died in the fields. One farmer described 2013 like this: "A lot of them lands never got enough water, and even the best of the best farmers, they suffered some losses." Rain finally came in mid-September, like a gardener watering lifeless plants.

The drought raised tensions between the reservation’s tribes — the Eastern Shoshone and the Northern Arapaho — and the Bureau of Indian Affairs, which built and ran the irrigation system that supplied most of the tribal farmers.

Tribal leaders consulted a number of outside groups, including scientists from state and federal agencies. A series of meetings were held in 2014, and the upshot was a request for a two-year, $390,000 federal grant program to give the tribes better information on the impacts of climate change.

"We’re going to have trigger points and be able to gauge where we are, so we can be prepared and have water for all of the reservation," said Mitchell Cottenoir, the water engineer appointed by the two tribes.

But by July 2015, when Cottenoir made this prediction, the Wind River Country had entered a new and even stranger irrigation season. The grant had been approved and an assortment of outside scientists arrived to help the tribes, but getting a gauge on "where we are" would take a while.

Shannon McNeeley, a social scientist with Colorado State University, began to interview tribal members and farmers to get their sense of it. Meanwhile, climate experts from the National Drought Mitigation Center and the University of Nebraska were looking at a new phenomenon: a sudden "micro-drought" that had crept into part of the reservation. For weeks, the new drought did not appear on the national Drought Monitor, which is published weekly, but it was rapidly drying out the area fed by the Washakie Reservoir.

The scientists had brought in an experimental statistical tool, called the Evaporative Demand Drought Index, or EDDI. It spotted the drying, which over the next two months proceeded to wreck another crop season. By midsummer, 2015 had established itself as a year of strange and seemingly contradictory climate signals.

EDDI was developed by Mike Hobbins, a climate scientist working with the Physical Sciences Division of NOAA’s Earth System Research Laboratory in Boulder, Colo. Hobbins, an Australian, had been intrigued by the mysteries of droughts since he was 9 years old. That was the year when his father, an engineer, had brought him to Nairobi, Kenya. They saw farmers driving the last of their thirsty livestock into the city, hoping to sell them before they died.

The traditional measure of drought has been an absence of rainfall. Much later, Hobbins stumbled across a way to measure the early stages of droughts by calculating what he calls the "evaporative demand," or the "growing thirst of the atmosphere." He found a set of weather data, spanning 38 years, giving him the basic creators of dryness: the wind, air temperature, humidity and incoming solar radiation. That allowed him to identify developing droughts on weather maps without needing to know local soil moisture conditions.

Hobbins sometimes calls them "flash droughts," as opposed to flash floods. They can both be devastating. To the scientists in the Wind River Country in mid-2015, EDDI was like a red warning light. Something was seriously wrong.

EDDI has since been used around the world to predict the early onset of droughts and help emergency preparedness. "We already knew it. They didn’t have to tell us," Cottenoir said. What tribal leaders were hoping for was a solution.

McNeeley’s interviews showed that the story of 2015 was a dismal twist on a familiar plot. The winter snow came down in the form of slush, which melted quickly, or rain, which didn’t linger on the mountains. May brought record rains, which filled up the reservoir early. "It led to an optimistic expectation among local water users that the upcoming summer would be void of drought," she wrote.

But the reservoir was already full and couldn’t handle the excess flow. So the water had to be released before most of it was needed. Then the "flash drought" reappeared, closing irrigation season on Aug. 21, leaving only enough water for farm animals.

So in March 2016, when water managers suspected that dryness during the winter had cut the snowpack by 25 to 50 percent, they declared an early drought warning. But then the snows and rain returned, culminating in a spectacular 6-inch rainfall on May 10, which caused flash floods and ended the drought warning.

But the brimming Washakie Reservoir couldn’t hold it. The water had to be released early again, and by Aug. 24, another "micro-drought" had settled in, bringing irrigation season to an early end before many farmers had enough water to save their crops. In the end, the grief of 2016 was a "mirror image" of the year before, according to Cottenoir.

Last year provided "big water" for the Wind River Country, he recalled. That wasn’t the case elsewhere: The Dakotas and parts of Montana had what the U.S. Drought Monitor called an "exceptional" drought, damaging the nation’s wheat crop and triggering record wildfires. A meteorologist for the National Weather Service in Glasgow, Mont., called it "the worst we’ve seen in 100 years."

The respite in Wyoming gave the tribes time to put together a list of what they needed. The process exposed years of neglect, a chronic lack of resources and a growing inability to measure the progress of what they were really confronting: a slowly changing climate.

Their irrigation system had been approved by Congress in 1905, but construction was never fully completed, according to a report by the Government Accountability Office. It has three reservoirs and 377 miles of canals and ditches, but its last maintenance review was done in the 1930s. Meanwhile, the canals gradually filled up with sticks, logs and other debris. The net result was "poor delivery performance" of water.

During her research, McNeeley, the social scientist, found that there were once 48 stream gauges measuring water flow into the Washakie Reservoir, but their number had been reduced to about 12 because of federal funding cutbacks. There was also no gauge for water coming out of the reservoir, which compounded the measurement problem. That was serious because the Washakie was undersized compared with other reservoirs in the area.

The remaining gauges also had difficulty measuring the difference between precipitation falling as snow or rain, which made it harder to estimate the size of the snowpack in the mountains. As for Dinwoody Glacier, which sends a badly needed stream of meltwater into the reservation in the late summer and early fall, it has lost almost 35 percent of its ice. If the reservation’s struggle with drought becomes more severe, as predicted, "then we’re just going to be done," one informant told McNeeley.

If there is going to be a solution to the Wind River Country’s drought problems, it may come in the form of an enlarged reservoir and an overhauled irrigation system, which will cost in the vicinity of $90 million. The projects are in the planning stage and may take as long as 20 years to complete.

In the meantime, according to Cottenoir, the tribes’ frustrations are likely to continue: "The water just runs down the river. We capture as much as we can in the reservoir."

Next: Predictions of "multi-decadal" droughts.