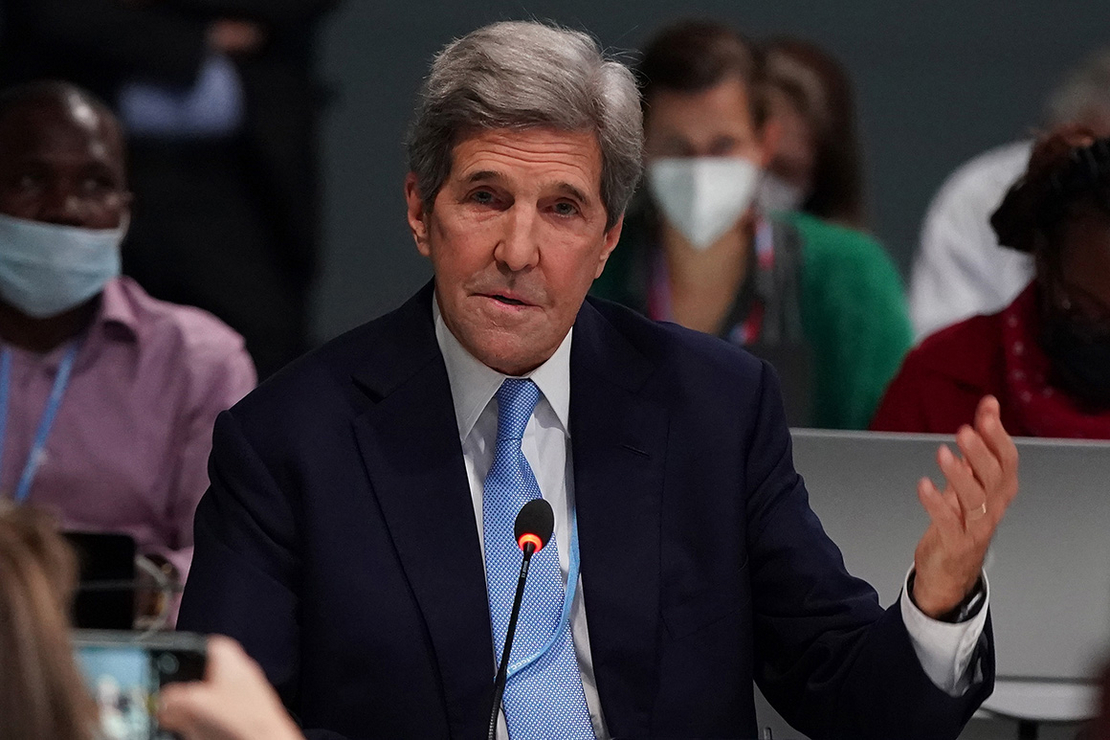 For much of last year, climate envoy John Kerry had one number on his mind: 1.5 degrees Celsius.

That’s the amount of warming scientists say the world must not surpass if it hopes to prevent dangerous and irreversible climate impacts.

But as new realities set in and hoped-for ambition fails to materialize in the U.S. and abroad, Kerry is scaling back.

Last week, he pointed to a different target: 1.8 C. That’s the amount of warming the International Energy Agency said the world would reach by the end of the century if every country successfully meets their climate pledges in full and on time.

“We want to stay on that accessible target of 1.8 degrees, and the only way to do it is to fully implement the promises that have been made,” Kerry said during a speech at an electric industry forum.

His comments signaled a departure from U.S. messaging under President Joe Biden and raised concern among some foreign officials and climate advocates that the White House is injecting uncertainty into international deliberations on climate change.

Tina Stege, the climate envoy of the Republic of the Marshall Islands, said that overshooting the 1.5 C goal would intensify the dangers facing the string of islands forming her nation in the remote Central Pacific.

“We’ve been clear — as an atoll, and as the convener of the High Ambition Coalition — that 1.5C is the limit,” she said in an emailed response to questions about Kerry’s comments. “The world has already agreed. We do not need to re-negotiate this. We need countries to implement the policies to get us on track.”

It’s unclear if Kerry’s comments signal a policy change within the Biden administration, which is struggling to pass legislation that would serve as a cornerstone of its commitment to cut U.S. emissions in half by 2030. The State Department defended Kerry’s assertions and said the “goal now” is to meet the United States’ promise to halve emissions in eight years and eliminate them by 2050.

“The International Energy Agency has told us that if all the various commitments and initiatives from COP26 are implemented, the rise in global temperature would be limited to 1.8 degrees,” a State Department spokesperson said in an email. “As Secretary Kerry has said, the goal now must be to implement those commitments plus do more to keep 1.5 alive.”

Kerry’s comments last week deviated from his assertions about the dangers of temperatures cresting above 1.5 C since he was named climate envoy.

In a speech at the London School of Economics, just before the global climate talks in November, Kerry warned that “devastating consequences await us if global temperature rises above 1.5 degrees.”

In a February speech in Egypt about the differences between 1.5 C and 2 C of warming, he said that every tenth of a degree of temperature rise holds dire consequences for the world’s oceans and food systems.

To keep rising temperatures in check will require the world’s biggest polluters to drastically cut their emissions fast, according to scientists and researchers. Those challenges come as global emissions are rising rather than falling.

That means the world isn’t on track to meet the pledges that would prevent temperatures from surpassing 1.8 C. And the latest science shows that time is running out (Greenwire, April 4).

“I think we should be realistic about where we’re heading if we don’t do more than we’re doing now, and we need to be planning for the kinds of adaptations and resilience-building measures that we know we’ll need just based on the climate change that is already coming down the pike from our past emissions,” said Kristina Dahl, a principal scientist for the climate and energy program at the Union of Concerned Scientists.

Referring to Kerry’s remarks, she added: “But I don’t know how much good it does us to move the goal posts, because we just need to be moving as quickly as we possibly can.”

Countries have put forward a certain ambition and now they need to implement action to meet it, said Niklas Höhne, a climate policy expert at the NewClimate Institute and a contributing author to several Intergovernmental Panel on Climate Change (IPCC) reports.

“Having this goal of 1.5 degrees is still very meaningful because it drives countries to at least first set their long-term ambition, and once they have the long-term ambition made public, they can then be held accountable to implement policies to meet it,” said Höhne.

A 2018 report by IPCC showed significant differences in climate impacts between the 2 C limit laid out in the 2015 Paris Agreement and the aspiration goal of 1.5 C.

At 2 C, the world would experience billions of dollars more in crop damage, twice as many extreme heat events in southern Africa, 60 percent more fires in the Mediterranean and more, said Taryn Fransen, a senior fellow in the Global Climate Program at the World Resources Institute (WRI).

“That’s with half-a-degree of difference,” she said.

The world is not fully safe at 1.5 C either, Fransen added. “But there are really meaningful differences even in these fractions of a degree.”

Low-lying developing nations that will be hit hardest by the impacts of more severe storms, rising seas and extreme heat have staunchly advocated for a target of 1.5 C — rather than the “well below” 2 C stated in the Paris Agreement. The final text out of COP26 last year helped establish 1.5 C as the target countries resolved to meet.

“So what we’re asking of the world is to not just think of the most developed, the wealthiest nations, the places that are most able to cope with this change, but to think of humanity and all of those who are at risk if we exceed these goals,” said Dahl of the Union of Concerned Scientists.

“Whether our policymakers, whether our fossil fuel executives rise to that challenge I think remains to be seen,” she added. “But the science is very clear on who stands to lose the most if we don’t.”

Redefining the 1.5 C goal would be unacceptable to many developing countries, said Saleemul Huq, director of the Bangladesh-based International Centre for Climate Change and Development.

What Kerry is correct to call attention to, said Fransen from WRI, is that this is the first time countries have made pledges that are consistent with holding temperatures below a 2 Cincrease. That represents progress, she said.

Kerry’s job of getting the world on track to limit global warming was never going to be easy. But that has less to do with his framing of the target than the fact that the U.S. has yet to pass meaningful climate legislation, say observers.

“I think what you have to do is focus on emissions and not temperature goals. There is relationship between the two, obviously, but it’s not a lockstep relationship,” said David Victor, a public policy professor specializing in decarbonization at the University of California, San Diego.

He worries that policymakers talk too abstractly about temperature goals and don’t focus enough on implementing them.

“We should be focusing on how quickly are we bending down the curves for emissions. And we should be talking about what we’re doing on the ground to learn about what works and what doesn’t work,” he said.

Fransen, from WRI, said much the same.

“And in a way, those actions don’t change dramatically whether we’re talking about 1.5 or something slightly above 1.5, so we can’t let this specific number after the decimal point distract us from making those changes very quickly.”

That doesn’t mean backing off the 1.5 C target.

The latest U.N. climate report calls into question the world’s ability to meet the 1.5 C target in the short amount of time that’s left. Global emissions would have to peak by 2025 and fall by more than 40 percent by 2030. Many experts believe the world will overshoot those targets.

Even if the 1.5 C goal does become unattainable, it’s still important to aim as close to it as possible, scientists say.