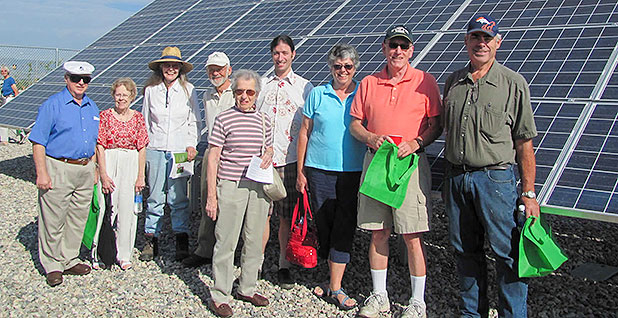 A community solar project and some of its subscribers at Poudre Valley REA, an electric cooperative in northern Colorado. Clean Energy Collective/National Rural Electric Cooperative Association

Washington County, Iowa, is populated by Mennonite and Amish farmers who raise hogs and cows, the kind of place where Donald Trump took more than 56 percent of the vote in last year’s election.

It is also a hotbed of something Trump voters aren’t usually enthused about: solar power. The local utility, Farmers Electric Cooperative, keeps selling out of it. Every time that Warren McKenna, the general manger, makes a new offering of shares in what he calls a "socialized garden," they get snapped up.

Washington County isn’t the only deep-red community with a strong demand for solar. The community solar array is almost fully booked at Bandera Electric Cooperative, in the heart of Texas Hill Country, an area dominated by ranchers who voted for Trump by a margin of nearly 80 percent. The same goes for the San Miguel Power Association, which serves a swath of southwest Colorado made up mostly of Trump-aligned ranchers, miners and drillers.

In a strange turn of events, some of the most rural and conservative parts of the country are where solar adoption is growing the fastest, brought about by a liberal-sounding sales structure called community solar. Rural electric cooperatives love it, which is ironic. These small utilities fought for years against being lumped into state renewable energy portfolios, but now realize that solar could aid in their stability — and even their survival.

The idea behind community solar is simple: Build a large solar array and sell or lease shares of it to members of the community. Count the electricity it creates against the subscribers’ monthly power bills.

"It wasn’t an issue of whether it was green or not," said a hog farmer outside Kalona, Iowa, who signed up for two shares of community solar but didn’t want to weigh in on the political question or let a big-city reporter use his name. "It just made economic sense."

The solar cognoscenti usually talk about community solar as a tool for the city the suburbs. It could help the poor trim their power bills, or allow apartment dwellers to participate in clean energy. But city-based utilities and their regulators have been slow off the mark. Only 13 community-solar programs exist at investor-owned utilities and 22 at municipal utilities, according to data from the Smart Electric Power Alliance.

Meanwhile, rural electric co-ops are running with it. Three years ago, co-ops hosted 33 community-solar programs; last year, the number rose to 141. The number of projects may reach 230 by the end of this year, according to the National Rural Electric Cooperative Association.

Even more striking, from a political perspective, is where these solar sprouts are taking root.

Of the 10 states with the most rural community solar projects, Trump won an outright majority in seven, including Georgia (No. 1, with 42 projects), North Carolina, Tennessee, Indiana, Iowa, Oklahoma and South Carolina. Only two — Colorado and Minnesota — were carried by Democratic presidential nominee Hillary Clinton.

Co-ops are usually small and free from the oversight of state electricity regulators. That has made them nimble in embracing community solar. But it doesn’t explain why a customer base made up mostly of farmers, ranchers and other country folk would be interested.

The short answer is that those people aren’t, at least at first. Since co-ops are owned by their members, they are highly responsive when a customer asks for something. In most of these co-ops, it is a pocket of liberal, environmentally minded customers who have done the asking. The co-ops have responded by embarking on a solar learning curve and have begun to take their conservative-leaning customers along for the ride.

The political consequences of this solar brushfire are still unclear.

Farmers Electric Cooperative, the tiny rural utility in eastern Iowa with only 620 members, has become a poster child for community solar. One out of every 5 of its customers have bought in, representing a higher rate of solar adoption than any sun-splashed city in California.

McKenna, the manager of Farmers Electric, didn’t think much about solar until 2008, when a local organic egg distributor named Farmers Hen House asked for help establishing a solar farm. Then an organic dairy distributor called Kalona Organics said they wanted in. The requests prodded the co-op to facilitate a 1.7-megawatt solar farm — an enormous facility for a utility with peak load of only 3.7 MW.

"We found a way to make it work," McKenna said. Today, Farmers has one of the most solarized power grids in the country.

McKenna trained a local high-school physics teacher to do installations. About 50 of them are off the grid. One lights up the gazebo in the local cemetery; others are phone booths meant especially for the Amish. Since religious principle dictates no electricity at home, they rely on the booths as a crucial link to the outside world.

By 2012, this voyage of discovery led McKenna to establish a community-solar array. Here’s how it works: Farmers customers can buy panels for $470 each, and can own a maximum of 10. The actual output of the solar array is divided by the number of panels. That quantity of electrons is deducted from members’ electricity use, and from the power bill, for as long as the array exists.

The contract only sometimes saves the customer money, but has proved popular nonetheless. McKenna has expanded the solar garden three times, and each time it sells out. In a 2013 survey, members listed ease of investing in solar and "Concern about the environment, including the impacts of fossil fuels" as their top two reasons for buying.

The catalyst in eastern Iowa, as with most rural co-ops interviewed for this story, has been the presence of a small left-leaning community within a larger, right-leaning service area.

For Farmers, the customers who raise hogs and cattle didn’t especially care about solar — but the local organic egg and dairy distributors did because their customers were liberal types from the University of Iowa a half-hour drive away.

At Bandera Electric outside of San Antonio, the solar subscribers aren’t ranchers but commercial businesses. The co-op started sales in March and almost sold out within "a matter of months," said Lauren Murley, a marketing specialist at Bandera Electric.

"The primary driver, when we ask why they’re doing solar, the answer is because of their members," said Tracy Warren, a spokeswoman for the National Rural Electric Cooperative Association. "If you are a consumer-owned business and your customers want something, you do what you can to provide it."

For the San Miguel Power Association in southwestern Colorado, the majority of the 13,000 members are ranchers, miners and oil drillers who aren’t into solar. But the co-op also serves a liberal hot spot: the ski town of Telluride.

Powderhounds worried about how climate change will affect their snowpack and wanted San Miguel to serve them up some solar power. But they live in a shady box canyon on expensive land, the kind of place where solar can’t pencil out. What to do?

The San Miguel co-op started looking around for solar projects. First they tried to build a traditional solar farm, but opposition from not-in-my-backyarders was fierce. Finally they hit on community solar and opposition relaxed, allowing the co-op to build a 1.1-MW array and find 120 customers, the largest of which is the Telluride school district.

"When we reframed it in terms of community solar, when people could buy into it and own it, it became easier to accept," said Wiley Freedman, San Miguel’s manager of member services. He estimated that 5 to 10 percent of the subscribers are members from conservative-leaning areas who have come along for the ride.

In Tennessee, the Middle Tennessee Electric Membership Corp. is the main utility for four counties southeast of Nashville, all of which Trump won by a margin of at least 60 percent.

Yet it built a 1-MW community-solar project last year that has sold out most of its 549 blocks. Who asked for it? An influx of young people coming to work for Nissan, the Japanese automaker, which has its U.S. headquarters in Franklin and a factory in Smyrna, in Rutherford County, home of the all-electric Nissan Leaf.

But the interest has been broader than expected. "We have members from all four counties signing up for this," said Mandy Pinion, the energy programs coordinator at Middle Tennessee Electric, noting that the array’s prominent location on Horton Highway has turned some heads.

But the link between community solar and rural utilities is about a lot more than politics.

If Democratic leanings were all that were needed to assure solar success, then Vermont Electric Cooperative, in deep-blue Vermont, would be sold out. But it isn’t. Its 1-MW community-solar array is only 60 percent subscribed. Nonetheless, the utility is moving forward to build two more, one of 1.6 MW and another of 5 MW. The reason is that solar is getting cheap — 4 cents below the price of retail, said the utility’s CEO, Christine Hallquist.

"Even if our members do not sponsor the panels, the price of power is very competitive from a long-term perspective," she said.

Executives at rural co-ops give other reasons solar is appealing. It is a hedge if other energy sources, like natural gas, get expensive someday. Also, co-ops have discovered a new competitor: rooftop solar installers. A little co-op, with a little grid, can ill afford to lose its customers to installers who promise energy independence.

That’s the worry of Curtis Trivitt, a vice president at CoServ Electric, a co-op that serves the suburban ranchettes springing up north of Dallas.

On the face of it, he has little cause for concern. Only a handful of his 201,000 customers today have rooftop solar, and only about 75 new projects come online each year. But his members are prosperous and inclined to like solar. He considers CoServ’s 2-MW community-solar project as his best defense.

"Can we do it at a better price than someone can do it on a rooftop?" he asked. "Some of these folks, if we don’t figure out how to provide those renewable options, they’re going to go out and do it on their own."

And another agent in the co-op world is serving as a solar force multiplier.

Some co-ops provide generation and transmission (G&T) to dozens of other smaller co-ops, and these parents are getting in on the act. In Georgia, for example, Oglethorpe Power is the G&T provider to 38 co-ops, and 32 of them are now participating in solar projects, with most of them being community solar. All told, solar is now providing 240 MW of solar to cooperatives in the state, according to Jeff Pratt, the president of Green Power EMC, a subsidiary of Oglethorpe.

"It’s getting to the point where the co-ops are considering it as an important source of energy," Pratt said. "I wouldn’t say significant, but important."

Co-op enthusiasm for solar is an about-face from several years ago. Back then, many co-ops strongly opposed state renewable energy portfolios that require utilities to generate a certain amount of clean energy. They sought to be exempted, mostly successfully, said Leah Stokes, an assistant professor of political science at the University of California, Santa Barbara, who studies the politics of renewable energy.

Now, a combination of economics and politics may be starting to turn rural solar on its head.

"It’s different what they’ll do when solar actually comes to town," said Stokes, who pointed out that in general, solar has few advocates on the right. But such a credo, she added, "goes to the wayside and they update their beliefs, based on whether they’re receiving benefits or costs based on what they see in their backyard."

Thanks to local co-ops, more and more rural conservatives are getting their first exposure to solar power. And if trends hold, those power companies will have more and more reasons to sell it to them.