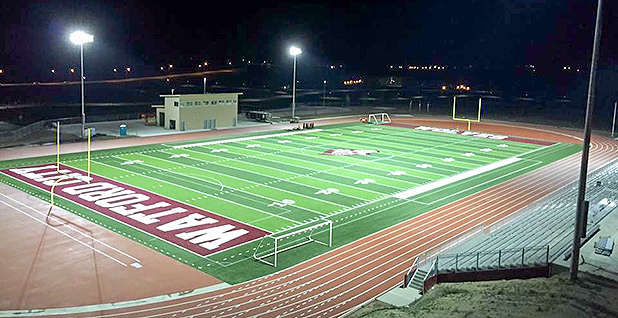 A view of Watford City's new high school football stadium. The town borrowed money to pay for the stadium and an adjacent sports complex because the local school district didn't have enough funds. The oil bust could make it tougher to pay off the loans. Photo courtesy of Watford City.

Watford City had become the epicenter of the Bakken Shale oil boom. As a result, people were pouring into the town and the 30-year-old high school badly needed replacing. But the McKenzie County School District’s finances hadn’t caught up with its population growth. It couldn’t borrow enough for a new building using conventional school financing, much less the ballfields and gym facilities that the town wanted.

The result was a hybrid project. The school district came up with $54 million in loans and grants to build the classrooms, and the city government borrowed $94 million to build a complex including a football stadium and an indoor event center with a 3,000-seat basketball arena, two hockey rinks, and a meeting space for sports and local clubs. The various loans are backed by property taxes, sales taxes, and the local share of state oil and gas taxes.

The hybrid’s a good example of the kind of creative financing that local governments used during the peak of the Bakken Shale boom to pay for basics like schools, roads and sewer plants. It also demonstrates the risk that communities in America’s oil patch face as the oil bust stretches into its third year.

If the oil industry recovers, Watford City will have plenty of tax money to pay off the loans, and the industry will carry most of the financial burden. But Watford City’s taxpayers could be on the hook for those loans if the oil industry falters and tax revenue falls short, which has already happened once. And there’s a looming chance that the state Legislature could change how it allocates oil taxes, which could also shift the burden onto the local population.

Watford City’s leaders say the project helped fund basic services during the town’s astonishing growth, and they believe the oil industry’s recovery will only strengthen. Outside observers worry that Watford City and other communities could fall into the trap that’s hit other busted oil towns, in which a shrinking population is forced to pay higher and higher taxes to pay off the debt.

"This is the story of North Dakota," said Barry Rabe, a professor at the University of Michigan’s Gerald R. Ford School of Public Policy who’s studied state and local finances in oil country.

Even before oil was discovered in North Dakota, the state went through a series of agricultural booms and busts, including a boom in wheat production that ended with the Great Depression of the 1930s. North Dakota’s population fell steadily from the 1930s until the 1950s, according to the U.S. Census Bureau.

Oil production began in the western part of the state in ’50s, but the oil bust of the 1980s struck hard. Williston, about 45 miles north of Watford City, was saddled with unpaid debts for years, said Ward Koeser, who was the town’s mayor from 1994 to 2014. During parts of the 1990s, the city was so strapped for cash it couldn’t pay for routine maintenance or equipment repairs, Koeser said.

When the Bakken Shale boom began, a lot of communities, including Williston and Watford City, tried to avoid the mistakes of the ’80s by keeping their debt low. Their populations grew so fast, though, that they were forced to borrow for big-ticket projects like water and sewer plants.

Now, the combination of high debt levels and the dip in taxes is straining a lot of communities in western North Dakota. Williston already has a junk-level credit rating, and Moody’s Investors Service downgraded it again in July. Dickinson has also seen a drop in its oil-related taxes, Moody’s said.

Adding to the tension is the notion that the oil industry could be in for a long-term decline, under the combined pressure of new technology and the need to reduce emissions that cause global warming (EnergyWire, Oct. 31).

Watford City, the county seat of McKenzie County along the Montana border, stands out because its population has grown so fast and because of its high level of debt, said Daniel Raimi, a researcher at the Washington, D.C., think tank Resources for the Future.

Before the boom hit, Watford City was a sleepy town of about 1,700, according to Census data. Its population nearly quadrupled to about 6,700 as of 2015, according to the Census Bureau.

The growth put the local schools in a bind. The McKenzie County School District desperately needed a new high school so it could spread all the new students out and relieve crowding at its other campuses. There were 10 portable classrooms at the elementary school alone. But the school district couldn’t borrow all it needed for a new school because of a quirk in North Dakota law, Superintendent Steve Holen said.

Unlike a lot of oil-producing states, North Dakota school districts don’t collect property taxes on the value of oil and gas reserves, although the district does tax other industrial property such as pipelines. That limited how much the school district could borrow, even with its population bulging, Holen said.

There was enough for a school building, but no ancillary facilities like a football stadium, Holen said. The City Council realized that Watford City needed recreational facilities for the young families moving into the area, and the only way to build it was with city funds, Mayor Brent Sanford said.

The solution was the event center, dubbed the Rough Rider Center. At 270,000 square feet, the main building is two-thirds bigger than the high school. Together, the two buildings and the stadium cover an area the size of a suburban shopping mall, about a mile and a half east of Watford City’s main street.

Even with the city pitching in, financing is complicated. The school district financed $27 million through a bond referendum, took out a $10 million loan from the state-run Bank of North Dakota and pulled the rest together with grants and other sources. The city sold about $40 million in bonds and got $54 million in loans from the Bank of North Dakota and other banks. Both of the state bank loans are repayable with the local share of oil and gas taxes.

Holen, the school superintendent, said it’s an example of the town’s ability to adapt.

Growth has a high price tag

In all, Watford City’s municipal government has about $150 million in debt, including $94 million for the event center, $30 million for a sewer plant and $25 million for infrastructure in a special tax district where the city’s trying to promote development.

Sanford said the city tried to learn the lessons from previous oil booms and busts, which left neighboring towns with high debt levels. The City Council turned down several requests to float bonds for private developments.

Sanford said, "$150 million does sound like a lot. But it could’ve easily been two or three times that if the City Council had been very bullish with debt and listened to every opportunity for every developer along the way."

Both the school and the event center are popular locally, in part because they’re being paid off by people from outside the community, either through sales taxes or oil taxes. Voters approved the bonds for the school by more than 90 percent in the spring of 2014. A sales tax increase to pay for the event center bonds and other projects passed by 83 percent that summer.

The summer of 2014 is when the oil bust started. Oil prices peaked above $105 per barrel in June, and fell to less than $55 a barrel by the end of the year and it kept falling. This spring, it dipped below $30 a barrel.

Watford City’s tax revenue plummeted as companies shut down oil rigs and laid off workers. The city needs a little under $200,000 a month from sales taxes to pay the bonds on the event center. In April, it pulled in $112,321 and had to dip into its reserves to make up the difference.

The city’s share of oil taxes fared a little better but still came close to falling below the monthly loan payments, which total about $610,000.

Since then, sales taxes have recovered to about $300,000 a month and the local share of oil taxes has hit about $1 million a month, alleviating the pressure.

There’s reason for caution, though. Just last week, North Dakota’s chief oil regulator acknowledged that the oil bust could last longer than a lot of previous predictions. If the price of oil stays under $60 a barrel, the rig count in the state will remain depressed for years, said North Dakota’s Mineral Resources Director Lynn Helms during a presentation to the North Dakota Association of Oil and Gas Producing Counties.

North Dakota’s oil production has fallen from 1.2 million barrels a day in 2014 to 981,000 barrels a day in August. Helms still said the most likely scenario is that oil prices will rise, bringing more drilling and more revenue, but it was an unusual note of pessimism (EnergyWire, Oct. 27).

And even if oil production doesn’t falter, Watford City and other communities in the Bakken Shale region are dependent on revenue-sharing from the state Legislature. The state faced its own budget crunch this year and may have to cut the amount of oil revenue it distributes to so-called hub cities in the oil patch.

The funding formula for the local share of oil taxes, known as gross production tax, or GPT, is scheduled to expire at the end of the state’s two-year budget cycle, Sanford said.

"That is of high concern for the hub cities," Sanford said in an email.

"McKenzie County and Watford City rely on the traditional GPT funding formula for political subdivisions, which is based on actual oil and gas produced within the county," he said.

Still, Sanford and City Administrator Curt Moen said the worst of the oil crunch is over. The high school and event center are now open, and the area around Watford City continues to see a lot of drilling despite the overall drop in production.

"As long as they leave things alone, you know, we’re OK," Moen said.