‘A test of governments.’ Oil industry faces worst glut ever 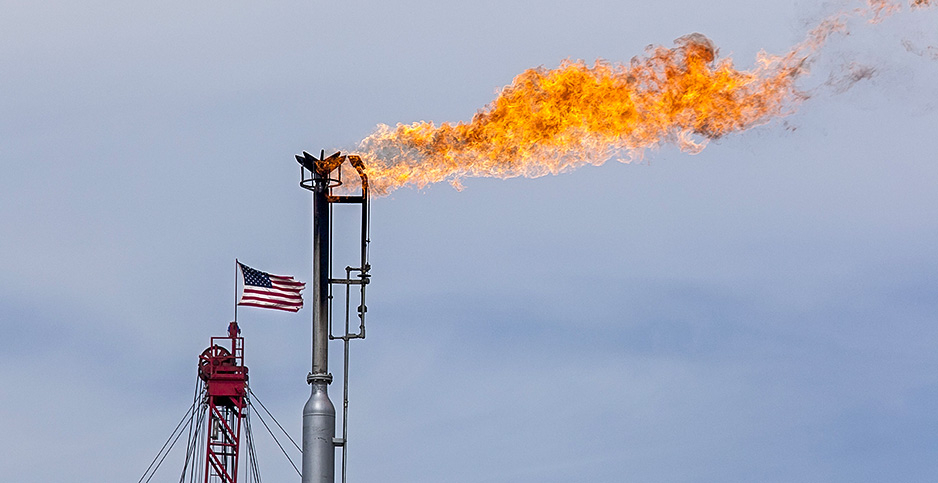 Natural gas is flared off as oil is pumped in the Bakken Shale formation. Shale drillers will be among the hardest hit oil producers as the price of crude continues to fall, according to one analysis. Jim West/agefotostock/Newscom

The oil industry could be facing the worst supply glut in history and start running out of storage space for excess oil because of the coronavirus pandemic, analysts warned yesterday.

As the outbreak dampens the economy and forces people to stop traveling, oil prices are continuing to plunge as supplies rise.

Goldman Sachs predicted in a research note that Brent oil, the international standard, could fall to $20 a barrel by the middle of the second financial quarter. Prices dropped yesterday as more countries imposed quarantines and travel bans and as a price war sparked by Saudi Arabia and Russia dragged into its second week.

"If this situation persists amidst a recession, it points to the possible buildup of the most extreme global oil supply surplus ever recorded," Jim Burkhard, vice president and head of oil markets at the consulting firm IHS Markit, said in a research note.

In the past, a drop in oil prices has been a boon for consumers, but this time, it could damage the broader economy, Amy Myers Jaffe, director of the energy and climate program at the Council on Foreign Relations, said in a podcast.

"If this turns out to be a prolonged financial crisis … and the oil price stays low, then I think we’re going to see some much more systemic problems, especially in the United States, that probably need to be addressed now — sooner rather than later," she said.

Demand for drilling rigs could fall by 50% over the next 12 months, according to the investment bank Tudor, Pickering, Holt & Co. Even energy companies that are insulated from oil prices, like the pipeline giant Kinder Morgan Inc., could see their earnings fall.

"The simple answer is no midstream company will be wholly secured against the current environment," the bank’s analysts wrote in a note.

The analytical firm Rystad Energy further estimated that the industry as a whole will cut its spending on conventional oil projects by more than half, from $179 billion to about $80 billion. And even then, companies will have a hard time generating free cash flow, a measurement of profit after accounting for capital expenses.

"If the average Brent oil price were to end up at $30, free cash flow would likely land just above zero," Rystad said in a report yesterday. That’s worse than the last downturn, which lasted from 2014 to 2016.

U.S. shale producers, whose costs are higher than those of producers in most Middle Eastern countries, are likely to be hit hardest. West Texas Intermediate crude, which is the U.S. standard, fell below $27 a barrel yesterday.

"Unless the WTI price returns to $40 a barrel, U.S. oil production is likely to decline in 2020," the Rystad note said.

In North Dakota, home to the Bakken Shale, state Department of Mineral Resources Director Lynn Helms told reporters that half of the 56 drilling rigs in the state would likely stop operating. The price drop will also affect the state budget.

The Trump administration proposed this week as much as $1 trillion in an economic stimulus package, on top of a previously announced aid bill and a plan to buy oil and store it in the U.S. Strategic Petroleum Reserve (Energywire, March 16).

The House passed a package last week to assist workers and small businesses. The measure still hasn’t cleared the Senate.

Senate Majority Leader Mitch McConnell (R-Ky.) said yesterday that the Senate would pass the House aid bill quickly and begin work on an additional "much larger" economic stimulus package. He said the Senate won’t leave town until both pieces of legislation pass.

"We’re going to move here at warp speed, for the Senate, which almost never does anything quickly," he said.

"These are not ordinary times. This is not an ordinary situation," McConnell told reporters. "So it requires extraordinary measures."

McConnell said he’s created three Republican task forces to tackle the larger piece of legislation, for which the White House is seeking $1 trillion. McConnell noted that some of his members were unhappy with the initial House aid package, but he told them "to gag and vote for it anyway, even if they think it has some shortcomings."

Treasury Secretary Steven Mnuchin said his discussions with President Trump about the package included payments to small businesses, loan guarantees to critical industries like airlines and hotels, and payments to American workers.

"We are looking at sending checks to Americans immediately," Mnuchin said at the White House. "Americans need cash now, and the president wants to get cash now. And I mean now, in the next two weeks."

He called the effects on the economy "worse than 9/11."

Senate Democrats are seeking at least $750 billion but want most of the money to go to health care, paid family and sick leave, unemployment insurance, and assistance for small businesses.

Senate Minority Leader Chuck Schumer (D-N.Y.) noted that Trump has been talking to various industries but said, "We just want to make sure that whatever help we give them, workers come first. The vast majority of aid should go to the workers, not to increasing executives’ salaries."

Fatih Birol, director of the International Energy Agency, and Mohammad Sanusi Barkindo, the OPEC secretary-general, also said this week that developing countries could lose up to 85% of their oil and gas income this year because of impacts from the coronavirus, which causes COVID-19.

That revenue loss could have "major social and economic consequences," according to a press release summarizing their phone call, including in the education and health care sectors.

Over the weekend, Birol said governments should not lose sight of the transition to clean energy amid uncertainty surrounding the current pandemic and should use the recent global oil price collapse to get rid of subsidies for fossil fuel consumption.

Climate change is a long-term threat, he said, adding that governments should factor it into the stimulus packages they’re considering to offset the economic damage rendered by the outbreak.

"Taking these steps is extremely important because the combination of the coronavirus and volatile market conditions will distract the attention of policy makers, business leaders and investors away from clean energy transitions," Birol wrote in a post. "This situation is a test of governments and companies’ commitment. Observers will quickly notice if their emphasis on clean energy transitions fades when market conditions become more challenging."