A Texas waste storage plan is back. So is the opposition 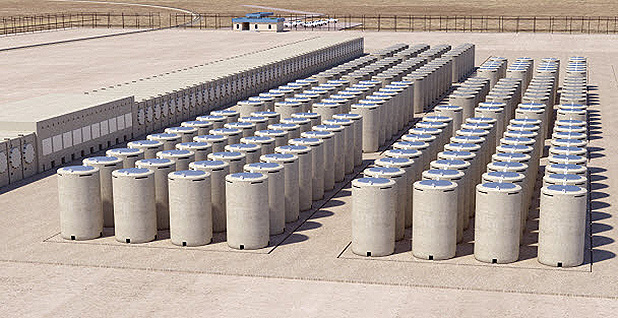 A proposal to send used nuclear fuel to West Texas didn’t end last year, but it did stall during a trip to corporate purgatory.

Now a joint venture called Interim Storage Partners LLC has the plan moving forward again. The Nuclear Regulatory Commission recently restarted its review of a consolidated interim storage application for a site in Andrews County, Texas. And the NRC staff’s safety, security and environmental reviews could be finished in summer 2020.

Critics are worried about what’s brewing. They’re asking questions and hoping for more public meetings. Some would like to halt the project. One of the chief opponents knows the proposal won’t be easy to stop, but she’s working to rally Texans and others against the plan.

"Most people don’t even know this is happening," said Karen Hadden, executive director of the Texas-based Sustainable Energy and Economic Development Coalition. "The public is unaware, and they’re unaware of the risks that they are about to be exposed to."

ISP said in a statement that the joint venture "combines the strengths of Orano’s decades of expertise in used nuclear fuel packaging, storage and transportation with WCS’ experience operating a unique facility serving both the commercial nuclear industry and the U.S. Department of Energy." There’s a WCS information center in West Texas for people to seek more information. ISP also has a website about its plans.

Much of nuclear waste critics’ focus had turned to an interim storage proposal from Holtec International for New Mexico. That plan is also under review at the NRC (Greenwire, May 9).

Instead of using the proposed interim sites or Yucca Mountain, Hadden would like to see the United States pursue a new location for a permanent repository that’s geologically sound and uses improved storage technology.

The meeting covered aspects of the response plan and gave people a chance to interact. At one point, a speaker said that "nobody lives anywhere near us." That was followed by a description of the location as "in the middle of stinking nowhere." The remarks drew laughter as well as an unhappy response from a listener on the phone who wasn’t sure who made them.

"The intent of the comments was to emphasize the benefit of there being no residences within ISP’s Emergency Planning Zone for nearly four miles from the site in all directions," Isakson said in the statement.

He apologized on behalf of ISP for "a poor choice of words by a technical team member." And Isakson said operating safely for the region’s people, wildlife and environment is a priority.

"I want to point out that we’re having an emergency because our regulatory agency is failing to allow citizens to ask questions that are appropriate to protect themselves," Smith said, adding: "Our mouths are being taped shut because of actions by this commission."

An NRC representative said the meeting was ending due to time constraints and that some questions were beyond the meeting’s scope. He said various venues are available for questions and concerns.

There’s an "opportunity for the public to be involved as part of that," he said.

McIntyre noted that ISP’s application and the NRC’s review is specific to the storage facility. If a license were granted, he said, ISP would decide what transportation packages and routes to use.

Hadden argued future NRC requests for additional information could bring up new issues the public should be able to examine, so NRC deadlines should be extended. Critics say there is already a new financial situation to analyze in terms of ISP’s involvement.

"That just strikes me as illustrative of the lack of attention to detail that’s needed when you’re dealing with radioactive waste," she said. "It’s just one example that’s sloppy."

Questions also remain about potential congressional action that could amend the Nuclear Waste Policy Act. The House passed a bill this year to help reform U.S. nuclear waste management (Greenwire, May 10). It would need to pass in the Senate to move forward, though the outlook is uncertain. In May, the CEO of the Nuclear Energy Institute praised the House vote as a step toward implementing "the federal government’s statutory obligation to manage used nuclear fuel."

"There’s been a long history of WCS working with the community and the community being comfortable with WCS," Isakson said. "We don’t want [to] take it for granted."