A weakened CEQ gets a chance to flex its muscles 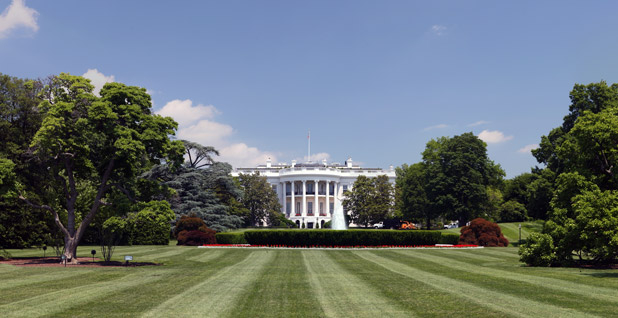 The White House Council on Environmental Quality has been tasked with coordinating the Trump administration’s plan to streamline infrastructure project reviews. Daniel Schwen/Wikipedia

The short-handed and seemingly sidelined White House Council on Environmental Quality could reclaim some of its mojo as it coordinates the Trump administration’s controversial plan to streamline infrastructure project reviews.

Or maybe it could simply remain relevant, which in the bureaucratic jungle would be a victory in itself.

"The questions will be, what is the pace they will move at, and how bold will their recommendations be?" said Michael Gerrard, a professor and director of the Sabin Center for Climate Change Law at Columbia Law School.

The irony now is that CEQ, the very office that the Trump White House seemed intent on marginalizing, could under the right circumstances become the administration’s biggest lever in dislodging how the wide-ranging National Environmental Policy Act works.

"This is a new role for CEQ," noted attorney Cynthia Taub, with the firm Steptoe & Johnson. "The agency has generally been seen in the past as overseeing NEPA implementation to ensure minimum standards were met, and in some cases potentially pushing other agencies to do more."

Now, Taub added, "CEQ is being asked to help agencies scale back on NEPA reviews in order to streamline the process, especially for infrastructure or other ‘high priority’ projects."

With a $3 million annual budget and a staff of about two dozen full-time employees, CEQ and the associated Office of Environmental Quality have by design a very small White House footprint.

The White House’s Office of National Drug Control Policy, by contrast, employs upward of 75 full-time employees and commands a budget of about $20 million. The Office of Science and Technology Policy’s staff is likewise larger than CEQ’s.

In theory, though, CEQ can punch above its weight, through its power to issue NEPA guidance and regulations. Between 2008 and 2012, for instance, the Energy Department alone completed 9,060 analyses under NEPA, according to the Government Accountability Office.

The Trump administration seemed to signal CEQ’s lessening clout with an early directive moving the staff out of its longtime Washington quarters (Greenwire, Feb. 23). Seven months into his administration, Trump has yet to nominate a permanent CEQ chair.

In any White House political ecosystem, settled leadership, physical proximity to power and concentration of staff can all enhance influence, while vacancies, distance and dispersal can undermine it.

"CEQ will have as much or as little a role as the White House will let it," Gerrard said.

Individual appointees, too, can expand an office’s clout or diminish it.

In the Clinton administration’s Office of National Drug Control Policy, for instance, retired Army Gen. Barry McCaffrey used his stature, budget oversight and bureaucratic savvy to make the drug czar’s position appear more powerful than it had been before or has been since.

At CEQ, too, some of the 13 chairpersons who have served since the office was established in 1969 have proved more adroit and willful than others in pushing against the inevitable bureaucratic resistance from Cabinet-level departments and career staffs.

"CEQ’s influence may vary from agency to agency, as some agencies may be more receptive to change than others," Taub said.

In the absence of a permanent CEQ chair, two individuals affixed their names to the initial action plan unveiled this week. One was former House Republican staffer Mary Neumayr, who is now CEQ’s chief of staff. The other was Ted Boling, a career federal employee whose title is "associate director for the National Environmental Policy Act."

CEQ’s notice this week did not identify deadlines for the various actions that will be undertaken.

It did, however, specify that the office will use its existing authority to interpret NEPA in a way "that reduces unnecessary burdens and delays as much as possible." The stated focus is on infrastructure projects, which might cover a wide range.

In one clue for where CEQ could be heading, the notice makes several references to "categorical exclusions," which can free certain projects from normal review requirements.

"This could possibly mean we’ll see a lot of categorical exclusions for things like oil and gas projects," Hanceford said, further predicting that "we’ll see efforts to roll back transparency and public participation."