About that budget deal, don’t expect a windfall for climate 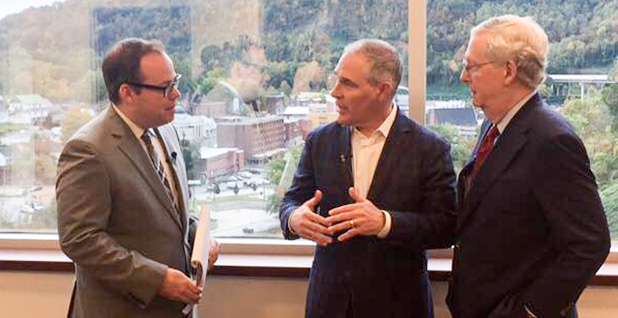 Congress approved a sweeping budget deal early this morning that would dramatically raise domestic spending levels over the next two years, potentially making agencies across the government flush with new cash.

But don’t expect climate programs to be among the big winners.

"I would be exceedingly surprised if we saw a dramatic uptick in climate spending," said McKie Campbell, an energy consultant at BlueWater Strategies and a former aide to Sen. Lisa Murkowski (R-Alaska).

The budget deal paves the way for lawmakers to funnel almost $300 billion over current spending levels into the military and domestic programs through 2019, giving greens and Democrats hope that environmental efforts could see a boost. But with President Trump in the White House and Republicans still in control of both chambers of Congress, it appears unlikely that climate programs at agencies like U.S. EPA, the Commerce Department and others will see a windfall.

"Overall, there should be additional spending for environmental programs, but that doesn’t mean Republicans aren’t going to try and take a whack at programs they oppose, including climate change," said Jim Manley, a former aide to Sen. Harry Reid (D-Nev.).

The deal was briefly upended last night by a five-hour government shutdown. Sen. Rand Paul (R-Ky.) seized the chamber floor for several hours to protest the spike in spending. His filibuster prevented lawmakers from voting on a funding fix before midnight, when temporary spending expired.

Senators, many of them fuming over Paul’s gambit, passed the budget deal around 2 a.m. on a vote of 71-28. The House voted a few hours later, approving the measure 240-186.

Critics of the Trump administration’s climate policies are hopeful that having more money to go around will mean Republicans have a tougher time justifying steep cuts to environmental programs, such as the dramatic reductions advocated by the White House. Trump last year proposed a 31 percent cut to U.S. EPA, reductions that weren’t enacted by Congress. But he’s expected to again propose chopping that agency when his fiscal 2019 budget proposal is released Monday.

Some environmentalists have a plan to push lawmakers to increase EPA’s budget in light of the two-year spending deal.

"The simple metric we are applying is that the EPA budget should be increased over the next two years commensurate with the overall increase in non-defense discretionary spending that will be available under this budget agreement," said Elgie Holstein, senior director of strategic planning at the Environmental Defense Fund.

"We already know that the administration is going to propose cuts in some of the most important work that supports a cleaner energy future," Holstein said, referring to a leaked document showing that the White House plans to propose cutting the Department of Energy’s renewables and energy efficiency programs by 72 percent in fiscal 2019.

And at EPA, he said, "we suspect the administration is going to continue to resist anything that looks like a step forward on climate."

Proponents of Trump’s plans to downsize EPA and its climate programs want to see the administration double down on its proposed reductions. "I’m hoping that they will be proposing cuts similar to last year," said Myron Ebell, director of the Center for Energy and Environment at the Competitive Enterprise Institute and a former leader of Trump’s EPA transition team.

Of course, the White House budget proposals historically have been cast aside by Congress as lawmakers pursue their own priorities.

For example, after Trump suggested slashing EPA’s budget by about one-third, appropriators in the Senate sought to trim EPA spending by about 2 percent from fiscal 2017 levels, while House lawmakers sought a 9 percent reduction (Greenwire, Nov. 21, 2017).

"The president’s budget was a message vehicle, and the appropriations bill is a funding vehicle," said Jim Moran, a former Virginia Democratic lawmaker who served as the top Democrat on the House subcommittee that oversees Interior and environmental spending. "For the most part, appropriators are pragmatists; they’re doers, and they know what’s going to pass on the floor."

Count him among those who don’t expect to see big upticks in environmental or climate spending even as more cash flows to agencies.

"I don’t think EPA is going to get much of a boost," Moran said. With Administrator Scott Pruitt at the helm, "the environmentalists are just playing defense now," he said.

The goal for EPA, he added, is "to basically survive for the next year or so." Ultimately, "as long as they’re still standing when you get somebody at the helm of EPA that’s more of an advocate for EPA’s mission, it just needs to still be in place with a moderate level of funding."

Democrats would gain more leverage in the appropriations battles if they reclaimed either or both chambers in this year’s midterm election, Moran noted, although he said, "I don’t think that’s a given, by any means."

For now, he said, when it comes to climate and environmental spending, the budget will be "basically on hold in those areas."