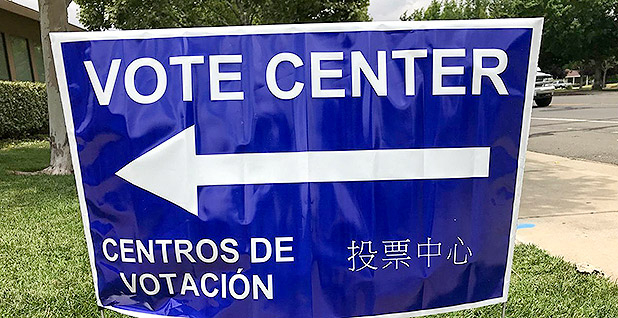 The results of California’s primaries tomorrow will determine candidates for the Golden State’s next governor, the U.S. Senate and 53 congressional seats — including seven held by Republicans that Democrats have their eyes on in hopes of flipping the House.

As such, the top contests for governor and Senate could see two Democrats win the primary and advance to November, while there’s a chance some House seats could end up with two Republican finalists.

Republicans, aware that this could be a wave election in Democrats’ favor, appeared eager to stem the tide and were voting early in many important races.

"They’re not going to get all seven that’s for sure," GOP strategist Kevin Spillane said. "They’ve got a real possibility to get one or two. It’s hard to tell which one."

California’s open primary has prompted concerns among Democrats that they could end up with no candidates in some of the House races.

EMILY’s List and a Democratic independent expenditure group are spending heavily in the race for Democrat Sara Jacobs, an education nonprofit CEO. She’s the granddaughter to Irwin Jacobs, co-founder and former chairman of Qualcomm Inc., a telecommunications company.

It’s a question of whether retired Marine Col. Doug Applegate (D) — who narrowly lost to Issa in 2016 — and Mike Levin, a clean energy advocate, can break through, Spillane said. The Sierra Club and California League of Conservation Voters (CLCV) both endorsed Levin.

With so many candidates including credible Republican candidates, it’s hard to forecast the outcome, Gonzales said, and it could be "two Democrats finishing at the top, two Republicans finish at the top or one of each."

It’s a conservative district, Tony Quinn, analyst with the California Target Book, has said. If Rohrabacher and Baugh split the GOP vote fairly evenly, they could nab the top two spots and advance to November’s election.

Democratic groups are working to hurt Baugh and help Harley Rouda (D), a businessman who has largely self-funded his campaign. The DCCC threw support behind Rouda, over stem cell researcher Hans Keirstead, the party’s original recruit. That was after a poll that showed Rohrabacher with 30 percent of the vote and Rouda, Keirstead and Baugh all drawing 13 percent. Rouda is seen to have better grassroots support.

Republican candidate Young Kim, who worked for Royce as his director of community operations and served one term in the California Assembly, looks likely to win one of the primary’s top two spots, Gonzales said.

Other Democratic candidates include Andy Thorburn, who started an insurance business, Mai Khanh Tran, a pediatrician, and Sam Jammal, an attorney who worked in President Obama’s Commerce Department and later for Tesla.

"Democrats are feeling better about the race, but I wouldn’t say it’s a certainty that Cisneros or a Democrat gets in," Gonzales said.

For example, in Royce’s district, Republicans comprise 36 percent of those who received mail-in ballots.

"That’s the one thing that gives de León hope to get to November," Spillane said. "Odds are that [de León] will score the second spot, but there is a chance for a Republican to outpoll him. I couldn’t tell you which one."

If Feinstein and de León win first and second, he’ll need to put together a coalition of progressive Democrats and Republicans who "don’t have a home," Gonzales said.

Asked whether conservatives wouldn’t more likely support Feinstein, Gonzales said that some GOP voters might pick de León as a kind of outsider, "if he’s viewed as the fresher face." He added, however, "I’m not sure I believe he can put that coalition together."

Depending on who gets the second spot, Newsom will either have a brawl through November or coast to the governor’s mansion, several analysts said.

"If Villaraigosa can get that second spot, it will be a very competitive governor’s race in November," Spillane said. "If Cox gets it, it won’t be that competitive. Newsom will win easily for a number of reasons. Republicans aren’t that competitive in the state."

Newsom and Villaraigosa are both seen as environmentally friendly. Newsom pledged he’d call for 100 percent renewable energy from the start and wants to overhaul the transportation sector. Villaraigosa wants the state’s carbon cap-and-trade program reformed to force more direct emissions reductions at facilities.

He’s to the right of Newsom on one green issue, advocating reform of the California Environmental Quality Act (CEQA), a law developers loathe.

Newsom, meanwhile, in an ad posted on Facebook, painted Cox as in sync with Trump. That’s actually an effort to get Republicans to vote for Cox, so that Newsom can face him and not Villaraigosa in November, said Gonzales.

Cox can’t beat Newsom, Gonzales said, adding, "I don’t think this is the type of cycle where California is in the mood to elect a Republican governor."

He noted, however, that while Republicans don’t have top ticket contenders, party leaders are anxious to drum up the vote because there is more at stake than just these statewide races.

"There’s some Republican concern that if the Senate race and the governor’s race are a lost cause for Republicans, that will depress Republican turn out," in November, "and that will hurt Republicans’ chances of holding all those competitive House seats at the congressional level," Gonzales said.