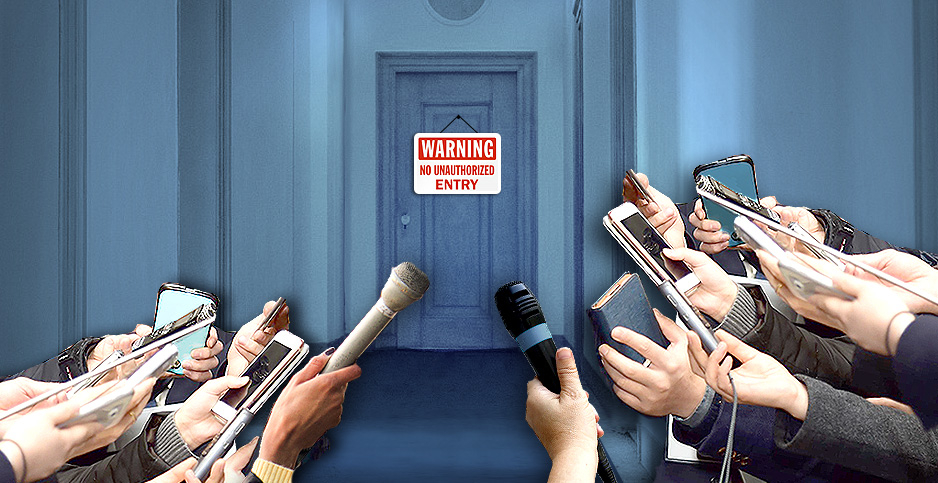 Access to some federal agency researchers has been limited in recent years. Claudine Hellmuth/E&E News (illustration); NeedPix(door);Mr. Tin DC/Flickr and Pixabay (hands with phones and microphones)

Bobby Magill knows all too well the challenge of getting a federal agency scientist on the phone for an interview on deadline.

The president of the Society of Environmental Journalists, who is also an energy and public lands reporter at Bloomberg Environment, has been reporting on public lands issues since the George W. Bush administration.

Over the years, starting under President Obama, Magill had noticed a shift in how certain agencies allowed their researchers to respond to media requests.

"I tell you it varies by agency. Speaking from my own experience, access to experts within agencies is extraordinarily difficult to gain," he said.

"I’ve been told by researchers there that they are not allowed to talk to press without prior authorization from D.C.," he said.

Restrictions on picking up the phone and dialing up an agency expert pose challenges for journalists covering the science underlying policy decisions. Reporters working to meet tight deadlines may have to forgo expert comment or background.

The restrictions have taken on added significance in recent years as outside experts have challenged the research and methodology federal regulators have used to justify undoing Obama-era regulations.

Now Democrats in Congress are aiming to help clear the path for greater access for reporters through newly introduced legislation.

The "Scientific Integrity Act," H.R. 1709, would allow reporters to directly reach out to agency researchers for insight on agency science and technical information. If scientists are not available, agencies would need to make a knowledgeable public affairs official available.

The House sponsor is Rep. Paul Tonko (D-N.Y.), a senior member of the Energy and Commerce Committee. Sen. Brian Schatz (D-Hawaii) has a companion, S. 775.

Republicans are not on board, however. In a House Science, Space and Technology hearing, they suggested Democrats were acting out of dislike for Trump administration policies (E&E Daily, July 18).

Reporters, however, have long noted challenges speaking with experts that pre-date the Trump administration’s deregulatory agenda.

Those tracking access to agency experts say the desire by press aides to either control or monitor reporters has evolved over time. It has not been the result of any specific directive by an administration to be more restrictive to the press, they say.

One major issue for agencies has been making sure staffers focus on the science rather than implications for policy. But even that is complicated when political appointees often disagree with their own employees.

Magill described agencies as being "quite open" during the Bush administration.

"At the local level in western Colorado, I never used to have any issues accessing public land experts at any level locally, or even at the state level," he said.

"That started to ratchet down during the Obama administration," said Magill. "Things seemed to turn with the EPA around the time the Clean Power Plan was proposed, and prior to that it seemed a lot easier to access agency officials."

The National Park Service within the Interior Department is "a bright spot," with fairly accessible experts, he said. The Bureau of Land Management is "decent." The Forest Service, on the other hand, has been much more difficult. "Every agency is a bit different."

Last year, the Los Angeles Times reported that researchers at the U.S. Geological Survey would now have to get permission from Interior before speaking with the press under a new protocol.

Access to EPA under Trump has come under particular scrutiny as the communications office has engaged in what Magill described as a "very adversarial relationship" with the press. EPA "does not appear to be interested in giving us access," Magill said.

Dan Costa, the former national program director for the Air, Climate and Energy Research Program, said under the Obama administration, researchers were supposed to give the communications team a heads-up before talking to the press, and often the communications staff wanted to have someone listen in.

"Some folks were discouraged from talking to reporters simply because they were not very press savvy; the comfort level of management varied with the expertise of the person. And yes, folks needed to be clear to distinguish personal opinions from those of the agency," he said in an email.

Costa said he personally did not shy away from talking to reporters and didn’t notify the communications staff before doing so, noting that he was experienced and "knew where the electric fence was."

Costa continued to work at the agency until 2018, and he noted his own relationship with the press changed under the new administration.

"In Trump’s EPA, I was cautioned against speaking about climate change; the hostility about anything related to climate change or global warming coming from the top was apparent. I continued to talk to the press on background, but most career staff bunkered," said Costa.

Mustafa Santiago Ali, EPA’s former environmental justice administrator, left the agency in 2017. He said that under the Obama administration, he had been free to talk to the press both on and off the record, but that changed when former Administrator Scott Pruitt took the helm.

"When Pruitt came in, the drawbridge was raised, the gate was slammed down and employees knew you were not to talk to the press. They didn’t want people commenting on their dangerous policy actions and even today they try to silence those who have been working on science, those who are on federal advisory action committees (FACAs) and even the voices of communities in the permitting process," he said in an email.

To be sure, Obama-era press teams were often hesitant to share information and were regularly a barrier between reporters and officials. A former EPA press aide said the agency followed its scientific integrity policy on journalist access to experts.

A current EPA spokesman responded to the former officials’ critiques, saying EPA followed practices similar to those of other federal agencies.

"EPA — like all federal agencies, private companies, and many other entities — has a press office that fields all media inquiries. We work collaboratively with all program and regional offices when media requests are made, and will work with career and political staff to facilitate responses to the media," said Michael Abboud, EPA’s press secretary.

Magill, who cautioned he had not seen the details of the "Scientific Integrity Act," nevertheless approved of the general aim of broadening reporters’ access to agency experts.

"Any sort of increased access for reporters to agency scientists and other experts would be very much in the public interest," he said.

A current senior EPA official who spoke on the condition of anonymity also said that greater public access would be beneficial for the agency, too.