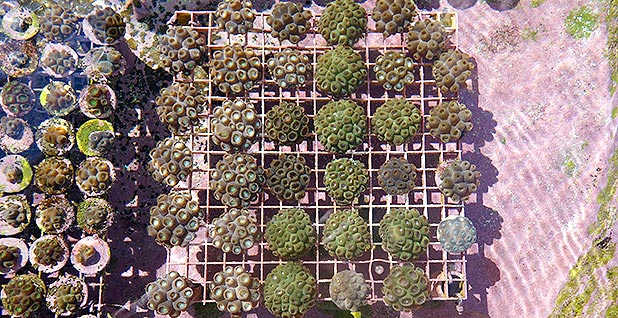 Boulder star coral grows in tanks at Mote Tropical Research Laboratory, where researchers stumbled upon a way to speed up their growth. Photo by Mark Yehle.

SUMMERLAND KEY, Fla. — Every August, two days after the full moon and two hours after sunset, the last two elkhorn coral patches in Looe Key release millions of eggs and sperm into the warm water.

Dave Vaughan is always there with a bucket, collecting the snowlike specks and transporting them to his lab on nearby Summerland Key. In the wild, one in a million might grow into adult coral every century; in Vaughan’s tub-sized tanks, the success rate balloons to 1,000 in a year.

"We do Mother Nature in a bucket," Vaughan joked during an interview at his canal-front lab, a beat-up building that sits on a busy stretch of U.S. 1, cars zooming past as they head to Key West.

Vaughan and his team at Mote Tropical Research Laboratory are in fact speeding up Mother Nature, in a bid to help coral survive climate change and the warming waters that are already decimating the world’s reefs. They have stumbled onto a series of discoveries that prompt slow-growing coral to become fast-growing, making repopulation and increased resiliency possible.

"We can [cycle through] an entire life cycle of a coral and make a selection predicting better survival," Vaughan said. "Otherwise, you would have said I got to wait 75 years and see if the next offspring are OK. And now, literally it’s our lifetime. We can do something in our lifetime."

The 63-year-old marine biologist exudes optimism. On a recent visit, he bounced from tub to tub, eyes crinkling behind his Santa Claus beard as he showed off circular plugs topped with staghorn, elkhorn, mountain star and pillar corals.

Thousands live at the lab, their numbers a testament to reproductive success no longer found in the wild.

Some grew straight from the bucket. But many are born out of tiny coral cut into tinier pieces — a process that spurs the coral to grow up to 50 times faster. When the pieces are put near each other, they merge to form an adult coral.

In Vaughan’s lab, a coral larvae can become the size of a 50-year-old coral within two years.

That accomplishment has injected hope in a field used to disappointment. Global warming is already wreaking havoc on the world’s coral reefs, threatening the thousands of species that call them home. The current global bleaching event — where warm waters prompt corals to expel the algae that feeds them — is the longest ever recorded.

The buzz over Vaughan’s lab has prompted enough donations to build him a new one: a $5 million building that will serve as both a coral bank and a hub for coral restoration.

"It’s nice to finally have something that we can do," said Chris Langdon, chairman of marine biology and ecology at the University of Miami. "That’s important."

But he tempered his enthusiasm; ensuring coral’s survival, he said, will take more than constant replenishment.

"It’s buying them time, and it’s reducing the risk that they go extinct before we find a way to solve the problem," Langdon said. "That’s absolutely critical. It’s like a first responder getting to the scene of the incident and keeping the patient alive."

Thirty years ago, Vaughan’s lab was filled with rhesus monkeys. His desk sits where the monkeys were fed, before they were sold to researchers for laboratory experiments.

It was in this "chow room" that Vaughan made his first lucky mistake.

The baby elkhorn from Vaughan’s first bucket had grown slowly; at nearly 4 years old, they were the size of a silver dollar, with branches that were still hornlike nubs. They languished in one of the tanks that lined the room, placed on the bottom in a reflection of Vaughan’s disappointment.

On that day a decade ago, Vaughan removed the corals to clean the tank. But one of the elkhorn corals got stuck, and three tiny polyps broke off.

"I looked at them and said, they’re toast. And I better watch this coral because it could get infected, it could get stunned, it’s going to be stressed," Vaughan said. "Two weeks later, I came by to look at it and that’s not what happened."

The three polyps had become a dozen. The coral had also miraculously recovered; it had grown in two weeks what earlier had taken two years, covering up the nickel-sized hole.

It’s unclear why cutting coral into tiny pieces prompts rapid growth. When Vaughan hosts children at his lab, he compares it to getting a skinned knee: To prevent infection, the skin grows rapidly to cover the cut.

Whatever the reason, micro-fragmenting has so far worked for every species Vaughan has tested — including slow-growing coral. The rates of growth vary, but the basic result is the same: new coral, fast.

It has become the backbone of an ambitious plan with the Nature Conservancy to plant 1 million fragments in the Florida Keys and the U.S. Virgin Islands over the next decade.

"This was cool when they figured this one out," said Mark Eakin, Coral Reef Watch coordinator for the National Oceanic and Atmospheric Administration. "It’s one of these things that is so simple and made so much sense that you kind of wonder why nobody figured this out before."

Overwhelmed with coral, Vaughan’s team began to place pieces closer together in the tanks than usual. They found that fragments from the same parent clone merge together to form one organism. An instant adult.

Vaughan is betting that those adults will reproduce. He has done it in the lab with one species; the size, not age, is what matters, he said.

"It’d be like having a hundred little baby chicks, all huddling together and saying, ‘We’re going to take on the world, and we’re going to start breeding," Vaughan said.

Vaughan is never far from his work. His home — wooden, on stilts, laundry flapping in the sea air — is across the canal.

He has headed the Mote Tropical Research Laboratory for more than a decade, initially aiming to build up a coral bank to preserve genetic diversity. It has so far been a low-key operation: a dozen or so employees who worked in three battered buildings or under tarp shelters, where corals grow in tanks on cinder blocks. Vaughan paddles to work every morning in a red canoe.

But the new lab, now under construction, will fit double the number of tanks. That will allow Mote to not only grow more coral but test out different strains for resiliency.

"Watch your step!" Vaughan said to visitors on a recent Tuesday, navigating his way across a wooden platform flanked by tanks that contain hot water, cold water, salt water and carbon dioxide. Inside rows of tanks, corals are subjected to varying versions of the future.

The hope is that some strains will do well out in the wild, where researchers are gluing fragments onto the dead skeletons of brain, mountainous star and great star coral. If all goes well, those fragments will fuse together and form new coral heads within a few years, replicating an ecosystem that took hundreds of years to form.

"Now we can take a coral, we can test it to see which one is maybe tolerant of future conditions, we can make 20 of them. In a few months, put 20 together, and in one year produce a 25- to 75-year-old reproductive one," Vaughan said.

Half a world away, Hawaii is hoping to save its reefs the same way.

Micro-fragmenting is "huge," said David Gulko, who is the coral nursery director for the Hawaii Division of Aquatic Resources. "That’s how we get most of the gains in coral growth."

Many of Hawaii’s coral species are unique to the area and grow extremely slowly, averaging a centimeter per year. Speeding them along is crucial to replenishing centuries-old reefs that are dying after several years of unusually warm waters. Some of Hawaii’s reefs have seen half their corals die after expelling their symbiotic algae and bleaching.

Like Vaughan, Gulko and his colleagues for years have cut up corals into tiny pieces and later fused those pieces together. But they are gluing the fragments onto concrete pyramids.

Once the coral has covered the pyramids, they transfer it into the ocean, a ready-made apartment for wildlife.

Eakin said the efforts in Hawaii and the Florida Keys are crucial amid global bleaching. But he also warned against treating micro-fragmenting as a "silver bullet."

"If we don’t deal with the rapidly rising CO2 and the temperature following that," Eakin said, "then doing this sort of work is like rearranging deck chairs on the Titanic."

The process has leveled the playing field for massive coral. Restoration efforts were once largely limited to fast-growing coral like elkhorn; now researchers can try to replant the slow-growing corals that build reefs.

But corals are dying faster than they can be replaced. And other problems are cropping up, such as "zombie reefs" that look healthy but can’t reproduce. Researchers recently found coral colonies in the Florida Keys and the Caribbean that have no eggs or sperm (Greenwire, June 22).

Then there’s the balancing act of breeding corals for certain conditions while keeping the diversity that could save reefs from future threats, such as disease. Will restored coral reefs survive?