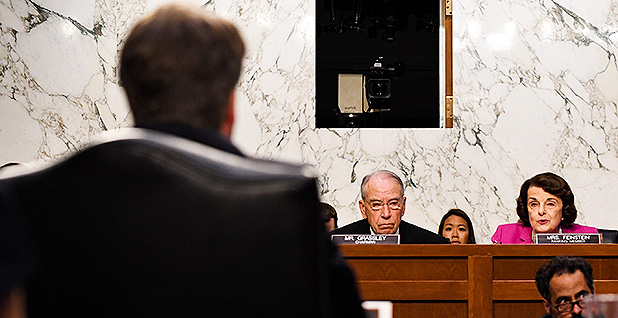 Senate Republicans are pushing ahead with a Thursday committee vote on Brett Kavanaugh, even as critics push to halt proceedings in light of sexual misconduct allegations against the Supreme Court nominee.

Judiciary Committee aides yesterday called the allegations uncorroborated and questioned the timing of the development.

"It raises a lot of questions about Democrats’ tactics and motives to bring this to the rest of the committee’s attention only now rather than during these many steps along the way," Republican staffers said in an email.

Early yesterday, lawmakers on both sides of the aisle said their options were limited because of the accuser insisting on not coming forward.

"We’ve got the latest secret allegation, but there’s nothing we can do about it," Sen. John Kennedy (R-La.) said on "Fox News Sunday," calling the confirmation process for Kavanaugh an "intergalactic freak show."

But only hours later, the accuser did come forward, further putting into question the GOP’s plans to advance Kavanaugh this week.

The woman behind the allegations came forward publicly in a Washington Post story. She is Christine Blasey Ford, a clinical psychology professor at Palo Alto University.

She says Kavanaugh forced himself on her during a high school party in the 1980s. Kavanaugh denied the incident ever occurred.

Kavanaugh, a conservative judge on the U.S. Court of Appeals for the District of Columbia Circuit, came out relatively unscathed after four days of fiery debate and questioning during his confirmation hearing earlier this month.

His nomination is now on shaky ground as Sen. Jeff Flake, a Republican from Arizona, announced in an interview that he is uncomfortable voting "yes" on the nominee. He told Politico he wanted to hear from Ford.

Sen. Lindsey Graham (R-S.C.), also on Judiciary, appeared open to the committee hearing from her but said it had to be scheduled quickly.

"If the committee is to hear from Ms. Ford it should be done immediately so the process can continue as scheduled," he said in a statement yesterday.

Aides for Judiciary Chairman Chuck Grassley (R-Iowa) said they want to see the letter from Ford that made its way to ranking member Dianne Feinstein (D-Calif.) this summer.

Ford, through her attorney, told media outlets this morning she was willing to testify.

Many Republicans have derided the new allegations as an eleventh-hour attempt by Democrats to derail the process. A chorus of Democrats have called for this week’s vote to be postponed.

"The American people deserve to know who Judge Kavanaugh is, but Republicans are trying to rush through this nomination while concealing critical parts of the nominee’s record," Sen. Dick Durbin, (D-Ill.), who is on the Judiciary panel and is a member of his party’s Senate leadership, said on Twitter. "There are far too many questions swirling around this nomination."

Senate Minority Leader Chuck Schumer (D-N.Y.) said in a statement, "Senator Grassley must postpone the vote until, at a very minimum, these serious and credible allegations are thoroughly investigated. For too long, when women have made serious allegations of abuse, they have been ignored. That cannot happen in this case."

"This was a very brave step to come forward," he said. "It is more important than ever to hit the pause button on Kavanaugh’s confirmation vote until we can fully investigate these serious and disturbing allegations. We cannot rush to move forward under this cloud."

If the Judiciary panel approves the nominee Thursday, the full Senate will likely vote on his nomination next week.