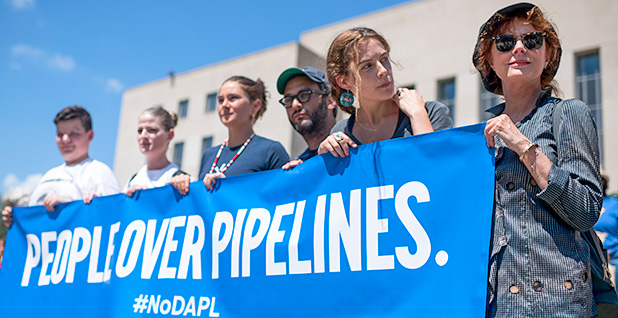 Hollywood stars Susan Sarandon (right) and Shailene Woodley (fourth from right) jump into the Dakota Access pipeline protest before the E. Barrett Prettyman U.S. Courthouse in Washington, D.C. National climate and environmental advocates are carefully monitoring more than a dozen oil and gas projects triggering grass-roots pushback throughout the Mid-Atlantic that they say are ripe for national attention. Photo courtesy of AP Images.

Emboldened by the Obama administration freezing construction on part of the Dakota Access pipeline, activists opposing oil and gas projects are now girding for new battles in the Mid-Atlantic region.

"I think the Atlantic Coast and Mountain Valley [pipelines] are cued up to be the next hot spots. They have river crossings, and there are such historic grounds of American history — literally land given by George Washington to families during the wars," Bold Alliance President Jane Kleeb declared in an interview last week. "These are the sleeping dragons."

Key to her strategy: energizing the far-reaching, diverse political base built by Vermont independent Sen. Bernie Sanders during his presidential run by tapping Our Revolution, the lawmaker’s nonprofit, where Kleeb sits on the board. The group, she said, is angling to torpedo the North-Dakota-to-Illinois pipeline and the contentious Trans-Pacific Partnership free-trade agreement.

But with President Obama one foot out the White House door, Kleeb said time is ticking to achieve her ultimate goal of pushing the government to impose a climate test on energy infrastructure and end the use of eminent domain for private gain.

"That, from our perspective," she said, "is how you stop pipeline expansion."

The national strategy has struck a nerve with the oil and gas industry. In interviews, industry executives called pipeline foes a "vocal minority" spreading "dangerous" rhetoric against fossil fuels that ignores the need for affordable natural gas from projects that meet rigorous environmental, financial and societal standards.

"Every month that Keystone XL dragged on, public support grew," said Andrew Black, president of the Association of Oil Pipe Lines. "In the time Keystone XL was being considered as an industry, we built 12 Keystone XLs."

Robin Rorick, group director of midstream and industry operations at the American Petroleum Institute, accused national environmental groups of taking advantage of the legal fight in North Dakota to advance their platform.

"I don’t think the objections are directed at pipelines, per se; I think this is a play to completely and unrealistically get the nation off of fossil fuels," he said.

"Regardless of whether or not it’s a gas pipeline, an oil pipeline, a terminal, a refinery or even roads, they want to oppose it all."

While short-term attention will remain focused on the Bakken Shale play, Kleeb said organized landowners and environmental groups are rallying to turn the Atlantic Coast and Mountain Valley pipelines into attention-grabbing battlegrounds.

But Kleeb acknowledged that natural gas pipelines are a tougher fight than those carrying crude.

And federal regulators have for years said the same politics that launched the Keystone XL pipeline into the national spotlight cannot be replicated in the gas markets.

Tony Clark, a member of the Federal Energy Regulatory Commission, last year pointed to the Natural Gas Act and an independent regulatory model at FERC for interstate gas pipelines, which he said employs a more judicial approach and relies on a record and due process to reach decisions (E&ENews PM, Nov. 10, 2015).

Unlike with Keystone XL, which required approval from the State Department to cross from Canada into the United States, Clark insisted that case law and regulatory precedents insulate gas pipeline permitting from politics. That, he said, is "the right way to handle it."

"The Atlantic Coast Pipeline is not Keystone; Bold Alliance and these other nations groups are trying to fit a square peg into a round hole," Ruby said. "Candidly, for them, this isn’t even about the Atlantic Coast pipeline. ACP is just a means to an end. They have a bigger agenda, and it’s a radical and extreme agenda" to eradicate fossil fuels from the American economy.

FERC has been targeted by national environmental protests, with meetings interrupted by members of Beyond Extreme Energy who later made visits to commissioners’ homes. And local officials in the Northeast and pipeline opponents are pushing for a comprehensive federal review of large natural gas projects cropping up across the region (Greenwire, Nov. 24, 2015).

FERC and energy analysts have said that work is ongoing at the agency under the National Environmental Policy Act, or NEPA — and that a larger, programmatic environmental review under the law isn’t required.

But Jeff Tittel, director of the New Jersey chapter of the Sierra Club, said the public often doesn’t realize the magnitude or scope of proposed natural gas pipelines that can run for hundreds of miles along the East Coast when federal reviews are narrowed on specific sections.

"The reason Dakota and Keystone were able to grab national attention was because people saw how big they are, and how much damage they’re going to do because they’re so large," Tittel said. "What’s happened on the East Coast is they’re doing it a 100-mile segment at a time, so people don’t realize until it’s too late that it’s a 1,000-mile pipeline, too, like Keystone, like Dakota."

Companies say gas is not for export

Key to Kleeb’s ability to rally opposition to pipeline projects are suspicions that the fuel is headed for export.

"If it’s a small, distributed line, those are very difficult to stop, and you almost could argue there’s no point in stopping those," Kleeb said. "It’s the ones we think are headed for the export market that I think a lot of us are interested in.

"That’s a compelling narrative to the public, saying this is actually not about American energy independence; this is about a pipeline company wanting to get their stuff to the export market," she added.

But Dominion’s Ruby noted that almost all the gas that would run through the Atlantic Coast pipeline has been secured through 20-year contracts by five public utilities that serve customers in Virginia and North Carolina. Those companies, he said, will use the gas to generate electricity, provide residential home heating and supply power for businesses.

"That is a fact — not an opinion — and it’s been demonstrated on the public record," he said. "Any claim to the contrary is nothing more than a cynical attempt to misinform the public."

A spokesman for the Mountain Valley pipeline echoed Ruby’s comments.

"Mountain Valley pipeline expressly stated in its formal application to the FERC that it did not design its facilities to transport natural gas to [a liquefied natural gas, or LNG] export terminal," said Natalie Cox. "Additionally, MVP does not intend to seek permission to export natural gas overseas as LNG from either the U.S. Department of Energy or the FERC."

The debate has put a spotlight on federal pipeline permitting and is ratcheting up pressure on Democratic vice presidential candidate Sen. Tim Kaine of Virginia to clarify his position.

While warning FERC against fast-tracking its review of the pipeline, Kaine has not said whether he’s for or against the project, saying only that federal agencies make that decision. Overall, the senator has a mixed record, voicing support for fast-tracking gas export terminals while earning environmental kudos for battling the Keystone XL oil pipeline (ClimateWire, July 25).

FERC is the lead agency for conducting environmental reviews of proposed interstate gas pipelines and considers whether there is a market need for new pipelines. FERC also has the authority under the Natural Gas Act to grant private corporations the power of eminent domain over local jurisdictions.

Carolyn Elefant, a solo lawyer who represents landowners in pipeline disputes before FERC and in court, said it’s important to look at what portion of the gas moving through the pipe is meant for local need (Greenwire, Aug. 22).

FERC, she noted, currently bases its decisions on how much of the pipeline’s capacity is under contract, as well as data on general market trends.

"In the energy sector, I think there’s a need to decide, when FERC says we find there’s a need for a project, what that means," Elefant said. "What if those contracts aren’t with a local utility but a company in Japan or a company overseas?"