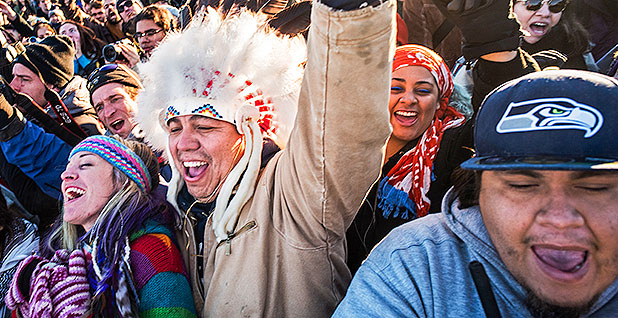 Pipeline opponents in North Dakota celebrate news that the Obama administration will not grant an easement for the Dakota Access pipeline. Photo courtesy of AP Images.

Dakota Access pipeline opponents were elated yesterday as news of the Obama administration’s refusal to grant a final permit made its way around the protesters’ camp.

In videos shared on social media, activists in North Dakota are seen cheering, singing and joining hands outside the tents and teepees many of them have lived in for months in opposition to the oil project. One tribal advocate joked on Facebook that a lot of babies will be born nine months from now.

The Standing Rock Sioux Tribe, which led the effort to stop the pipeline, was perhaps the most relieved at the news of its delay.

"The Standing Rock Sioux Tribe and all of Indian Country will be forever grateful to the Obama Administration for this historic decision," Chairman Dave Archambault II said in a statement, adding that protesters are eager to get back to their families for the winter.

The pipeline would cross within a half-mile of the tribe’s reservation, across ancestral homelands that were once promised to the Sioux in a treaty. Opposition to the project has sparked a larger battle over tribal treaty rights across the nation.

In its long-awaited decision, the Army Corps of Engineers announced it would not grant the easement needed for the pipeline to cross Lake Oahe, a dammed section of the Missouri River. Instead, the agency will undertake an in-depth environmental impact statement to consider risks and alternative routes (Energywire, Dec. 4).

That means the project is not dead, but it is significantly delayed.

"The White House’s directive today to the Corps for further delay is just the latest in a series of overt and transparent political actions by an administration which has abandoned the rule of law in favor of currying favor with a narrow and extreme political constituency," the companies said in a statement.

Opponents promise to continue their campaign against the pipeline as the environmental review process moves forward.

"We are asking our supporters to keep up the pressure, because while President Obama has granted us a victory today, that victory isn’t guaranteed in the next administration," the Indigenous Environmental Network’s Dallas Goldtooth said in a statement. "More threats are likely in the year to come, and we cannot stop until this pipeline is completely and utterly defeated, and our water and climate are safe."

The Army Corps’ announcement follows a flurry of federal activity related to the pipeline in recent days.

On Friday, Attorney General Loretta Lynch reached out to local law enforcement to urge them to de-escalate tensions with protesters. She followed the call with a video message promising federal support for community policing and peaceful protest.

Meanwhile, the Army Corps’ Omaha District commander was meeting for five hours with members of the Standing Rock Sioux Tribe and representatives from Dakota Access LLC. They reviewed the tribe’s concerns about the pipeline and discussed 30 operating terms that could reduce the risk of a pipeline spill or rupture. According to an agency memo, the meeting "did not produce any definitive mutual agreements."

How we got here

It’s been a long road to the Army Corps of Engineers’ decision yesterday to refuse to grant an easement for the Dakota Access pipeline.

The conflict began years ago, before the word "easement" was ever part of the discussion. The nearest tribal neighbor to the pipeline, the Standing Rock Sioux Tribe, has opposed its route for years. Though the tribe did not attend state regulators’ meetings on the project, it made its grievances known to the project developer and the Army Corps.

The tribe’s opposition grew this year as the corps granted Clean Water Act approvals for the pipeline to cross various rivers, wetlands and lakes along its route. That included Lake Oahe, a culturally significant section of the Missouri River.

The route would also cross ancestral homelands, part of Sioux territory under an 1800s treaty, plus several areas that could contain tribal artifacts or burial grounds.

Represented by Earthjustice, the tribe sued the Army Corps in July, arguing that the nationwide permitting system used to greenlight the water crossings was flawed and did not adequately incorporate tribal input.

The lawsuit galvanized tribes and environmentalists, who came from across the country to join the Sioux people in their opposition to the pipeline. The situation transformed from a battle against a single pipeline to a movement for greater tribal consultation and respect for treaty rights.

The Obama administration took notice, intervening in September to block pipeline work across the lake by withholding a real estate easement — just moments after a federal judge refused to freeze construction.

Since then, it’s been a tense game of wait-and-see. As construction continued on other parts of the line in recent months, local law enforcement called for backup from several neighboring states to control protest activities.

Tensions between law enforcement and protesters have turned into violence on several occasions, and all sides have implored the Obama administration to issue a final decision on the easement.

By Saturday and yesterday, tensions on the ground began to lift as law enforcement officers struck a deal with a group of veterans opposed to the pipeline, agreeing to pull back from their position near the protesters’ camp as long as protesters agreed not to advance toward the pipeline route. Officers had just finished their relocation when news of the Army Corps’ announcement hit.

The easement decision is a milestone not just for tribes seeking greater control over development near their lands but also for the Army Corps, which has consistently defended its prior approvals of Dakota Access’ water crossings.

Much of the disagreement over the agency’s tribal consultation process has revolved around its practice of focusing on impacts only in the immediate surrounding area of a water crossing, rather than impacts down the length of a proposed pipeline.

A lawyer for the Standing Rock Sioux told a federal court earlier this year that the tribe only had the chance to weigh in on "a hole in the ground," not the pipeline itself (Energywire, Oct. 6).

But that litigation is ongoing, and the Army Corps is still backing its previous actions, including an environmental assessment that found no significant impact from water crossings.

In a detailed memo yesterday, Assistant Secretary of the Army for Civil Works Jo-Ellen Darcy, who oversees the Army Corps, wrote that the agency is not changing its position that it has followed relevant laws throughout the review process.

"I want to be clear that this decision does not alter the Army’s position that the Corps’ prior reviews and actions have comported with legal requirements," she said. "Rather, my decision acknowledges and addresses that a more robust analysis of alternatives can be done and should be done, under these circumstances, before an easement is granted for the Dakota Access Pipeline to cross the Missouri River on Corps land."

Darcy cited the White House Council on Environmental Quality’s guidance that agencies "should heighten agency attention to alternatives" in some cases "where environmental effects on tribal resources are at stake."

"This more [heightened] analysis, in my judgment, is appropriate in the circumstances present here," she wrote, directing the agency to do an environmental impact statement that includes "more rigorous exploration and evaluation of reasonable siting alternatives, and greater public and tribal participation and comments."

The review will include another look at an alternative route once proposed near Bismarck, as well as further discussion of oil spill risks and the impacts to tribal water, fishing and hunting rights.

Supporters of the pipeline project railed at the Obama administration for yesterday’s decision, calling it "purely political."

"Blocking the final portion of construction of the Dakota Access Pipeline after it is 93 percent complete and fully reviewed is a short-sighted, gutless, and irresponsible decision," Terry O’Sullivan, head of the Laborers’ International Union of North America, said in a statement.

According to O’Sullivan, more than 4,500 members of building-related unions have worked on Dakota Access.

"The skilled tradesmen from many communities along the pipeline’s route already preparing for the coming economic boon that will accompany the construction phase of the project were dealt a serious blow by this decision," Bill Gerhard, president of the Iowa State Building & Construction Trades Council, said in a statement.

Leaders of many labor and industry groups vowed to fight for the pipeline under Trump, who has signaled support for the project.

But a reversal of the Army Corps’ decision would have to be accompanied by a legal rationale that would stand up in court, as tribes and environmentalists have promised to challenge any such decision.

For now, the ball is in the Army Corps’ court.

The agency will begin preparing its environmental impact statement, including extensive public scoping and comment, as well as close coordination with the Standing Rock Sioux Tribe. That process is expected to take months.

ClearView Energy Partners analyst Christi Tezak noted that the next administration could swiftly grant the easement, or a federal court could rule in Dakota Access’ favor.

"Either way, the outgoing Obama Administration has taken an action that appears to preclude Dakota Access starting work before President Obama leaves office on January 20, and constructs a hurdle to approving it that merely leaving the easement outstanding did not present," she wrote.

Lawyers for the company have said in court filings that if the pipeline does not go into service as scheduled in January 2017 — as it now assuredly cannot — the company could lose customer contracts and millions of dollars. A year of delays and related losses, including capital expenses, loan renewal fees, lost revenue and penalty payments, would cost the company $1.4 billion, the lawyers said (Energywire, Sept. 15).

The delay could also complicate financing for the pipeline. Energy Transfer cannot access the final $1.4 billion out of a $2.5 billion loan until it receives the easement from the Army Corps, Chief Financial Officer Tom Long said during a Nov. 10 conference call with analysts.

Peace on the ground

Back on the ground in North Dakota, protesters are still celebrating their victory today.

In a statement, Attorney General Lynch noted that the Justice Department "will continue to monitor the situation in North Dakota in the days ahead and we stand ready to provide resources to help all those who can play a constructive role in easing tensions."

"The safety of everyone in the area — law enforcement officers, residents and protesters alike — continues to be our foremost concern," she said.

Technically, today marks the deadline for protesters to comply with state and federal orders to vacate their main camp. However, both the Army Corps and local law enforcement have said they will not forcibly remove anyone.

Morton County Sheriff Kyle Kirchmeier, who has led the law enforcement response to protests, said in a statement yesterday that authorities would simply continue to "enforce the law."

"I have stated from the beginning that the easement is a federal decision and local law enforcement does not have an opinion on it," he said. "Our role is to enforce the law and that is what we will continue to do."