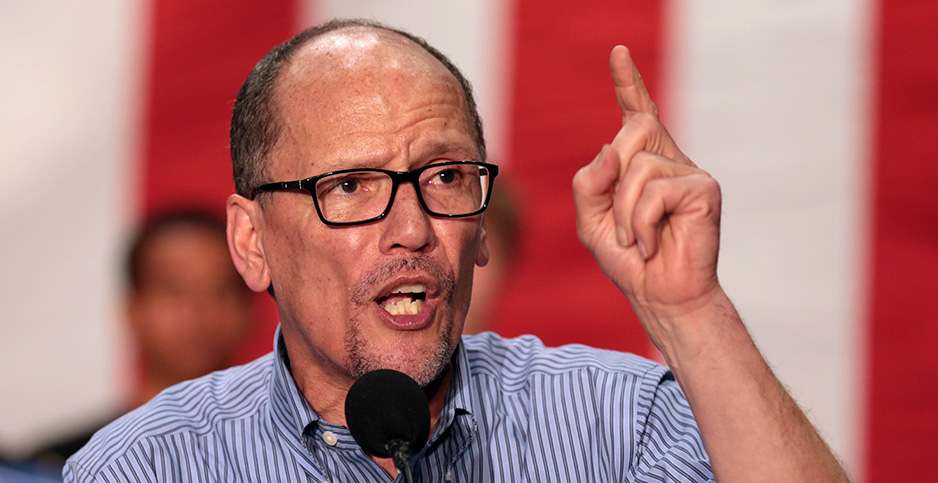 The Democratic National Committee has turned down Jay Inslee’s request to host a 2020 Democratic primary debate focused on climate change, and many green groups, as well as other core Democratic constituencies, are angered by the decision and urging the party to reconsider.

Inslee, Washington’s governor and a 2020 presidential hopeful, announced yesterday that the DNC had called his staff to say it wouldn’t hold a climate debate. Inslee’s campaign is focused on that issue.

The DNC also said that if Inslee participates in a non-sanctioned debate, he won’t be allowed at future party debates, his campaign said.

"This is deeply disappointing. The DNC is silencing the voices of Democratic activists, many of our progressive partner organizations, and nearly half of the Democratic presidential field, who want to debate the existential crisis of our time," Inslee said in the statement.

"Democratic voters say that climate change is their top issue; the Democratic National Committee must listen to the grassroots of the party," he said.

Environmental activists took to social media yesterday evening to push back against the DNC’s decision.

"We hope that all candidates, especially those who joined us in calling for a #ClimateDebate, will speak out against this disastrous decision and demand @DNC reconsider," the Sunrise Movement tweeted last night.

Candidates including Sens. Bernie Sanders (I-Vt.), Elizabeth Warren (D-Mass.) and Kirsten Gillibrand (D-N.Y.); former Housing and Urban Development Secretary Julián Castro; and former Rep. John Delaney (D-Md.) have all in the past urged DNC to have a climate-focused debate.

The Sierra Club tweeted: "This is a deeply disappointing decision. Democratic candidates are offering strong, bold climate plans that contrast sharply with Trump’s inaction & the public deserves to hear them discussed in depth. We urge @DNC to reconsider."

The Women’s March organization, which mobilized massive women’s rights rallies nationwide after President Trump’s inauguration, chimed in with its disappointment.

"We are one of many organizations that called on the @DNC to hold a #ClimateDebate," the group tweeted. "The decision against a climate debate is a decision to de-prioritize THE urgent issue that will impact generations to come."

Xochitl Hinojosa, a spokeswoman for the DNC, defended the decision last night.

"Our goal is to provide a platform for candidates to have a vigorous discussion on ideas and solutions on the many issues that voters care about, including the economy, climate change, and health care," she said in a statement, noting that the campaigns in 2016 should have paid more attention to climate change at the time.

"While climate change is at the top of our list, the DNC will not be holding entire debates on a single issue area because we want to make sure voters have the ability to hear from candidates on dozens of issues of importance to American voters," she continued.

The prohibition on nonsanctioned debates is a standard practice for party committees; candidates, however, are allowed to participate in forums, even ones with multiple candidates.

Inslee hasn’t polled above 1% in any major survey, but he has used his presence in the crowded Democratic field, in part, to push the climate debate idea since April. It’s part of his overall effort to boost the position of climate in the campaign and challenge his rivals to outdo him on what he has made, far and away, his No. 1 priority.

Inslee pushed the issue further this week with a letter directly to DNC Chairman Tom Perez asking for a climate debate.

Democrats have not focused solely on climate in a previous election year’s debate, but there is precedent for debates to center on specific issues. In all, the party is planning 12 officially sanctioned primary debates through April 2020.

Climate has already taken an unusually high profile in the Democratic race, with nearly eight months to go until the Iowa caucuses, the first contest of the primary season. Many candidates have fully or partly endorsed the Green New Deal, and others have laid out climate policy plans unprecedented in their detail and ambition, with more on the way.

Meanwhile, polling has shown an increase in concern about climate change among the public, including a Morning Consult/Politico poll last month that found that 63% of voters think it’s important for Congress to pass legislation to confront climate change.

Environmental activist groups CREDO Action, the Sunrise Movement, Friends of the Earth Action, Public Citizen and 350 Action have joined the call, while Democratic Sens. Brian Schatz of Hawaii, Sheldon Whitehouse of Rhode Island and Martin Heinrich of New Mexico have asked NBC News and MSNBC to ask about climate change later this month when they host the first debate of the cycle.