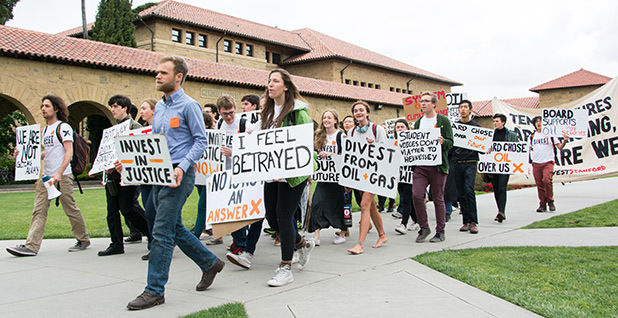 Stanford University has announced it will retain its holdings in fossil fuel companies, dismaying student activists and one of its most prolific donors.

The move sparked protests on campus yesterday and an angry statement from billionaire climate activist Tom Steyer, a Stanford alumnus who serves on the school’s board of trustees and donates heavily to the institution.

"I strongly disagree with Stanford’s decision not to divest from fossil fuels," Steyer said. "Climate change is truly the challenge of our generation, which is why I have long publicly supported divestment from fossil fuels and continue to do so."

University trustees earlier this week made a detailed argument for maintaining the institution’s holdings, weighing the benefits that oil and gas provide worldwide against the goal of reducing greenhouse gas emissions. The decision comes nearly two years after the university announced it would divest from direct investments in coal-mining companies (ClimateWire, May 7, 2014).

The decision is the latest in a series of rejections by prestigious, deep-pocketed universities of climate change advocates’ demands that the institutions sell their coal, oil and natural gas investments.

Stanford’s board, which oversees a roughly $22 billion endowment, asked an advisory panel of staff, alumni and students to consider whether fossil fuel companies are "inflicting social injury in a manner that warrants consideration of divestment."

The panel announced Monday that fossil fuel companies — with the exception of oil sands extraction companies — were not inflicting pernicious enough damage to call for divestment.

No ‘credible case’ for divestment

In their explanation for the decision, trustees said fossil fuels are embedded in "the daily lives of billions of people in both developed and emerging economies." They also cited some oil and gas producers’ work to develop alternative energy sources as a reason against divestment.

"Divestment is rare, and consideration of it is reserved for specific cases in which, among other things, the demonstrated social injury by a company substantially outweighs any social benefits it provides," the board said. "[G]iven how integral oil and gas are to the global economy, the trustees do not believe that a credible case can be made for divesting from the fossil fuel industry until there are competitive and readily available alternatives."

Stanford is working to cut its carbon footprint, raising solar panels and constructing a heat recovery system to save energy, and faculty members are researching alternative energy and methods to use to adapt to climate change threats, the board said in a statement.

Stanford has no direct investment in oil sands businesses. The extent of its holdings in other fossil fuel companies is unclear.

The university has the fifth-largest endowment among U.S. schools, according to National Association of College and University Business Officers data. It provides a greater portion of the school’s annual budget than student tuition, the trustees said.

Investment income from the endowment provided 21 percent of Stanford’s $5.5 billion budget in 2015-16, while tuition provided 16 percent. The school’s $26 billion primary fund, which is largely made up of its endowment, earned an average annual return of 8.7 percent from 2005-15.

"Stanford’s decision is not a big surprise. It’s consistent with how most of the large endowments have landed on this," said Chris Davis, director of the investor program at Ceres, a sustainable investment advocacy group.

"Harvard has been through this, Yale; it’s ongoing at a lot of places. A number of smaller institutions have decided to divest. Most of the larger endowments have not, just like most of the large pension funds," he said.

Davis noted that the university hadn’t indicated if it would try to affect decisions within the companies it owns — a tactic called shareholder engagement.

"They haven’t taken a position yet on whether they’re going to be activist shareholders or not," he said. "I think they’re in the process of working through these issues on how they’re going to address climate risk."

Steyer, meanwhile, praised his alma mater’s decisionmaking process as "thorough and exhaustive" even as he blasted the decision.

"I remain confident that Stanford will continue to push to accelerate our transition to a clean energy economy," he said.

Steyer did not respond to a question about whether he would reduce his contributions to Stanford as a result of the decision. Steyer and his wife, Kat Taylor, are longtime supporters of the school.

They donated $40 million in 2009 to establish the TomKat Center for Sustainable Energy and another $7 million in 2010 for the Steyer-Taylor Center for Energy Policy and Finance, established to "ensure that investments are made in an economically and environmentally reasonable way across the entire energy system: in renewable sources, fossil fuels and nuclear power, and critically, in energy-efficiency technologies."

Stanford students said they were angered by the decision.

"Their voting ‘no’ on fossil fuel divestment really tells us that what matters most to us, the students, faculty and alumni, doesn’t matter," said Hanna Payne, a freshman majoring in earth systems and environmental science.

Students are campaigning to deprive Stanford of donations, a significant funding source. The school received $800 million last year from 83,000 individual donors. Out of 7,000 undergraduates, 353 have signed a pledge to withhold donations until Stanford divests from fossil fuels.

According to 350.org, the advocacy group spearheading the campaign, more than 500 institutions collectively worth $3.4 trillion have pledged to divest. That, however, is not the face value of their fossil fuel holdings.

The Rockefeller Brothers Fund, built on the riches of the Rockefeller oil empire, may be the highest-profile group committed to divestment.

But since fossil fuel divestment campaigns began to take root roughly two years ago, college and university administrators have largely dismissed students’ efforts. School presidents have said endowments shouldn’t be political tools, and chief investment officers have maintained that removing the fossil energy sector from their portfolio would be financially risky.

In recent months, though, the campaign has become more intense and dramatic, punctuated by sit-ins and student arrests.

"It seems like a lot of things are happening at once," said Daniela Lapidous, a senior studying sociology at Columbia University, which has not committed to any form of fossil fuel divestment.

She and her peers didn’t expect to stay for a week in a locked-down building. They had brought in enough food for a few days, and school officials allowed them deliveries from outside. New York University students overlapped with their uptown counterparts’ demonstration, occupying a library elevator for two days and garnering support from Democratic presidential candidate Sen. Bernie Sanders of Vermont.

"Let us stand in solidarity with the students at Columbia and NYU for demanding their schools divest from fossil fuels. #KeepItInTheGround," the senator tweeted.

Both schools threatened suspension. "I’m very sure that schools’ administrators connect with each other," Lapidous said.

Dozens of colleges have divested partially, she said, but few have committed fully. In March, 30 Columbia faculty members, including economist and Earth Institute Director Jeffrey Sachs, issued a statement urging the university to sell any coal stocks in its $9 billion endowment and "proactively" shift toward non-fossil-fuel sources.

Meanwhile, in Poughkeepsie, N.Y., a sit-in outside the president’s office at Vassar College entered its fourth day today. It has attracted at least 100 students, according to an on-campus group. Lily Berman, a freshman consider philosophy, said they plan to stay until tomorrow.

"We wanted to be part of this national momentum," Berman said. Some Vassar trustees have said they wouldn’t divest under any political circumstance, she said.

"Divestment is not to effect economic change," Berman said, "but it’s a political message."

Earlier this month at the University of Massachusetts, Amherst, authorities arrested more than 30 student protesters and police in Boston escorted four Harvard University students out of the Federal Reserve Bank in Boston, where Harvard Management Co. has its office.

Ben Franta, a Harvard doctoral candidate in physics, was one of those arrested. He and his peers were charged with trespassing, held in jail for a day and arraigned last week, and have a court date next week.

"We’ll see what happens," Franta said. "For us, it was a little bit scary."