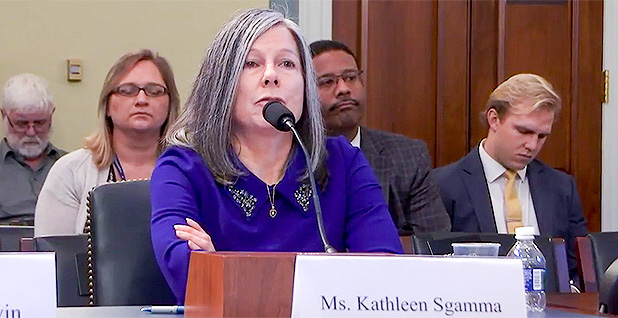 A volunteer energy adviser to the Interior Department cautioned today against some of the more dramatic reorganization proposals floated by Interior Secretary Ryan Zinke.

While emphatically agreeing that Interior could usefully relocate some operations out West, Western Energy Alliance President Kathleen Sgamma identified potential problems in some concepts that Zinke has aired for the Bureau of Land Management and other agencies.

"We are skeptical of efforts to change BLM from a mostly state-based organization to one based on ecosystems or watersheds," Sgamma advised a House panel in written testimony, adding that "the best structure for the BLM is the current one, based largely on states."

An alternate member of Interior’s advisory Royalty Policy Committee, Sgamma said she is also "concerned about potential plans for a rotating command structure, similar to a unified command structure in the military," noting that Interior’s bureaus have different missions.

The committee provides advise on policies and regulations related to revenue collection from energy and mineral development on public lands.

"Reorganization can just lead to more bureaucracy and not necessarily greater efficiency," Sgamma said in testimony to the House Natural Resources Subcommittee on Oversight and Investigations (E&E Daily, Dec. 4).

Based in Denver, which some posit as a future bureau headquarters site, the Western Energy Alliance represents more than 400 companies involved in the oil and natural gas industry. Generally speaking, many are allies of Zinke and the Trump administration.

The still-mysterious Interior Department reorganization plan, though, has got people from every ideological corner scrambling to figure out crucial details.

"We, the subcommittee with jurisdiction, have not been allowed to see the plan," Rep. Donald McEachin (D-Va.) said today, adding that "this plan has received no input from stakeholders or Congress."

The four witnesses at today’s hourlong hearing did not include anyone from the Interior Department, and Zinke has not yet made public his formal reorganization proposal. Instead, lawmakers and career Interior staffers alike must sift through publicly available clues (Greenwire, Sept. 26).

In April, speaking about reorganization, Zinke said he would "approach this job like I approached every command I was tasked with in the Navy: Empower the front lines; cut the waste, fraud and abuse; hold people accountable; and do more with less."

The management concepts under consideration include dividing Interior’s responsibilities among 13 "joint management agencies" based on regional watersheds, rotating leaders through offices and shrinking D.C. headquarters, according to news accounts relied upon by witnesses today.

McEachin added that a plan has apparently been submitted to the Office of Management and Budget, but said House Republicans "decided not to require that it be released for this hearing."

In July, Zinke further suggested that BLM, the Fish and Wildlife Service and the Bureau of Reclamation could all eventually relocate their headquarters operations to Denver, according to employee notes previously obtained by E&E News (Greenwire, Aug. 15).

A number of Westerners support the relocation idea, though not necessarily to Denver, noting that the vast majority of Interior-managed lands are located in Western states.

"The root of the problem is that decisionmaking authority is based not out in the field, but scattered in cubicles thousands of miles away in Washington, D.C.," said Rep. Bruce Westerman (R-Ark.), the chairman of the Oversight panel.

McEachin, the subcommittee’s senior Democrat, countered that 91 percent of FWS employees and 96 percent of BLM workers are already based outside of D.C. Overall, 90 percent of Interior’s employees are located away from the D.C. headquarters.

"Reorganization itself is not a bad idea," said Denis Galvin, a former National Park Service deputy director and now an adviser to the Coalition to Protect America’s National Parks. "[But] it needs to promote effectiveness and efficiency. It needs to have public vetting and support."

The Interior Department can use its existing powers to delegate certain decisionmaking or to plan for relocating bureaus’ headquarters, but lawmakers also have a say. A federal law dating to 1947 requires that "all offices attached to the seat of government shall be exercised in the District of Columbia, and not elsewhere," unless Congress authorizes something different.

In May, Rep. Scott Tipton (R-Colo.) introduced H.R. 2287, which would direct Interior to prepare a strategy relocating the BLM headquarters to a Western state. The strategy would have to include a timeline and a description of the factors to be considered in choosing a location.

The bill currently has 17 House co-sponsors, including two Western Democrats.