Advocates want communities to have a say on funding package 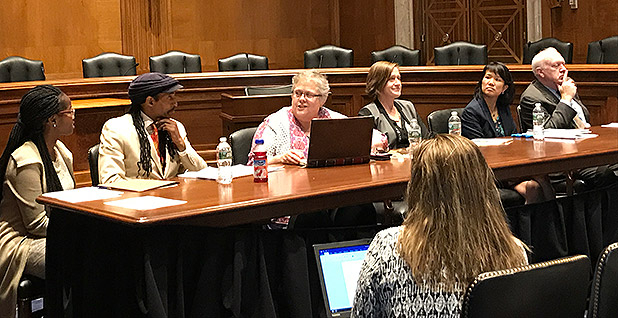 Transportation Secretary Elaine Chao promised the administration’s vision for rebuilding the country’s infrastructure, from roads to veterans’ hospitals, could land on Capitol Hill in weeks and would include $200 billion in federal funds directed at triggering $1 trillion in overall investment. She has called extensive environmental reviews, not the lack of cash, the main barrier to infrastructure development, and she vowed to reduce regulatory burdens.

Environmental advocates pressed an alternate view during a briefing yesterday on the Hill. Stephanie Gidigbi, who was moderating the event on behalf of the Natural Resources Defense Council, said she hoped that since Congress, not the Trump administration, would ultimately be crafting the bill, lawmakers would take environmental justice concerns more into account.

"When we hear about infrastructure, we hear a lot about the industry, and we wanted to make sure community was part of the dialogue," she said. "Communities have clear plans; what they lack is the dollars."

She called on lawmakers to make federal spending as flexible as possible to give communities more leeway over infrastructure upgrades, touting the popular Transportation Investment Generating Economic Recovery, or TIGER, grants given out by the Transportation Department as a model.

Sen. Dan Sullivan (R-Alaska) will soon introduce a bill to reform the NEPA review process, which he describes as unnecessarily delaying projects like airport terminals and roads (E&E Daily, April 5).

The administration is also weighing how to boost public-private partnerships to finance new construction, which could take the form of toll roads, for example.

Laura Sullivan, an engineering professor at Kettering University who serves on the Flint Water Inter-Agency Coordinating Committee, said that option could be insufficient to rebuild infrastructure in low-income communities. She described how residents around Flint, Mich., are weighing a public-private partnership to build a parallel water distribution system free of lead and bacteria with fees that only part of the town would be able to afford.

She had brought a rusted portion of a pipe from Flint to show congressional staffers and described getting hospitalized for a week after drinking from the city’s water supply.

Mae Wu, a senior attorney at NRDC, called available grants for upgrading water infrastructure "woefully underfunded" and pointed out that EPA had estimated it would cost $384 billion over the next 20 years to upgrade pipes, storage tanks and treatment plants, but the Clean Water State Revolving Fund only has $2.3 billion.

EPA Administrator Scott Pruitt has vowed to make sure the fund has cash.