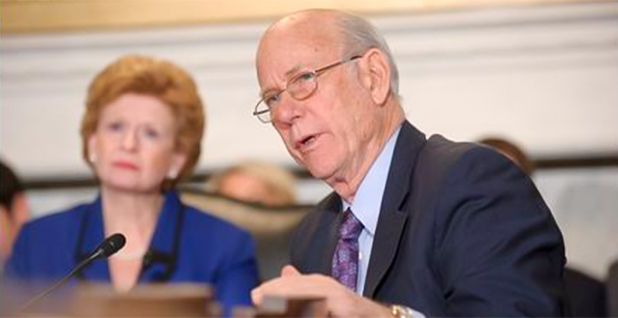 The Senate Agriculture Committee will take up its version of the 2018 farm bill Wednesday, setting the stage for conflict with a more partisan measure in the House.

If it passes with a strong vote in committee, Roberts said last week, he’s been assured that Majority Leader Mitch McConnell (R-Ky.) and Minority Leader Chuck Schumer (D-N.Y.) will move it to the floor quickly — possibly within a few days.

The proposal received mixed reviews Friday. The National Sustainable Agriculture Coalition, which advocates for conservation programs, praised the bipartisan nature of the bill and said it "stands in stark contrast" to the House counterpart — but the coalition also criticized lawmakers for cutting some conservation programs in order to fund others.

The draft would spare the Conservation Stewardship Program — the biggest conservation program in terms of acreage — from the elimination envisioned by the House Agriculture Committee. But it would trim funding from CSP and the Environmental Quality Incentives Program and put the money into other conservation programs.

That’s a bad idea, the National Sustainable Agriculture Coalition said, because it could open the way to further cuts in the future.

The CSP and EQIP are also in great demand, the NSAC said, with demand sometimes doubling the available funding in recent years.

The Environmental Working Group also found aspects to both praise and criticize.

The American Farm Bureau Federation said the Senate measure’s release is a crucial step toward finishing a farm bill while farmers and ranchers face an "economic storm," including low prices and uncertain trade relationships.

The National Farmers Union said the bill provides several improvements over the House version. The House bill, having failed on the floor in May, may be reconsidered around June 22, House leaders have said.

Supporters of agricultural research praised the legislation for providing permanent funding to some such programs and for reducing fund-matching requirements in some cases. But overall, the government doesn’t spent on agriculture research, said Thomas Grumbly, president of the Supporters of Agricultural Research Foundation.

While Roberts and Stabenow included pieces of many "marker" bills introduced by members of the committee — including a measure by Majority Leader McConnell to remove industrial hemp from the federal controlled substances list — the markup offers chances for others.

Sen. Chuck Grassley (R-Iowa) told reporters this week he’ll be looking for ways to more carefully target farm program payments to people who own and operate farms, rather than off-farm relatives, for instance.

And Sen. John Thune (R-S.D.) has called for expansion of protections for native sod through the "sodsaver" program that limits crop insurance on native grasslands in several "prairie pothole" states.