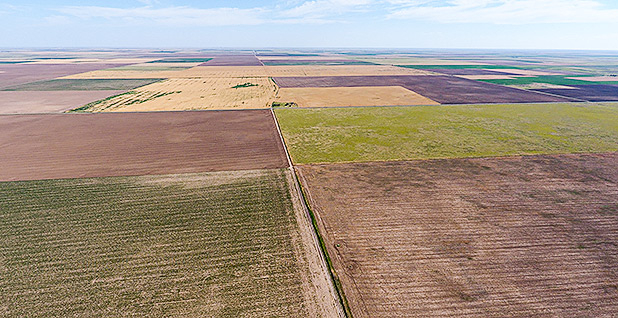 The Wind Catcher Energy Connection project is designed to include a wind farm and an "extra-high-voltage power line" in Oklahoma, according to American Electric Power Co. Inc. A drone captured this past view of the Wind Catcher facility site. Wind Catcher

American Electric Power Co. Inc. generated much applause over the summer when it unveiled a $4.5 billion plan to invest in wind power centered in Oklahoma.

But the regulatory reaction to the project — known as the Wind Catcher Energy Connection — has been far short of a standing ovation.

Dockets in Arkansas, Oklahoma and Texas are peppered with concerns over everything from the selection process to cost estimates. Louisiana is also reviewing the plan, though regulators eased the burden a bit in that state. The Oklahoma attorney general’s office has delivered withering criticism of the plan, fighting unsuccessfully so far to have a preapproval request dismissed.

"It’s not surprising that there’s opposition" from some parties, said Paul Patterson, an analyst with Glenrock Associates LLC. "It’s a big, large, complicated project, and there are a lot of things that have to fall into place."

AEP’s Wind Catcher proposal envisions the purchase of a 2,000-megawatt wind farm that Invenergy LLC is working to build in Oklahoma. The proposal also includes the construction of a 765-kilovolt power line that would run about 350 miles within Oklahoma. The company is reaching out to states to secure approval for cost recovery once the project is in service.

Wind Catcher would send power to customers of two AEP entities — Public Service Co. of Oklahoma (PSO) and Southwestern Electric Power Co. (SWEPCO). AEP has said the plan is designed to save customers more than $7 billion over 25 years, net of cost.

To Patterson, there should be room for a possible settlement or compromise in the proceedings. A potential for savings, he said, usually "gets people’s attention."

In July, AEP said SWEPCO would own 70 percent of the project and roughly 1,400 MW of wind, while PSO would have 30 percent and about 600 MW of wind (Energywire, July 27). PSO serves chunks of Oklahoma, and SWEPCO operates in portions of Arkansas, Louisiana and Texas.

Several environmental groups were pleased to see the wind proposal earlier this year, especially as discussions simmer about changes in the U.S. energy mix. The goal is to have Wind Catcher ready to deliver power to customers in about three years. It’s expected to be one of the biggest single-site wind projects in the United States.

Stan Whiteford, a PSO spokesman, said the project would provide the lowest-cost energy for PSO on its system. It also would help replace a coal-fueled generating unit that’s expected to close in less than a decade, he said.

Positives for SWEPCO from Wind Catcher, according to that company, would be more use of a resource that lacks a fuel cost as well as cost-effective delivery of power. Wind Catcher is also being positioned to take advantage of the federal production tax credit.

Testimony filed over the Wind Catcher project shows some of the emerging flashpoints, including at the Oklahoma Corporation Commission (OCC).

"The commission should not grant PSO’s request because PSO has not shown that acquiring 600 MW of additional wind is a reasonable procurement strategy and has not justified a waiver from competitive bidding requirements," said Frank Mossburg, a witness testifying on behalf of the OCC staff.

John Athas, a consultant testifying on behalf of the Arkansas Public Service Commission’s general staff, said, "SWEPCO has not demonstrated that the Wind Catcher Project is among the least cost alternatives available" to add over 1,300 MW of wind capacity to the system.

A docket in Texas includes testimony from David Smithson, an engineering specialist with the Public Utility Commission of Texas. He registered concerns about reliability and cost.

"I recommend that the Commission deny the Application, based on the risk it poses to Texas retail ratepayers," he said.

Yet the states also laid out options if commissioners are looking to go forward with the project.

If Texas regulators approve the application, Smithson said they could require SWEPCO to guarantee certain revenue requirement savings and possibly cap the share in Texas of capital costs. In Arkansas, Athas suggested SWEPCO provide analyses and testimony addressing its justification for the plan. While calling for more information, he said Wind Catcher could be a reasonable option.

The testimony from Mossburg in Oklahoma said more analysis could look at the reasonableness of the project. He said the OCC, if it believes the wind acquisition is reasonable, should have it compete against market alternatives and consider certain risk protections for ratepayers.

Whiteford of PSO said his company is reviewing comments and preparing rebuttal testimony slated to be filed in Oklahoma this month. AEP is hoping for state approvals generally by the end of spring 2018, he said. That could allow the Wind Catcher facility and power line to be in place by the end of 2020.

A route proposal may be finalized by the end of January 2018, Whiteford said. The spokesman said PSO is looking forward to addressing questions in Oklahoma.

"We anticipate having discussions beyond just the filing of testimony," Whiteford said.

Todd Bohrmann, who works in the office, said in testimony that PSO failed on a number of fronts, including a lack of a "compelling argument" for why it deserves a "good cause" exception after it didn’t follow certain standards when seeking preapproval. Bohrmann also questioned the need and cost-effectiveness of the wind project.

PSO couldn’t demonstrate that Wind Catcher is "in the public interest" or that it adequately addresses certain issues, including the effect on network reliability and the economic impact on ratepayers, according to Bohrmann.

In Louisiana, the situation is a little different. A move by the Louisiana Public Service Commission (LPSC) gave SWEPCO an exception to a competitive solicitation process.

"This only eased the requirement that they put the project out for bid, but did not ease the requirement for SWEPCO to show the need for the project" and that it sufficiently tested the market for the lowest reasonable cost resource, Colby Cook, an LPSC spokesman, said via email.

Staff members are "closely following the procedural schedules and filings" at commissions in Arkansas, Oklahoma and Texas, Cook said. LPSC staff testimony is due next month, he said.

In Oklahoma, the site of the wind farm and power line proposal, there are many considerations.

Take Clean Line Energy Partners LLC, which is involved in the Plains and Eastern project that would take wind energy from the Oklahoma Panhandle to the U.S. Southeast. In testimony, a consultant speaking on behalf of Plains and Eastern said that project could serve as a link for Wind Catcher.

It’s not clear that such an idea would gain much traction with AEP or others, but the Plains and Eastern suggestion lingers as that project looks for customers (Energywire, Dec. 13).

At the same time, potential opposition among residents to the power line piece of Wind Catcher is stirring, as the Associated Press noted recently.

Moves by state commissions could give Wind Catcher momentum or slow its progress in the months ahead. Patterson noted that Xcel Energy Inc. was able to reach a potential settlement in New Mexico on a plan to increase wind energy generation in its region.

In a news release this week, Xcel said the settlement with key groups includes an investment cap tied to construction cost estimates of wind farms; a minimum annual net capacity factor for wind turbines; and a guarantee that customers will be credited 100 percent of the federal production tax credit.

At the same time, Xcel said parties agreed it could use certain provisions to help match the beginning of cost recovery in New Mexico retail rates with in-service dates for wind installations.

The settlement will still be reviewed by New Mexico regulators, and Xcel said work remained as it sought a settlement in Texas. Regardless, the idea shows a possible route for Wind Catcher as it faces questions and concerns.

The Southwest Power Pool, a regional transmission organization that handles a middle swath of the United States, will also play a role as it studies the potential impact of Wind Catcher on its system.

AEP has "a lot of t’s to cross and i’s to dot to get this thing over the goal line," Patterson said.

But he added later, "One should also take into account that these projects have the potential of saving a substantial amount of money for customers."