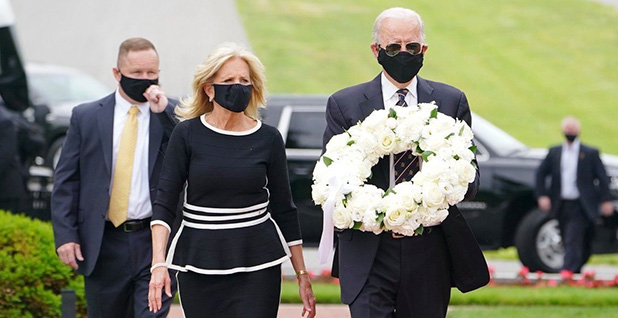 The endorsement from the board of the 55-union, 12.5-million-worker AFL-CIO came as little surprise, given its long-standing support of Democrats and Biden’s efforts to appeal to unions.

"We know Joe, and Joe knows us. He’s been to our union halls. He’s marched on our picket lines. He’s a champion in every sense of the word," AFL-CIO President Richard Trumka said in a video announcing the endorsement.

"As a senator and later as vice president, Joe used his voice and his vote to advance the cause of working people. He fought for living wages, health care, retirement security and civil rights. He did everything he could to create a fairer process for forming and joining a union," said Trumka, a former coal miner and president of the United Mine Workers.

President Trump campaigned in 2016 on being an ally to workers, Trumka said, but "he slashed rules designed to protect us on the job. He cut workplace health and safety inspectors to their lowest level in history. He took overtime pay away from millions of workers. At every turn, he’s actively undermined collective bargaining and our freedom to form a union."

AFL-CIO is also pledging with its endorsement to go all out to get Biden elected, with activities that in the past have included high-dollar advertising, fundraising, organizing and canvassing.

AFL-CIO and some of its constituent unions have been skeptical recently of some of the progressive climate change and environmental policies Democrats have embraced, like the Green New Deal.

The federation’s Energy Committee, led by the heads of the United Mine Workers and the electrical workers union, called the proposal "not achievable or realistic" in a letter last year.

"We will not stand by and allow threats to our members’ jobs and their families’ standard of living go unanswered," the committee said.

Biden hasn’t endorsed the Green New Deal but has called it a "critical framework" and backed some proposals included in it, such as banning fossil fuel extraction on federal land as well as offshore. He wants the United States to reach net-zero greenhouse gas emissions by 2050.

"Energy policies made today will reverberate for decades, and it’s paramount that we have a candidate for president who supports IBEW jobs and IBEW values," Lonnie Stephenson, president of the electrical workers union, said in backing Biden in February (Greenwire, Feb. 5).

"He backs an all-of-the-above approach to slashing carbon emissions. He also has proposed the largest-ever investment in clean-energy technology, as well as an aggressive clean-power infrastructure plan that will make the United States a global leader in fighting climate change, while putting tens of thousands of Americans to work building the energy economy of the future," Stephenson said.

UMWA may not endorse, again

UMWA endorsed Barack Obama in his 2008 run but did not issue a presidential endorsement in 2012 or 2016. It may do the same this year, communications and governmental affairs director Phil Smith said in an email to E&E News.

Trump has made courting coal miners a cornerstone of his strategy. But while many Democrats have given up on coal, they are active on other worker issues the union cares about.

"Conor Lamb was an outspoken leader in the bipartisan effort to secure pensions and health care for retired coal miners. He stood with us every single day until the battle was won," said Roberts. "We will never forget it, and working and retired coal miners in Pennsylvania will stand by him every day, as well."