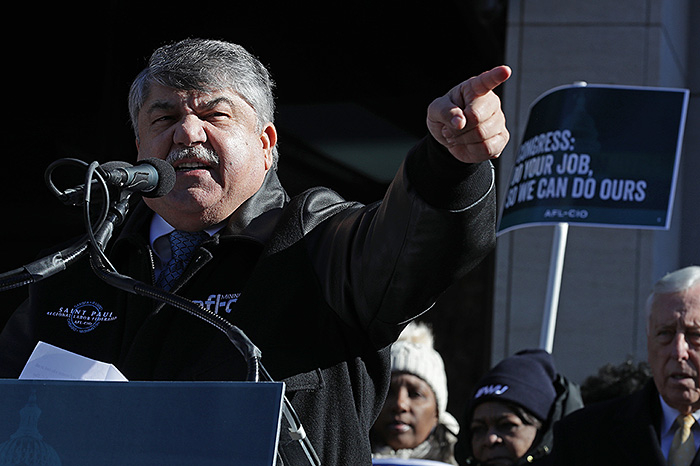 AFL-CIO President Richard Trumka speaking at a rally in 2019. Lawmakers and advocates are mourning his death today. Chip Somodevilla/Getty Images

Richard Trumka, the president of the nation’s largest union federation, has died after four decades in leading labor roles. He was 72.

POLITICO first reported on Trumka’s death, saying sources believed it was the result of a heart attack. The AFL-CIO confirmed the news early this afternoon, and President Biden expressed sadness, calling Trumka a "very close" friend, according to a pool report.

Senate Majority Leader Chuck Schumer (D-N.Y.) took to the floor to mourn Trumka. “The working people of America have lost a fierce warrior at a time when we needed him most," Schumer said.

Trumka started his career in coal mining in his native southwestern Pennsylvania. After law school, he rose through the ranks of the United Mine Workers of America, becoming its president in 1982. He led that union through a number of major strikes, including against the Pittston Coal Co. in 1989 and a nationwide action against Peabody Holding Co. in 1993.

“The global labor movement has lost a giant. Richard Trumka was more than the leader of the American labor movement, he was an unequaled voice for the workers around the world," said UMWA President Cecil Roberts.

Trumka became a more central figure in the labor movement when he was elected secretary-treasurer of the AFL-CIO in 1995, becoming the youngest secretary-treasurer in the history of the group, whose unions represent more than 12 million workers. He went on to become president in 2009 and has put immigration reform and diversity among his priorities.

"He never forgot where he came from," said Sen. Joe Manchin (D-W.Va.). "He dedicated the rest of his career to fighting for America’s working men and women. He was a fierce advocate for working people and a truly decent man."

Trumka has been at the forefront of many labor issues since taking the federation’s helm. He was a key ally to President Obama and frequently clashed with President Trump over issues like union policies and racism, despite many union members’ support for the then-president.

When Biden ran last year on a pro-union platform, Trumka led the labor movement in supporting and organizing for him. The organization has since worked to take advantage of Democratic control of the federal government to pass major labor reforms, including the "Protecting the Right to Organize Act," which passed the House in March but hasn’t gotten a vote in the Senate.

"Standing on Rich’s shoulders, we will pour everything we have into building an economy, society and democracy that lifts up every working family and community,” said AFL-CIO communications director Tim Schlittner.

The American Federation of Government Employees Local 704, which represents EPA Region 5 employees, sent out a tweet noting Trumka’s green credentials. The group said Trumka was "pushing for green jobs" in response to the climate crisis.

In a page out of his earlier days, Trumka had worked recently to support coal miners striking at a Warrior Met Coal mine in Alabama, fighting for higher wages and better benefits.