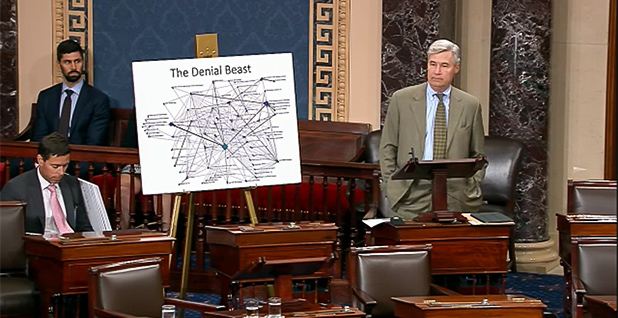 Democratic Rhode Island Sen. Sheldon Whitehouse gave his 250th climate change speech on the Senate floor last week, the kind of milestone that’s reserved either for the committed or the insane, depending on whom you ask.

Whitehouse’s weekly "Time to Wake Up" addresses often serve as a notice for reporters watching the floor from the press gallery that the day is coming to a close.

Like GOP Sen. Dan Sullivan’s jaunty "Alaskan of the Week" speeches, the soliloquies are the kind of thing that end up in the obscure corners of the Congressional Record and muted TVs tuned to C-SPAN, seemingly destined to be rediscovered years later by some baffled congressional chronicler.

But they’ve also given Whitehouse a platform to rail against the fossil fuel industry, the Koch brothers and their interest groups. And they’ve made the Rhode Island Democrat a go-to for any journalist writing about climate policy, what little there is, in the Senate.

Now, Whitehouse says Congress is closer to acting on a comprehensive climate bill than it’s been since 2009, when the Waxman-Markey carbon cap-and-trade bill passed in the House and failed to move in the Senate.

"We’re very close," he said, regarding a relatively broad consensus that a revenue-neutral price on carbon is the path forward on climate.

"There’s a baseline understanding of what needs to take place," Whitehouse said in an interview after the 250th speech last week. "I think there are at least a dozen Republican senators who would like to participate in that discussion and do something positive that actually solves the problem."

Whitehouse had a success on that front earlier this year, when he was joined for the first time during one of his speeches by a Republican: Sen. Bill Cassidy of Louisiana.

The pair had gone on a trip to the Louisiana coast together and had begun work on legislation to deal with offshore renewable energy revenues (E&E Daily, May 2).

Whitehouse said he also sees changing winds at the fossil fuel and industry groups that he’s spent hours criticizing on the floor. He’s talked about the Koch brothers hundreds of times, but more recently, he’s taken aim at the U.S. Chamber of Commerce and National Association of Manufacturers.

But after all his speeches, it remains unclear how much he’s moved the dial in his own chamber.

"It just gets stronger every time he talks," Inhofe joked, adding that despite their differences, they’re "good friends."

There’s some precedent for what Whitehouse is doing.

Between 1967 and 1986, former Sen. William Proxmire (D-Wis.) spoke on the floor every day urging the Senate to ratify the U.N. Convention on the Prevention and Punishment of the Crime of Genocide.

Originally ratified by the United Nations in 1948 during the Truman administration, the treaty languished in the Senate for years. Proxmire gave more than 3,000 speeches before the Senate finally signed off in 1986.

Sen. Brian Schatz (D-Hawaii), a fellow climate hawk who has joined Whitehouse in his speeches from time to time, said that in the world of politics, where praise is doled out generously for minor achievements, Whitehouse is "the single most fearless individual in politics that I ever have met."

"Sometimes we have caucus lunches, and there are probably 10 or 15 moments when we are all applauding each other. It gets crazy," he said on the Senate floor last week. "But I want to take this moment on the Senate floor to applaud someone who really deserves it and who has really displayed extraordinary leadership."

Whitehouse, for his part, feels as if the "Time to Wake Up" speeches have given voice to an issue that wasn’t being talked about when he started delivering them more than five years ago.

"That was the time when the Obama folks weren’t talking about climate change, they had shut down cap and trade, Citizens United had put the fossil fuel industry in the driver’s seat of the Republican Party, there was no conversation about it," he said. "So this really was a very small candle in a very dark place."

Over time, he said, the speeches helped him convince his Senate colleagues he sincerely cares about the issue. But he doesn’t want to give Proxmire a run for his money when it comes to perseverance.

As Sen. Ed Markey (D-Mass.) gave a speech on the floor last week praising his efforts, Whitehouse interjected and quipped, "May I propose to my wonderful colleague, the senator from Massachusetts, that the good Lord forbid that I have to get to 500 such speeches before we solve this problem?"