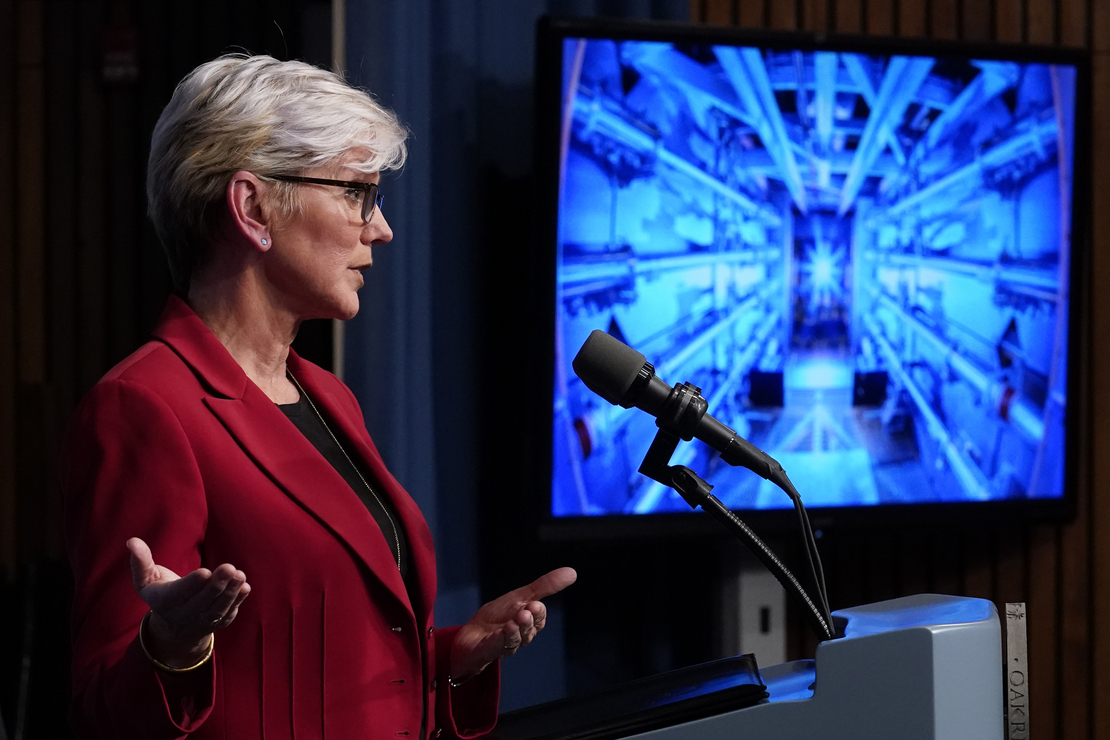 The Department of Energy on Tuesday celebrated a major fusion energy milestone, outlining how scientists for the first time were able to produce more energy from a reaction than was consumed.

“This milestone moves us one significant step closer” to having zero-carbon fusion energy “powering our society,” Energy Secretary Jennifer Granholm said at a DOE ceremony celebrating the results of an experiment by Lawrence Livermore National Laboratory (Energywire, Dec. 13).

But experts say commercial fusion is likely several decades away, raising questions about how soon the technology can play a role in decarbonizing electricity.

DOE is now facing a challenging task of determining which competing fusion technologies should be initially funded to try and produce carbon-free fusion power for the U.S. grid by the 2040s.

The first step in that process ends tomorrow, when the agency will close off applications for $50 million in initial research grants to help private fusion developers create blueprints for a utility-scale pilot plant that could deliver at least 50 megawatts of power to the grid. The funding is supported by a $50 million authorization from Congress in the 2020 Energy Act.

The pilot plant strategy was backed by DOE’s Fusion Energy Sciences Advisory Committee in its 2020 report, “Powering the Future: Fusion & Plasmas” and by an expert committee of the National Academies of Sciences, Engineering and Medicine in a report a year later, “Bringing Fusion to the U.S. Grid.” The idea is that a first-of-a-kind pilot would help persuade U.S. utilities that the technology is scientifically possible and worth massive future investments.

The goal is “hopefully to enable a fusion pilot to operate in the early 2030s,” said a senior DOE official who was unwilling to be identified by name because the grant application process is still open and confidential.

DOE says it is hoping to stimulate competition among teams of fusion developers that include private entrepreneurial firms, university scientists and national laboratory researchers.

At least 15 pioneering private fusion companies are seeking the pilot plant grants, according to an industry advocacy group, the Fusion Industry Association. If the winners are able to meet a series of increasingly rigorous engineering and scientific milestones, they may qualify for to the $415 million in research grants, if Congress appropriates the entire amount. They also would be able to form partnerships with DOE’s national laboratories under the program.

Only a few pilot plant design applications are expected to be chosen, Fusion Industry Association CEO Andrew Holland said in an interview. To remain in the program, fusion teams would have to meet a progressive series of technical milestones, showing they can solve remaining steep engineering challenges. Some companies may be admitted to the program in future years, industry officials hope.

DOE is beginning the process as Republicans are about to take tenuous control of the House and are vowing to scour DOE grants to look for “the next Solyndra,” referring to a solar company supported by the Obama administration that later went bankrupt.

There also is a question of whether funds from Congress will be adequate to complete research and designs for fusion pilot plants.

The companies’ individual bids add up to $2.6 billion in total requests for federal funding in the fusion pilot plant project, an amount far beyond what is currently authorized, Holland said.

“There’s not nearly enough” money, Holland said. The fusion companies will watch carefully to see whether funding for the pilot plant project increases in the Biden administration’s fiscal 2023 budget, he said.

Granholm said DOE will consider all the applicants, with no favorites. “We are just looking at the best proposals that come in,” Granholm said Tuesday. “Hopefully we’ll have a decision early in the new year,” she said.

The current federal funding “is relatively modest. But there is an expectation that the program will grow very substantially,” once companies show credible roadmaps for solving technical challenges, he said

The challenges in commercializing fusion energy were apparent Tuesday when DOE released details of the first-ever successful demonstration of “net” energy fusion.

The threshold was crossed around 1 a.m. PST on Dec. 5, when scientists fired the world’s largest laser cluster at a tiny capsule containing a BB-sized pellet of hydrogen fuel, igniting it and fusing the hydrogen atoms into helium, releasing an instantaneous burst of energy.

Around 2 units of laser energy went into the experiment, producing 3 units of heat energy. It took much more energy to fire the lasers, which were built starting in the 1980s for research on nuclear weapons. The more advanced, efficient lasers in use today would do the job far more cheaply, Lawrence Livermore scientists said.

Steven Cowley, director of DOE’s Princeton Plasma Physics Laboratory in New Jersey, compared the fusion experiment to attempts by a camper to light a fire at a campsite.

In experiments going back decades, researchers tried to “light the kindling” to start a fire, but the match flame wasn’t strong enough. Time again they failed, he said Tuesday before DOE’s event.

This time — by raising the power of the laser shot and making other changes in the experiment — the “match did ignite the kindling” and the logs above in the analogy, Cowley said, if only for the a few billionths of a second.

A utility-scale fusion reactor would have to not just produce a momentary reaction, but rely on durable components and reliable systems that can produce power repeatedly. Those technological building blocks do not yet exist.

“We have the materials for a [U.S.] pilot, but what we don’t have are the materials that would make a practical, economic, commercial plant,” said Kathryn McCarthy, an Oak Ridge National Laboratory scientist, speaking at a White House conference on fusion in April. McCarthy directs U.S. contributions to the International Thermonuclear Experimental Reactor (ITER) project under construction in France, the world’s largest fusion research facility.

“It’s not straightforward once you’ve made fusion happen as we have, to go to commercial fusion,” Cowley said at the April conference. “But we have the tools to do it.”