After the blazes: Poisoned water and ‘a flood on steroids’ 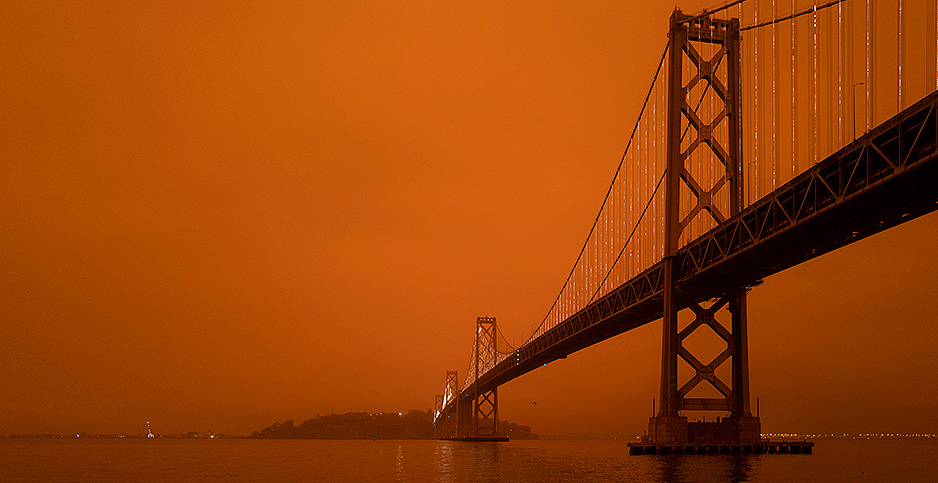 Historic wildfires raging from California to Colorado are weakening watersheds and setting the stage for deadly mudslides and flooding and, in some places, threatening to poison critical water supplies.

Fueled by record-setting temperatures and strong winds, blazes are wreaking havoc in the West, decimating entire towns like Malden in eastern Washington state, where 80% of the homes and structures — from the fire station to city hall — were burned to the ground.

But the fires don’t just pose a threat to things that burn. More intense and larger fires are also shifting the very ground in Western states. Severe wildfires can change the hydrologic response of a watershed so quickly that even a relatively modest rainstorm can trigger flash floods and steep terrain debris flows, said Jason Kean, a research hydrologist with the U.S. Geological Survey’s Landslide Hazards Program in Golden, Colo.

"A debris flow is kind of like a flood on steroids," said Kean. "It’s all bulked up with rocks, mud, boulders, and then it becomes a different animal that can be even more destructive than a flood."

Burned and denuded land no longer has the vegetative root structure to help stabilize the soil and is easily eroded by rain, Kean said, adding that the land also can’t absorb water the way it did before the fire. High-severity fires can also cause soil surfaces to harden or even cause soil to repel water, Kean said.

It’s a scenario that’s played out more and more as the size and intensity of fires grow in a warming world.

In December of 2017, one of the largest fires in California — the massive Thomas wildfire — burned through large swaths of Santa Barbara and Ventura counties. In January, before the fire was contained, intense bursts of rain fell on a portion of the burn area above the city of Montecito, Calif., weakening the watershed there. A massive slew of boulders and debris overwhelmed the town without warning, killing 23 people and destroying more than 400 homes in its path.

Another lesser-known threat to the region’s water is gaining attention in urban areas affected by wildfires: chemical contamination.

In cities that have experienced devastating fires, water officials are finding cancer-causing benzene and other volatile organic compounds in contaminated and fire-damaged water infrastructure.

Such was the case in the Northern California town of Santa Rosa after the Tubbs Fire in the fall of 2017 and again in the town of Paradise after the deadly 2018 Camp Fire. Earlier this week, the carcinogen was detected in the Riverside Grove neighborhood near Boulder Creek, Calif., a community devastated by the CZU August Lightning Complex fires.

Andrew Whelton, an associate professor of civil, environmental and ecological engineering at Purdue University, said such contamination is gaining more attention — and scrutiny — given the lack of water testing after wildfires.

"We don’t know if this has happened prior to 2017 because, as it turns out, states and municipalities and first responders didn’t test drinking water systems that have been struck by fire for that type of contamination," said Whelton.

The threat of debris flows, flooding and mudslides is one of the more understood and researched threats of wildfires.

Kean is one of three full-time employees in Colorado working with other federal partners from the Forest Service and the California Department of Forestry and Fire Protection to assess such post-fire hazards.

He and his colleagues generate hazard maps showing which drainage basins are most susceptible to debris flows, as well as estimates for how much rain it would take to trigger those flows, levels called "rainfall thresholds."

The National Weather Service then uses those readings when watching the rains in the winter to alert residents when to prepare to evacuate or issue warnings, he said. The biggest warning flag: intense bursts of rain that can trigger fast-moving floods and pick up large amounts of debris.

Kean and his team still have time to prepare and plan for California’s winter rains, and a blanket of snow is currently hampering fires in Colorado without the risk of floods. But he admits his job has grown more difficult because his team is small but has a national scope, and each fire has its own issues.

"When it’s happening all at once," he said, "it’s hard to keep it all straight."

Depending on the size and intensity of the fire, Kean said it can take two to five years, and in some cases longer, for vegetation to grow back and a watershed to heal. Until that happens, there’s a threat of flooding, debris flows, mudslides and contamination if polluted soil is moved to the water.

"Every place recovers a little bit differently and at a different rate. A fire in coastal Southern California might recover faster than a fire in Colorado," he said. "Generally speaking, with each year after the fire, the amount of rain it takes to cause a problem goes up, so those rainfall thresholds go up each year."

In California, geology has facilitated disaster. The region is known for having "alluvial fans," slopes created over long periods of time that start at a narrow point and spread into the shape of an upside-down fan or ice cream cone. A task force that analyzed the Thomas Fire found that debris flows are a common characteristic of alluvial fans (Greenwire, Jan. 22).

And the same explosive conditions that can trigger mudslides and debris flows can also unearth or move contaminants into nearby rivers and streams — from charred industrial sites, cars and homes, or even former mining sites where fire and then water strip away soil and vegetation keeping metals or other materials in place.

One USGS study found that a wildfire in 2010 near Boulder, Colo., that had burned a forested watershed had also changed the soil’s hydrology and mobilized arsenic and metals from legacy mining sites in the area, creating a risk to water supplies.

Sheila Murphy, a hydrologist at USGS who co-authored the study, said that unlike a chemical spill that causes an immediate impact on water quality, effects of a wildfire may take months or even years to become evident.

"There’s a lot of focus on the fire when it’s happening, like ‘My gosh, these homes are burning; these buildings are damaged. How do we get the fire out and save these people’s lives?’" said Murphy. "The issue you see with water effects is often very delayed."

Among the complicating factors is the whipsaw seen with weather. "Yesterday, it was 90-something degrees [Fahrenheit] here in Colorado and we were getting ash deposition from the fires, and now it’s 32 degrees and it’s snowing," said Murphy. "It’s kind of a little roulette."

As the severity and size of wildfires grow, so do a series of complex threats to the nation’s water systems — from debris to dangerous pollution, depending on the location and type of fire.

Wildfires that only affect wildlands with no urban fill or homes generate sediment and debris that will be washed into nearby bodies of water, all of which can affect smell or taste of drinking water depending on what nearby communities rely upon, said Newsha Ajami, director of Urban Water Policy with Stanford University’s Water in the West program.

If a wildfire destroys homes, cars or other facilities, more concerning debris will need to be managed before the next storm or rain event to control for metals, chemicals and oils. Lastly, there’s no way to control for ash and smoke from wildfires that travel far distances and eventually precipitate on soil and water far from the site of the fire.

Clint Snyder, assistant executive director of the Central Valley Regional Water Quality Control Board in Redding, Calif., said water sources like lakes that feed drinking water plants can become overloaded with sediment and debris, creating challenges for treating drinking water. Smaller systems will have to move to boiling notices if the plants are taken offline.

Unlike fires that are isolated to timberlands, fires that occur in more urban environments are found to have increased concentrations of total and dissolved metals; chemicals released from burning coal, oil, gasoline and trash known as "polyaromatic hydrocarbons"; and things like E. coli bacteria, said Snyder.

Another emerging threat in Northern California is contamination from benzene, a volatile compound linked to cancer, and other volatile organic compounds that have been found in damaged water distribution systems following massive fires.

EPA officials in an interview said they’re actively researching how wildfires affect plastic water piping in the distribution system. "It’s beyond the treatment facility; it’s happening in the distribution line going to households, potentially into their plumbing, so this is a whole new area that we’re engaged with our Office of Research and Development," said Corine Li, manager of EPA’s drinking water office for the Pacific Southwest region.

For now, it’s still unknown how chemicals like benzene enter drinking water distribution systems, said Whelton. "There isn’t 10 or 15 years of ‘This is how it works; this is the effect,’" he said. "We have to be more agile in how we respond because we don’t know that much about it, so we have to keep an open mind."

Yet another theory, he said, is that underground plastic pipes and meters are heated during a wildfire, basically "cooking plastic underground." Those materials, according to the theory, then release VOC and SVOC byproducts that enter into the drinking water, since they can’t escape into the air.

"The complicating issue is that contaminated water gets drawn into buildings and basically incapacitates the building because you contaminate the plumbing," said Whelton. "That’s new, in that it wasn’t really known before."