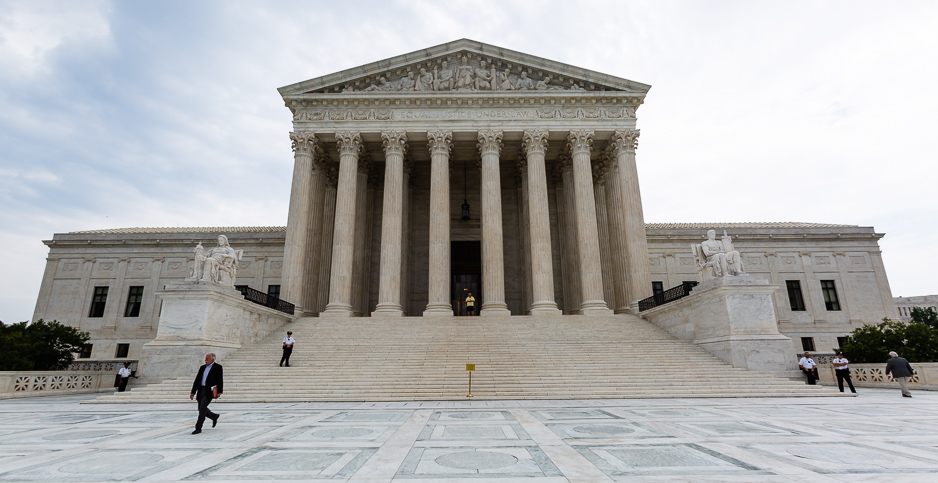 The Supreme Court heard arguments in a case today about whether union access regulations for farmworkers amount to a government taking of private property without compensation. Francis Chung/E&E News

The Supreme Court today waded into a complicated union organizing case that could have far-reaching implications for safety inspections, and the justices appeared genuinely flummoxed by how to decide it.

Cedar Point Nursery v. Hassid concerns a California regulation that grants union organizers access to private property to meet with workers during nonworking hours for a maximum of three hours per day for a total of 120 days annually.

Cedar Point Nursery, which grows strawberry plants in California near the Oregon border, contends that the regulation’s access provision is unconstitutional and a categorical violation of the Fifth Amendment’s takings clause, which prohibits the taking of property without just compensation.

Keeping people from accessing one property, their lawyer, Joshua Thompson of the conservative Pacific Legal Foundation, said today, is "the most fundamental property right."

But what the farm is asking for — a Supreme Court precedent that says providing access is an easement requiring compensation — has drawn significant attention and criticism from a wide variety of parties, including the Biden administration. They argue that it would inhibit the ability of regulators to conduct routine public health and safety inspections, such as at coal mines or nuclear power plants.

"Why doesn’t benefiting or promoting peaceful labor relations fall under the same category as safety inspections?" asked Chief Justice John Roberts. "In other words, it benefits the public interest."

Justice Stephen Breyer, a member of the court’s liberal wing, said there are "dozens and dozens and dozens" of statutes that would be affected by the relief the farm is seeking.

What if, he said, in the future everyone has their own spaceship? Would regulators be restricted from accessing property to inspect it "because it might blow up?"

"Can they do that?" he asked. "What’s the difference?"

Thompson countered that there is a difference between the right to "search" and the "right to exclude," and in this instance, the government is taking "that right from you."

Throughout the argument, the justices struggled with how to define how far-reaching their decision should be or drawing lines on the limits of both sides’ arguments. For example, if they ruled that it was a taking, how much compensation would the farm be owed? Thompson didn’t provide an answer.

Justice Sonia Sotomayor said the farmers haven’t adhered to a definition of "easement" found in either federal law or state law.

"I guess you want us to make it up somehow," she said.

However, California Solicitor General Michael Mongan also faced tough questions in his defense of the regulation.

He argued that the farm’s request to characterize the regulation as an automatic, categorical or "per se" taking lacks nuance and is a "blunt instrument." He contended that instead, the court and others could conduct a balancing test that weighs the benefits of a regulation against the potential burdens it places on a landowner.

But that’s not the case the farm brought.

The justices had a hard time with where to draw the line there as well. Multiple tried to pin Mongan down on what, exactly, he would consider an automatic taking.

Justice Clarence Thomas asked: What about a regulation that forces you to allow the state police onto your property for training exercises?

"How is the intrusion of the police officers different from that of the union organizers?" he asked.

Mongan replied to his questions, and others, with suggestions that challenges could be brought that conducted the sort of balancing act he outlined.

He further added that the type of categorical definition the farm seeks is typically reserved for a requirement that is continual and permanent, not something temporary and limited, like the union organizing regulation.

But Sotomayor said that sort of rationale "won’t satisfy many people," appearing to refer to the justices, and Justice Elena Kagan said Mongan was running "into the line-drawing problem."

If Mongan acknowledges that a regulation that allows access 24 hours a day, 365 days per year, is a categorical, automatic taking, "ratcheting back from that, when does it stop being a per se taking?" Kagan asked.

For the farm, he wondered why it was seeking such a broad ruling when, in his view, it could prevail more narrowly under Supreme Court precedent.

He said he was "mystified by some of the arguments here."

"It seems like you are asking us to reinvent the wheel," he said to Thompson. "It’s not a new issue."

Later, he told Mongan that a previous ruling said the balancing test is that the union representative can’t access the property when there are alternative means of communication.

That, he said, would appear to apply here.

Mongan countered that that could be a consideration in weighing whether a taking has occurred.

"But it wouldn’t seem to provide the basis for adopting a broad per se rule," he said.

A ruling in the case is expected by the end of June.