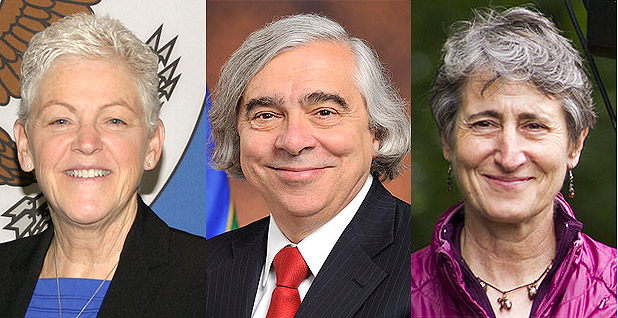 In a series of exit memorandums released today, federal agencies lauded their accomplishments during the past eight years under President Obama. Several energy and environmental agencies noted their work on boosting renewable energy, fighting pollution and addressing climate change.

Obama said in a letter that when he took office in January 2009, "America faced a moment of peril unlike any we’d seen in decades," noting that the economy was in recession, the auto industry was about to collapse, and vast numbers of American troops were still overseas fighting wars in Iraq and Afghanistan. Further, he said, "on challenges from health care to climate change, we’d been kicking the can down the road for way too long."

Beating back climate change became one of Obama’s top priorities as president. On the White House’s website, the administration notes in bar graphs that electricity generated from wind and solar has jumped dramatically during Obama’s time in office, while economic growth has surged, with carbon emissions falling.

"Our dependence on foreign oil has been cut by more than half, and our production of renewable energy has more than doubled," Obama said in his letter.

"In many places across the country, clean energy from the wind is now cheaper than dirtier sources of energy, and solar now employs more Americans than coal mining in jobs that pay better than average and can’t be outsourced."

The president also touted his administration’s work on the 2015 climate change pact reached in Paris, saying his White House "brought nearly 200 nations together around a climate agreement that could save this planet for our kids."

Many of Obama’s policies, however, are under serious threat now. President-elect Donald Trump, set to enter office later this month, has said he will withdraw the United States from the Paris deal as well as roll back many of the Obama administration’s environmental and energy regulations. Congress under Republican control will also be part of the effort.

Time to ‘pass the baton’

In their exit memos, agencies sought to defend Obama’s legacy on the environment.

U.S. EPA Administrator Gina McCarthy noted her agency’s move to reduce carbon pollution with the Clean Power Plan, which targets power plant emissions but has been put on hold by the Supreme Court. The agency chief said that on climate change, "EPA will need to continue implementation" of the plan, which seems unlikely under Trump.

McCarthy also touted EPA’s controversial Waters of the U.S. rule, which has been stalled in federal court, as well as its actions to curb methane and ozone. Setting new emissions standards for cars and trucks and passage of the Toxic Substances Control Act reform bill also get notice in EPA’s exit memo.

In addition, the EPA administrator mentioned the drinking water crisis in Flint, Mich., for which the agency came under scrutiny due to its lackluster response as lead seeped into the city’s water supply.

"The situation in Flint has sadly reminded the nation that there is still much work to be done to protect our precious drinking water resources and aging infrastructures," McCarthy said, noting that EPA’s Drinking Water Action Plan is a "blueprint" for keeping safe drinking water across the country (Greenwire, Dec. 1, 2016).

McCarthy said it was "an honor" to serve in the Obama administration and praised the president’s leadership.

"As we pass the baton, we are proud to have run our leg of the race with steadfast vigor, and left a healthier country and a stronger EPA," McCarthy said.

Energy Secretary Ernest Moniz applauded his staff in his exit memo, calling them "an extraordinary group of public servants, both career and ‘transient’ (like me!)."

"They and their families deserve our collective gratitude for the long hours and days and months and years of service, too often against the tide of those advancing narrow interests. They are patriots," Moniz said.

Moniz lays out several "actions needed" in his memo, including those to combat climate change, such as doubling U.S. spending in clean energy research and development; deploying advanced and small modular nuclear reactors; and advancing "policies that accelerate the transition to a clean energy economy across all sectors, such as a carbon emissions charge."

Several other noteworthy events for DOE get play in the memo, including the Iran nuclear deal, responding to Superstorm Sandy and the Deepwater Horizon oil spill in 2010, and even the Quadrennial Energy Review. Moniz also advocated continuing "to reduce the role of nuclear weapons in U.S. national security strategy," where the opposite may happen under Trump.

In her exit memo, Interior Secretary Sally Jewell said the Obama administration has helped protect hundreds of millions of acres of land and water through new protected areas, national parks and monuments and "has achieved more successful wildlife recoveries of endangered species than all other Administrations combined."

Jewell said she is thankful for "the incredible dedicated career employees" at Interior as well as grateful to the department’s political appointees.

"Collectively, we take pride in the opportunity we have had to make a difference on some of the most pressing issues of our time," Jewell said.

Other agencies noted their work on the environment, as well, in their exit memos.

The Department of Agriculture said the Forest Service helped increase forest restoration by 9 percent from 2011 to 2014, according to its memo. In its memo, the White House Office of Science and Technology Policy noted the Paris Agreement as well as the administration’s Climate Action Plan. And the Commerce Department mentioned that it launched the U.S. Climate Resilience Toolkit, which helps communities address climate change risks.

Transportation Secretary Anthony Foxx’s exit memo highlighted programs to cut greenhouse gas emissions from the sector and adapt to climate change that could be diminished in the next administration, like fuel economy rules, but also the potential of new technologies to change mobility and curb emissions.

"The next administration is entering a period of advanced automated technologies in transportation, an infrastructure system that continues to work for some and against others in society, dramatic demographic shifts, an increase in extreme weather events in a changing climate, and a backlog of projects needed across the country with not enough resources to address it," he wrote.

He recommended that the next secretary continue the "Smart City" challenge, develop automated and connected vehicle policies, regulate drones, and deploy advanced technologies. He also stressed the need for new policies to raise enough money to meet the country’s transportation needs, which is likely to be a spring focus of Congress and the incoming administration.

Speeding up federal projects can be done without "undermining environmental outcomes," Foxx said, citing some examples from his tenure. Elaine Chao, Trump’s pick for Transportation secretary, has said one of her priorities would be to streamline transportation projects and reduce regulations.

Secretary of Defense Ashton Carter listed his agency’s Climate Change Adaptation Roadmap as an accomplishment in his exit memo.

In the third to last paragraph of a more-than-9,000-word memo, Carter touted Defense Department actions to increase energy and water security, including investments in renewable energy and energy efficiency.

"Already, the Department has reduced energy usage at contingency bases by 30 percent, is on track to meet its commitment of 3 gigawatts of renewable energy purchases at our bases by 2025, and has executed more than $1.8 billion in Energy Savings Performance Contracts," he wrote.

"The impacts of climate change may increase the frequency, scale, and complexity of future missions, including defense support to civil authorities, while at the same time undermining the capacity of our domestic installations to support training activities," he wrote.