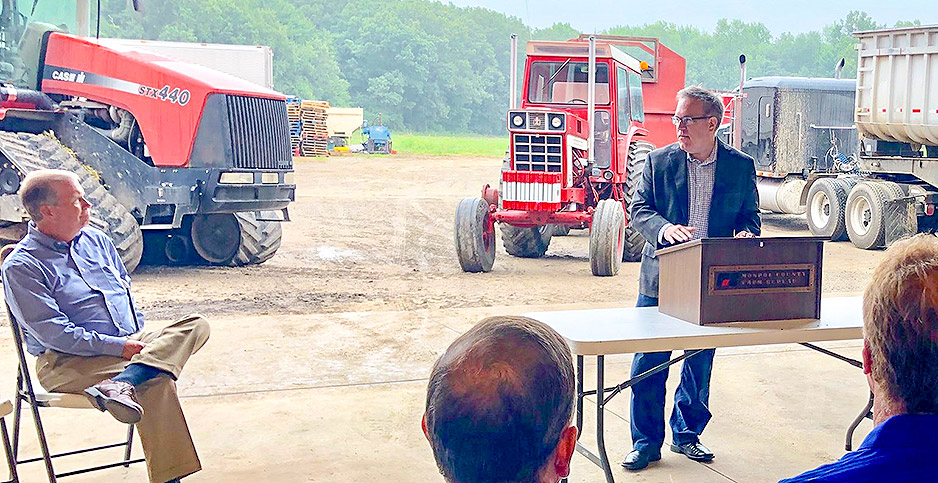 "I don’t think these Cabinet members accidentally ended up in these districts," said Nathan Gonzales, editor of the nonpartisan Inside Elections. "Maybe there are Republican voters who are a little disaffected by Congress but they like the president, and being able to see someone who is in the administration and in the Cabinet might be an appealing draw for them."

"Acting Administrator Wheeler travels throughout the country to promote the president’s agenda, including most recently the new Affordable Clean Energy rule," said EPA spokesman John Konkus. "Unlike the Obama administration, Trump’s EPA is dedicated to listening to and working with all Americans regardless of their ZIP code."

Earlier this week, Wheeler appeared at an event in Zanesville, Ohio, with Rep.-elect Troy Balderson, who narrowly won a special election this month for an open seat in Ohio’s 12th District. The district, historically red, has also seen recent visits from Trump and Vice President Mike Pence (Greenwire, Aug. 8).

At the Ohio Chamber of Commerce event, Wheeler kept the focus squarely on EPA’s rollback of the Obama-era Clean Power Plan and touted the Trump administration’s replacement rule as a win for state authority, as well as businesses, homeowners and senior citizens in his home state of Ohio.

"The Obama plan certainly picked coal to be a loser," Wheeler said. "What we’re doing is setting guidelines so states can then set targets on a plant-by-plant basis."

And four days earlier, Wheeler was the guest at a roundtable in Iowa about the renewable fuel standard, the Waters of the U.S. rule and agricultural issues alongside Iowa Republican Rep. David Young and Gov. Kim Reynolds (R). Young is facing off with Democrat Cindy Axne for the 3rd District, considered one of the nation’s most competitive House races.

The former Texas governor appeared Monday at an energy roundtable with a host of oil, gas and utility executives, as well as Republican Rep. Pete Sessions, who’s facing a strong challenge from Democrat Colin Allred.

A few weeks earlier, Perry attended a roundtable in New York’s 24th District and toured the James A. FitzPatrick nuclear power plant in Oswego County along with Katko.

‘Right side of the Hatch Act’

Ethics experts say Perry’s and Wheeler’s appearances don’t appear to have violated any ethics laws given the agency heads stuck to talking about policy — not politics.

Zinke is facing other calls for investigations and federal probes, including the OSC’s ongoing look into whether he violated the Hatch Act for showing off a photo of his "Make America Great Again" socks on Twitter (E&E News PM, July 9).

Two years ago, it was a different administration and different party that found itself in hot water regarding the Hatch Act. The OCS determined then-Housing and Urban Development Secretary Julian Castro, a member of the Obama administration, had violated the Hatch Act when fielding Yahoo News anchor Katie Couric’s questions about the presidential race and his own chances of being chosen as Hillary Clinton’s running mate.

It doesn’t appear Trump Cabinet officials have violated any federal laws, but ethics watchdogs say they’re concerned about a broader underlying political strategy at play within the White House.

Earlier this month, a White House official noted the agency heads’ busy travel schedule when laying out the president’s fall campaign plans. That agenda is slated to include campaign events in as many as 15 states during the next three months to support House, Senate and gubernatorial candidates, with appearances in North and South Dakota, Missouri, Montana, Nevada, Kentucky, and Tennessee (E&E News PM, Aug. 21).

"It appears as if there’s a comprehensive and deliberate effort going on within the Trump administration to use public funds to affect the elections and send the people like Andrew Wheeler to these districts under the pretense of official duty but fully targeting the elections in contested districts," Holman said.