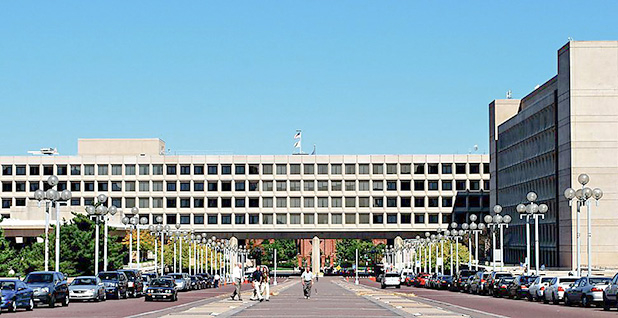 The Energy Department is offering employees in the Office of Energy Efficiency and Renewable Energy early buyouts, according to a document obtained by E&E News. Department of Energy

The Department of Energy today offered buyouts and early retirements for up to 35 people in the agency’s renewable energy and efficiency office that’s slated for deep funding cuts under President Trump’s budget proposal.

DOE in an email obtained by E&E News said 35 positions within the Office of Energy Efficiency and Renewable Energy in Golden, Colo., and the agency’s Washington headquarters are eligible for the buyouts or early retirement, and all applications must be received by Aug. 15 with roll-off dates between Aug. 19 and Sept. 30.

A spokeswoman for the agency said the limited offer is aimed at aligning DOE with fiscal 2017 spending levels, and no further action is expected until funding for fiscal 2018 is decided. Trump’s initial "skinny budget" for fiscal 2018 called for a steep cut of about 70 percent to the office, mirrored by significant cuts in the House spending measure.

But a federal employee familiar with the process said the buyouts are a possible signal for future cuts.

"Putting out a buyout notice is precursor to layoffs," the person said.

Chalk’s memo lists dozens of positions in Colorado and Washington eligible for early buyouts, including engineers, scientists, technicians and analysts.

"However, as the FY 2018 program direction budget gets finalized and based on other factors, EERE may or may not expand these authorities to additional positions by issuing subsequent windows of opportunity via a follow-on memo," Chalk wrote.

One of the conditions for accepting a buyout is that an employee who takes the package and rejoins the federal government within five years must repay the full amount of the buyout, effectively closing the door for good on employees who take the offer.

While this is standard language in federal buyout offers, the effect might be particularly strong at DOE, an agency that has frequently rehired former employees after stints outside the government.

Such a limitation would curb the applicant pool for managers at DOE should the agency reverse course or vacancies emerge.