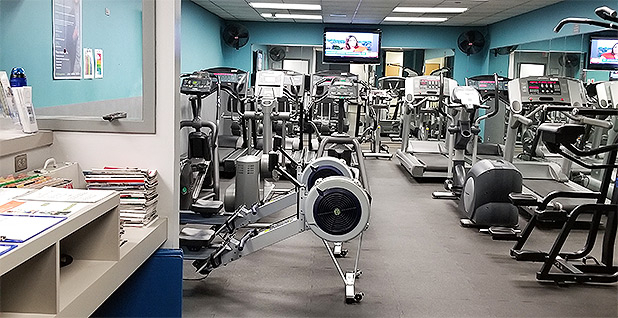 Employees who work at U.S. EPA's Chicago-based Region 5 office have access to this fitness center. Special to E&E News

On Thursday, EPA union leaders received an email from an agency labor attorney saying the agency planned to stop funding for fitness subsidies and fitness centers by the end of next month.

"This serves as official notice that the agency will discontinue fitness subsidies and fitness center funding agency-wide, which will result in a savings of nearly $ 900K per year for the agency. Discontinuation of this funding is targeted for July 31, 2017," said the attorney in the email, which was obtained by E&E News.

Mark Sims, president of the EPA Unit of the International Federation of Professional and Technical Engineers Local 20, based in Region 9, called the plan a "bad idea and shortsighted."

"It is something that has been provided for a long time and now it’s suddenly going to be taken away," he said. "What’s their basis for doing so, I don’t know."

Tony Reardon, president of the National Treasury Employees Union, said in a statement the union "has been notified that EPA intends to discontinue offering fitness facilities to employees."

"NTEU has asked for a briefing and hopes to bargain with the agency to retain some fitness facilities," Reardon said. "This appears to be a case of an agency being penny-wise but pound-foolish as fitness centers save the government money through healthier employees."

Reardon noted that EPA employees represented by NTEU Chapter 280 pay a monthly fee for access to a fitness center, which is used by multiple agencies.

Jahan Wilcox, an EPA spokesman, said the fitness benefit funds would be used for the agency’s "core activities" instead.

"We have ended taxpayer-funded fitness centers at EPA; a program that was costing American taxpayers $900,000 per year. Disinvestment in using federal funds for EPA fitness centers will allow the agency to invest this money in core activities to protect the environment," Wilcox said in a statement.

In his email, the EPA labor attorney said the date of the funding stop for fitness benefits may fluctuate depending on when already-obligated resources may end. In addition, negotiations on the fitness issue will be conducted on "the local level."

EPA union leaders have also been invited to a briefing on ending fitness benefits Wednesday.

After that meeting, O’Grady said he will talk to his union law firm about whether or not to file a grievance.

"I’m going to make that decision then. Quite frankly, I don’t think there is much that we can do," O’Grady said.

Sims said he was considering filing a grievance over EPA’s decision to end fitness benefits.

"A change in working conditions is always negotiable," Sims said.

Union officials pointed to agreements between EPA management and labor groups that are problematic for the agency’s decision to halt funding of fitness benefits.

NTEU’s collective bargaining agreement with EPA said employees’ access to fitness centers will continue under the agreement and any changes to that condition will be handled at the local level.

In addition, a memorandum of understanding signed in 2012 between EPA and unions in Region 9 says the regional office is "committed" to setting aside $40,000 for equipment-related expenses and the fitness center will occupy roughly 5,200 square feet in its office building.

"We expect them to comply with the MOU they signed in 2012," Sims said.

‘It’s in our basement’

Fitness centers are spread throughout the agency to be used by employees. In a 2013 EPA blog post, Craig Hooks, then a senior agency official, said over 94 percent of EPA locations had access to a fitness center.

"It’s in our basement. It doesn’t have a running track or a pool. It just has some treadmills and weights," O’Grady said, referring to the fitness center in EPA’s Chicago-based Region 5 office, which is used by other federal employees.

O’Grady said his understanding of EPA’s plan is to end stipends for employees’ gym memberships and also end supplement funds provided by EPA to the fitness centers. That will mean EPA employees will have to pay larger fees to keep those centers open.

"For the most part, they [fitness centers] will stay open. Employees will have to pay more. If they don’t, they may close," O’Grady said.

EPA employees’ gym benefits have grabbed Administrator Scott Pruitt’s attention in the past. On "Fox and Friends" in April, he was asked about EPA paying nearly $15,000 for employees’ gym memberships.

"Well, the gym memberships ended yesterday. It was quite something to hear about that out of Nevada," Pruitt said. "That was the previous administration that granted those gym memberships, rather expensive."

He added, "It was something that needed to end."

Conservative group Americans for Tax Reform dug up receipts for gym memberships that Pruitt was questioned over in his Fox interview. The documents showed that EPA’s Las Vegas office paid $14,799.63 for the memberships.

The EPA inspector general has also looked into fitness benefits for employees in the past. In a report released this February, the agency watchdog found two transactions, totaling $14,985, were for gym memberships that were improperly paid in advance (E&E News PM, Feb. 17).

"There was a lot of press attention on that, and it grabbed the administrator’s attention. That’s what brought his attention to this issue in my belief," Sims said.

"What happened in Las Vegas may be a triggering issue for this."