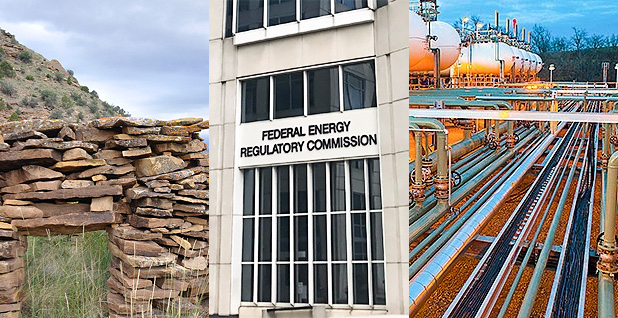 Government officials in charge of protecting the nation’s cultural resources are calling on the Federal Energy Regulatory Commission to improve its review process for natural gas pipelines near those sites.

The Advisory Council on Historic Preservation sent a laundry list of recommendations last month for how FERC can approach its obligations under the National Historic Preservation Act — a law that requires federal agencies to consult with American Indian tribes, state officials and others on projects’ potential effects on historical areas.

Among the suggestions: Start consultation early; give pipeline companies guidance on coordinating with state and tribal officials; invite local governments along pipeline routes to formally consult on impacts; and, critically, remember that consulting parties are more than everyday commenters.

"They are more than stakeholders or members of the public and participate actively in consultation with the federal agency and its applicant to address how an undertaking may affect historic properties," ACHP Executive Director John Fowler said in a July letter to FERC.

The council’s comments align with a longtime campaign by preservationists and tribal advocates to make FERC’s process more collaborative. The ACHP submitted the letter in response to an effort by FERC to review its natural gas pipeline program.

Reid Nelson, director of the advisory council’s Office of Federal Agency Programs, told E&E News the agency offered the comments to help FERC ensure its pipeline review process is as fair and efficient as possible. He added that the NHPA doesn’t require federal agencies to opt for the most protective options when it comes to historical sites, but it does require them to consult with tribal officers, state officers, local governments and others with a direct stake in properties that could be affected.

“They are more than stakeholders or members of the public.”

"This saves time and money for the proponent, and often enables the best outcome for significant historic properties," Nelson said in a written response to questions from E&E News.

Nelson noted that FERC staff take the consultation process seriously. But, he said, the agency’s efforts to speed up pipeline reviews can sometimes complicate the process. Direct communication with tribes early on could help prevent issues down the road.

"The ACHP has also advised FERC and other federal agencies to acknowledge their responsibility to consult tribes on a government to government basis," he said, "while also recognizing the potential benefits of proponents directly communicating and coordinating with Indian tribes particularly at early stages of project planning."

The advisory council wasn’t the only federal agency to weigh in on FERC’s pipeline policy review this summer. EPA career staff also submitted comments to outline options for studying pipelines’ climate impacts, though those recommendations were later walked back by political officials (Greenwire, July 26).

Nonprofits focused on cultural resources joined the FERC conversation, too. The American Cultural Resources Association and the Coalition for American Heritage urged the agency to amend the economic balancing test it performs for pipelines to include the cost of damaging historical sites.

"Heritage resources not only form and make concrete our collective identity, they provide important economic opportunities," the groups said. "Any damage to these resources should be expressly accounted for in a balancing test to determine whether a project serves the public."

They also echoed the ACHP’s position that FERC should steer consultation with tribes, rather than letting pipeline companies take the lead.

"Too often, however, tribal ‘consultation’ is initiated by a project proponent (as opposed to federal officials with decision-making authority) via form letters and public meetings," they told FERC. "This creates an atmosphere in which tribes are reluctant or unable to share information about sensitive heritage resources."

Federal agencies’ consultation with tribal governments has gotten increased attention in the wake of the 2016-17 protests over the Dakota Access pipeline.

Though the oil project was outside FERC’s jurisdiction, the opposition spurred the Obama administration to launch a broad review of how all federal agencies conduct tribal consultation for big infrastructure projects (Energywire, Sept. 26, 2016).

The ACHP is now urging FERC and other agencies to adopt some of the recommendations from that process.

"The importance of beginning [NHPA] consultation early is frequently mentioned in the tribal comments the ACHP has received about how tribal consultation for infrastructure projects could be improved," the council told FERC last month.

The ACHP also noted that FERC should reach out early to identify tribes that may have a religious or cultural attachment to properties affected by a pipeline.

FERC has faced some recent conflict with tribes that say they’ve been cut out of certain pipeline review processes. The Cheyenne River Sioux Tribe, for example, has been battling the commission over the Mountain Valley pipeline, which crosses West Virginia and Virginia.

The tribe — also an opponent of the Dakota Access and Keystone XL oil pipelines — earlier this year asked FERC for extensive documentation on cultural resources along Mountain Valley’s path. Though the Cheyenne River Sioux are based in South Dakota, tribal leaders say the Great Sioux Nation has historical roots in the East. FERC has maintained that it has no obligation to consult with the Sioux because there is no evidence of them ever occupying Virginia.

Several other tribes and tribal advocacy groups have raised concerns about FERC’s process. The Stillaguamish Tribe of Washington filed comments last month noting that it supports "efficiency, predictability and transparency" in pipeline review but urged FERC not to prioritize those goals over fair consultation.

"They must not be used as a cover for pushing industry projects through without proper Tribal consultation," Chairman Shawn Yanity wrote.

The United South and Eastern Tribes Sovereignty Protection Fund, which represents tribes across the East, told FERC its members "consistently report dysfunction in the current process, including deleterious, irreversible impacts to cultural resources and sacred sites."

FERC has been working to improve its relationship with tribal governments through the years. In 2003, the agency issued a policy statement focused on improving communication with tribes affected by hydropower licensing decisions. The document also established a new tribal liaison position to serve as a point of contact for tribes in any FERC proceeding.

The commission’s current liaison, Elizabeth Molloy, has served in that role since 2006. The commission also designates certain staff as "senior technical experts for cultural resources" to work on NHPA consultation for gas and hydropower projects under review.

"The position was created as part of the Commission’s continuing commitment to improve outreach and promote participation of federally-recognized Indian tribes in FERC’s review process," spokeswoman Tamara Young-Allen said in an email. "Prior to 2016, archeologist staff members within our Office of Energy Projects performed as tribal coordinators."

The ACHP told FERC last month it was eager to work closely with the commission to implement recommendations for further improvements. The council noted in comments to E&E News that its involvement in several of FERC’s past review processes likely helped produce better outcomes.

In 2009 and 2010, for instance, the advisory council coordinated among FERC, BLM, tribes and state officials "to ensure that appropriate and meaningful tribal consultation would be carried out by FERC and BLM" for the 672-mile Ruby pipeline in Oregon, Nevada, Utah and Wyoming.

More recently, the council helped coordinate between FERC and preservation officials in Ohio and Michigan to study impacts to historical sites along the path of the 255-mile Nexus pipeline across Ohio and Michigan. And in 2015 and 2017, it provided guidance on FERC’s responsibility to consult with tribes and others affected by the Algonquin Incremental Market and Connecticut Expansion pipeline projects, and informed tribes of their responsibility to participate in the process "in a timely and responsible way."

"We believe that close collaboration between FERC and the ACHP can contribute significantly to the Administration’s efforts to improve the delivery of needed infrastructure projects," the council said in its letter to FERC.

The comment period for FERC’s pipeline policy review has closed. The agency does not have a deadline for taking action on the various recommendations, and Republican Chairman Kevin McIntyre has noted that it’s possible FERC will decide not to make any changes.