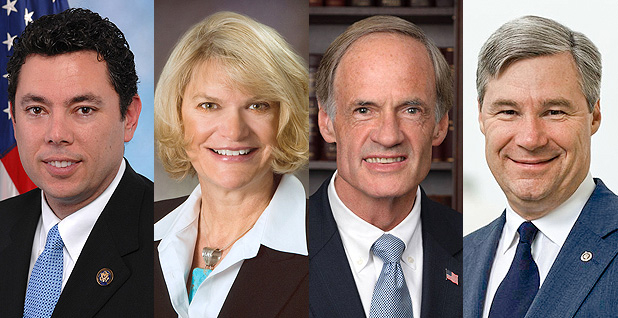 U.S. EPA balked at congressional Republicans’ 2016 request to hand over personal financial disclosure forms submitted by dozens of appointees to two key advisory panels, according to records newly obtained by E&E News. That stance could have continuing relevance, given that two Senate Democrats this month made a similar request.

EPA "makes clear up front that the confidential disclosure reports are confidential and required to be kept so," Kevin Minoli, principal deputy general counsel, told then-House Oversight and Government Reform Chairman Jason Chaffetz (R-Utah) in a May 2016 letter. As a rule, those forms are accessible to members of the public only through a federal court order or as the Privacy Act allows, Minoli wrote. Release to members of Congress is also restricted, he said, adding agency officials are concerned that disclosure "might have significant unforeseen consequences."

"Most notably, it could chill the willingness of current and future [Science Advisory Board and Clean Air Scientific Advisory Committee] members to serve, thereby restricting the EPA’s ability to utilize the services of experts on an advisory basis," Minoli said.

Chaffetz, who has since retired, had sought the records in April 2016, on the grounds the oversight committee wanted to understand "the reliability of EPA’s conflicts assessment" for members of the two panels (Greenwire, April 12, 2016). EPA released Minoli’s reply yesterday in response to a September 2016 Freedom of Information Act request by E&E News.

In the letter, Minoli offered to keep working to address the committee’s needs. He could not be reached for comment this morning on whether any kind of accommodation was later found. Also signing on to Chaffetz’s request was then-Rep. Cynthia Lummis (R-Wyo.), who at the time chaired the oversight panel’s Subcommittee on the Interior and has also since retired.

The Science Advisory Board (SAB) and the Clean Air Scientific Advisory Committee (CASAC) rank among the most influential of EPA’s almost two dozen federal advisory committees. The board advises the EPA administrator and other officials on an array of topics upon request. The CASAC furnishes outside expertise during regularly required reviews of the air quality standards for ozone, particulate matter and other common pollutants. During the Obama administration, the two panels had more than 50 members between them, mostly drawn from academia.

Both were repeatedly targeted by congressional Republicans on the grounds that many of their members received EPA grants and thus were allegedly biased in favor of the agency’s perspectives. Last October, EPA chief Scott Pruitt barred funding recipients from serving on agency advisory panels. As a result, at least a dozen people have been forced off the CASAC, the SAB and various SAB subcommittees, according to figures obtained from EPA and other sources.

The new policy is the subject of three separate lawsuits. Since many of Pruitt’s appointees have ties to industries regulated by EPA, Democratic lawmakers are now the ones voicing conflict-of-interest concerns.

As part of a sweeping records request to EPA early this month, Sens. Tom Carper (D-Del.) and Sheldon Whitehouse (D-R.I.) sought the financial disclosure forms for all 2017 appointees to agency advisory panels (Greenwire, Jan. 9). Carper is the ranking member on the Senate Environment and Public Works Committee; Whitehouse holds the comparable title on its Subcommittee on Clean Air and Nuclear Safety.

As of publication time, a Carper spokeswoman had not replied to an email sent late yesterday asking whether EPA has responded to the request. EPA press aides did not reply to a separate query asking whether the agency’s position on release of advisory members’ financial disclosure remains the same as in 2016.