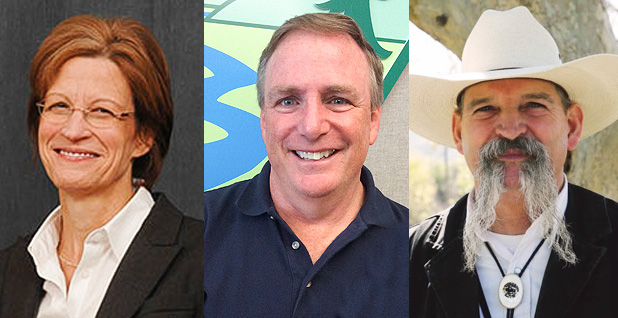 The Bureau of Land Management is once again reshaping senior leadership, as BLM’s second-in-command is set to retire as early as the end of the month, the bureau’s fire and aviation program director is moving to the Idaho state office, and two new state directors are close to being finalized in Alaska and Montana-Dakotas.

Margaret Schneider, who in August was appointed acting deputy director of operations, is set to retire, though a firm date has not been set due to the looming threat of another partial federal government shutdown. The deputy director of operations handles the day-to-day operations of the bureau and its nearly 10,000 employees who manage 250 million acres of public lands under its control.

A replacement for Schneider has been submitted to the Interior Department’s executive review board, which must approve all Senior Executive Service position hires. A source who asked not to be identified provided a name to E&E News that could not be independently verified in time for publication.

A BLM spokesperson declined to confirm the moves to E&E News. "We have no announcements at this time."

But they were outlined by Brian Steed, BLM’s deputy director of policy and programs, during a conference call late yesterday with members of the bureau’s executive leadership team, according to sources who asked not to be identified.

Among the major moves Steed discussed with the leadership team:

The new director of BLM’s Alaska state office, which manages about 70 million acres of federal lands, will replace Ted Murphy, who has been acting state director in Alaska since September 2018. Murphy, who previously had served as associate state director, is expected to transition back to that position.

Ruhs will replace Peter Ditton, who has served as acting state director since January 2018, when then-Director Tim Murphy retired.

"It is now time for me to return to my ‘day job’ as the Associate State Director," Ditton wrote in an email yesterday to BLM Idaho staff, adding that Ruhs may not take over for "4-6 weeks."

"John is an outstanding leader and experienced BLM manager, with a vast and deep background that will serve BLM Idaho well," Ditton wrote. "I know that John and I will work well together, and expect we will hit our stride quickly."

The latest moves are part of a trend of leadership fluctuation at BLM ongoing since last summer when Mike Nedd, at the time BLM’s acting deputy director of operations, was transferred back to assistant director of energy, minerals and realty management — a position he held prior to then-Interior Secretary Ryan Zinke naming him acting BLM director in March 2017 (Greenwire, June 11, 2018).

Richard Cardinale, the Interior Department’s director of the business operations division in the Office of the Chief Information Officer, was then moved into BLM’s deputy director of operations position to replace Nedd on an acting basis.

Schneider at the time was the bureau’s assistant director of business, fiscal and information resources management and replaced Cardinale as director of operations in August.

Now Schneider is retiring after a more-than-30-year career in federal government.

The appointment of permanent state directors in Alaska, Montana-Dakotas and Idaho, and the retirement of McAlear in the Oregon-Washington state office, continues the ongoing rotation of leadership at BLM state offices since at least October.

Steed announced to the agency’s executive leadership team last October that McAlear, who at the time was assistant director of BLM’s National Conservation Lands and Community Partnerships in Washington, D.C., would replace Jamie Connell as director of the Oregon-Washington state office (Greenwire, Oct. 12, 2018).

Connell in November formally took over as director of BLM Colorado’s state office, which manages 8.3 million acres of federal lands in the Centennial State. She replaced Greg Shoop, the acting director.

Connell became the first permanent BLM Colorado state director since Ruth Welch was transferred to the Bureau of Reclamation in 2017 as part of a major staff shakeup in the opening months of Zinke’s tenure that also included removing the permanent state directors in Alaska and New Mexico (Greenwire, June 27, 2017).

Jerry Perez, who had led the BLM California office since January 2016, also left in October to become supervisor of the Angeles National Forest in Southern California. Joe Stout, the associate state director, took over for Perez as acting director of the office overseeing 15.2 million acres of bureau land in the Golden State, and 1.6 million acres in northwest Nevada (Greenwire, Oct. 16, 2018).

The changes come at a time of uncertainty for some at BLM.

The Interior Department is still working on a plan originally driven by Zinke — but supported by acting Interior Secretary David Bernhardt — to move the agency’s headquarters out of Washington to a city in the West.

Sources at various times have listed Grand Junction, Colo., and Salt Lake City as the top contenders, although Denver; Albuquerque, N.M.; Ogden, Utah; and other cities remain under consideration.

Interior, and BLM in particular, has taken flak for having most of its state office directors on an acting basis (Greenwire, Jan. 31).

President Trump has yet to nominate anyone as BLM director, which requires Senate confirmation.

But it will leave a vacancy at NIFC when Ruhs leaves to head the BLM Idaho state office.

BLM has not said who will replace Ruhs at NIFC — a partnership among BLM, the National Park Service, the Bureau of Indian Affairs, and the Fish and Wildlife Service, along with the Agriculture Department’s Forest Service, that oversees fire suppression and prevention activities across hundreds of millions of acres of federal lands.

Prior to that, Ruhs served a successful stint as BLM Nevada state director, where he drew widespread praise for helping defuse tensions between the bureau and ranchers following the Cliven Bundy standoff five years ago.

Amodei, along with some congressional Democrats, has been critical of BLM’s acting state directors, who until recently numbered seven out of 12 state offices.

Amodei was quoted by the Reno Gazette-Journal at the Churchill County GOP Lincoln Day Dinner in Nevada on St. Patrick’s Day last year as saying he sent an angry text to Zinke regarding Ruhs’ transfer (E&E News PM, March 26, 2018).

"Nevada has suffered through a decade of shit BLM leadership," Amodei was quoted at the dinner, reading from a text message he said he had sent Zinke. "To put a strong, successful leader in there for a net 18 months and then, for any reason, ship him, or let him leave to a position in Boise, is absolutely tone deaf."