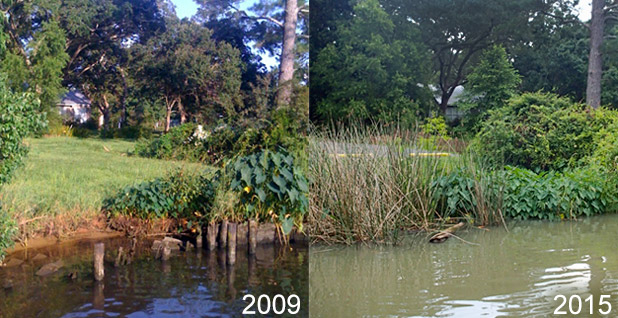 A "living shoreline" project in Magnolia Springs, Ala. A partially removed bulkhead (2009) was replaced with native vegetation on this estuary to stabilize the shoreline (2015). Photo courtesy of Weeks Bay National Estuarine Research Reserve.

A federal effort to promote natural defenses against shoreline erosion is getting mixed reviews.

The Army Corps of Engineers’ proposal is aimed at easing permitting burdens for "living shorelines" — the use of wetland plants, submerged aquatic vegetation, oyster reefs, sand and rolls of biodegradable fiber instead of walls and boulders to battle erosion.

Among those expressing disapproval: the Lake Mitchell Home Owners and Boat Owners (HOBO) Association in Clanton, Ala., near the 170-megawatt hydroelectric dam operated by Alabama Power.

"I just had my first grandchild," Steve Miles, HOBO’s president, said in an interview. "And I don’t want her swimming in trash and snakes."

At least 18 residents of Lake Mitchell, Logan Martin and other reservoirs — as well as Alabama Power’s owner, Southern Co. — have sent comments to the Army Corps to restrict its recent proposal to ease permitting burdens for creating living shorelines.

The corps’ proposal is part of the review of nationwide permits the agency must conduct every five years under the Clean Water Act and the Rivers and Harbors Act. Nationwide permits offer property owners a faster route to corps approval where environmental impacts are seen as light (Greenwire, May 23).

This is the first time the corps has floated a nationwide permit for living shorelines.

Living shorelines are intended to replace bulkheads, revetment, sea walls and other man-made structures that might increase the rate of coastal erosion and reduce habitat for estuarine species, according to the National Oceanic and Atmospheric Administration.

Alabama Gov. Robert Bentley (R) has set aside $5 million of the restoration money from the Deepwater Horizon oil spill settlement for a 1.6-mile living shoreline project near Mobile.

But on Lake Mitchell, many residents have sea walls to protect their property from the rhythmic waves created by motorboats and water scooters.

Those waves are too intense for living shorelines, Lake Mitchell property owners James and Ferne McClintock said in comments to the corps.

James McClintock, a marine biology professor at the University of Alabama, Birmingham, solicited comments from his academic colleagues on the matter.

"Man-made lakes that were created for hydro-electric power and for human recreation do not have a natural shoreline. The shoreline was man-made from the beginning," they wrote.

The proposal even triggered a comment from Duke University geologist Orrin Pilkey, whose 2012 review of "alternative" shoreline projects cast doubt on their effectiveness.

"Many ‘living shorelines’ are nothing more than armored shorelines dressed up with a different name," Pilkey wrote. "Natural shorelines do not need salvation and they will respond better to the rising sea level."

By contrast, community groups and individuals along Alabama’s Gulf Coast — more than 200 miles away from Lake Mitchell — have vouched support for streamlining the permitting process for building the structures.

"Living shorelines are the type of environmentalism that Alabama’s more-conservative coastal community should embrace and expand," wrote the R Street Institute’s state programs director, Cameron Smith, in a recent op-ed. "This isn’t some leftist environmental boondoggle."

Living shorelines create a natural transition — or "ecotone" — between land and water habitats, said Shannon Cunniff, director of coastal resilience for the Environmental Defense Fund. A nationwide permit would allow these projects the same quick permitting advantages of small bulkheads.

On the coast, "they’re very popular, and they’ve proven in most cases to be very successful," he said.

But Pew Charitable Trusts Director Laura Lightbody said the homeowners are misguided in thinking that the Army Corps’ proposal would mandate them to build living shorelines.

"It does not require homeowners to pursue a particular approach," said Lightbody, who directs Pew’s flood-prepared communities project.

The line between structural erosion-control measures and nonstructural living shorelines is not black or white, or rather "green or gray," as Lightbody puts it. There are plenty of hybrid approaches in the middle.

Lake Mitchell’s Miles has contacted Alabama Republican Sen. Jeff Sessions and Rep. Gary Palmer, asking them to pressure the corps to restrict the living shoreline permits to coastlines. His pressure-treated wood seawall has withstood years of pounding. He wants it to stay that way.

"That’s just part of life living on the water," said Miles. Building living shorelines "is a totally different way of life," he said.