Agent in charge at 2014 Bundy standoff gone from BLM 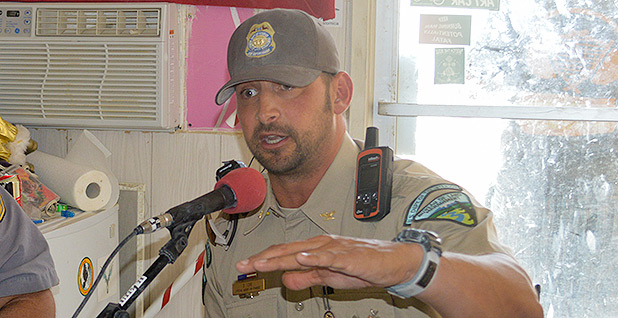 A senior Bureau of Land Management law enforcement official who was found to have violated federal ethics rules at the Burning Man festival and to have mishandled criminal evidence in a separate case is no longer with the agency.

The Associated Press first reported that Love is no longer with the agency.

It’s not clear whether Love quit, was fired or negotiated a settlement to leave the agency. It’s also not clear when Love left BLM.

BLM spokeswoman Megan Crandall confirmed in an email that Love "is no longer an employee" at the agency but said she could say little else due to privacy law.

"I am not able to provide additional details," Crandall said. "I cannot confirm the circumstances of the change in status or the timing of that change. Only that he is no longer an employee."

She added, "It’s possible that the [Interior Department] might have more to offer in the coming weeks, but I don’t at this point due to privacy law."

Lisa Kleine, a Washington-based attorney who sources said is representing Love, could not be reached for comment.

But pressure has been building on BLM and Interior to take action after an inspector general’s report released last month found Love removed ancient moqui marbles from evidence storage and gave them away "as gifts to several people" (E&E News PM, Aug. 24).

The moqui marbles — compacted sandstone balls millions of years old that are primarily found in Utah and parts of Arizona, Colorado and Nevada — had been "taken illegally" by poachers from an undisclosed park site and later seized by BLM as part of a criminal investigation into their theft, the inspector general’s report says.

The report quoted a BLM state ranger who told investigators that Love was giving the marbles "out like candy" to employees, and even to a contractor working on a new evidence room and offices.

The inspector general’s report did not name Love. But House Natural Resources Chairman Rob Bishop (R-Utah) confirmed in a statement that Love was the focus of the investigation after requesting that the inspector general send his committee an unredacted copy of the report.

A BLM spokeswoman told E&E News at the time the report was released last month that Love was still employed at the agency.

Bishop issued a statement after the report was released saying, "I expect Interior to hold Dan Love accountable."

In addition to the moqui marble investigation, Love was the target of an inspector general probe that earlier this year that found he violated federal ethics laws by abusing his position to obtain special access to the Burning Man festival for his family and pressured subordinates to hire his friend (E&E News PM, Jan. 30).

Though the inspector general’s report in January did not identify the supervisory agent at issue, E&E News later confirmed it was Love (Greenwire, Feb. 2).

Among other things, the inspector general found that during the investigation, the supervisor later tried to influence his employees and learn details of their interviews with investigators.

He told one contracting officer that "if you’re not on my ship you’re going to sink … so I suggest you get on my ship," the inspector general report said.

And a BLM state ranger "said that the Supervisory Agent told him that saying ‘I don’t recall’ was a valid answer," the report said. The same ranger said the supervisor called him after he spoke with the inspector general and asked, "Do I still have a job or did you get me fired?"

Love, who oversaw security during the Bundy cattle roundup that ended in the armed standoff with ranchers and militia members, stood near the gun-wielding crowd.

Federal prosecutors have not used Love’s testimony in their mostly unsuccessful attempts to prosecute those involved in the armed standoff, in large part, sources said, because of the inspector general’s investigations.