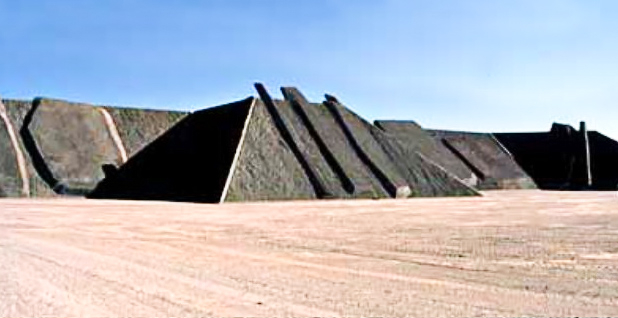 A conservation easement signed today on Capitol Hill will protect a massive sculpture within the Basin and Range National Monument in Nevada, a move that outgoing Senate Minority Leader Harry Reid (D-Nev.) has long pushed.

Reid gathered with federal and museum officials for the signing of a conservation easement that fully incorporates artist Michael Heizer’s "City" into the 700,000-acre monument, which President Obama designated last year.

The easement is directed toward protecting the art installation. Specifically, the agreement allows the Los Angeles County Museum of Art and Triple Aught Foundation to grant the Bureau of Land Management specific rights to 1,300 acres of private land in and around the art installation in eastern Nevada, which is surrounded by the federal monument. The foundation will still be responsible for paying taxes on the land and maintenance.

Standing quietly beside Reid in a leather jacket with a scruff of silver hair, Heizer recalled how he met the senator decades ago and the two shared stories of bonding over open spaces.

The project appears as a series of carved walls creating a controlled space surrounded by trenches through which observers can hike.

Reid’s lengthy fight to safeguard the art installation has run afoul of supporters of the now-defunct Yucca Mountain nuclear waste repository in Nevada, a project the senator has vowed to kill. Reid, indeed, succeeded in holding off the repository’s operation for almost a decade, a move that some say President-elect Donald Trump is poised to reverse (E&E Daily, July 14, 2015).

A native of the Silver State, Reid has said his fight for the designation has more to do with a love of art, not his opposition to Yucca Mountain. The senator added that when he first arrived in Congress, there was a mere 70,000 acres of wilderness. As he prepares to leave, there are more than 4 million acres of designated lands.

Reid today called Heizer a visionary and said the art installation — located in the rural Lincoln County near the border with Nye County — would be there for eternity.

Reid also predicted that Trump won’t be able to undo the protections for "City."

"I think we protected ourselves legally," Reid said. "Trump’s got more stuff to worry about than trying to take away the ‘City’ in the Basin Range."

Reid said Obama has used the Antiquities Act many times to protect large swaths of land and noted that past presidents including Theodore Roosevelt have taken similar steps.

"I think there’s general agreement Republicans will try to mess with the Antiquities Act somewhat," Reid said. "But let’s hope that under the rules of the Senate and goodwill of people who care about the environment, that can be stopped."

"What we’ve done already is done, and we hope that before Jan. 20, maybe some more will be done."