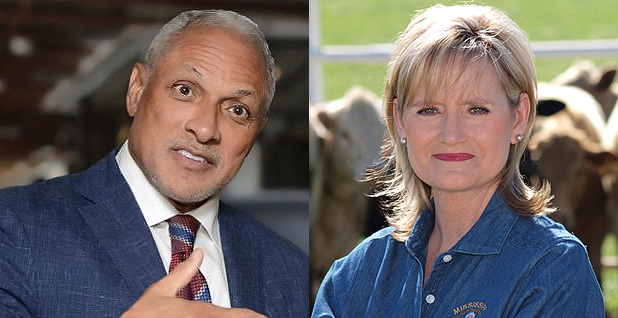 Tomorrow’s runoff in Mississippi’s special U.S. Senate election pits two agricultural policy heavyweights against each other as the 2018 farm bill and the Trump administration’s trade battles shape the political landscape in farm country.

Both have conservative credentials. Espy appeared in ads for the National Rifle Association as a member of Congress and oversaw a budget-cutting reorganization of the Department of Agriculture during the Clinton administration. Hyde-Smith — a registered Democrat until 2010 — has aligned herself with President Trump in an effort to hold on to the seat. She’s favored to win.

Both have long-standing connections to agriculture. Hyde-Smith is part of a cattle-raising family in Brookhaven, Miss. Espy, a native of Yazoo City, Miss., authored legislation creating National Catfish Day, recognizing a major industry in his home state.

The race has been remarkably close for a normally safe Republican state. In a crowded special election earlier this month, Espy came within a percentage point of Hyde-Smith, who was also running against other Republicans. That race forced the runoff.

In the campaign, agriculture has taken a back seat to controversies such as Hyde-Smith’s recent joke about public hangings — which critics took as racially insensitive — and Espy’s troubles during the Clinton administration, when he resigned under accusations that he’d given favors to industry players. He was indicted in 1997 and acquitted of felony charges the next year.

But the winner will play a hand in agricultural issues vital to the state.

Agriculture is Mississippi’s top industry, constituting 29 percent of the state’s workforce and generating $7.6 billion for the economy. As much as 29 percent of the state’s budget can be attributed to farm production, according to Hyde-Smith’s campaign. Poultry and eggs, timber and soybeans lead the way, each generating more than $1 billion in annual sales, according to the state Department of Agriculture and Commerce.

"It’s a very important issue because it’s so much of the state’s budget. We have to make sure farmers and ranchers have what they need," said Melissa Scallan, a Hyde-Smith campaign spokeswoman.

Hyde-Smith has won praise from the Mississippi Farm Bureau and received a "Friend of Farm Bureau" award. The group, which is the major lobbying outfit for agriculture in the state, doesn’t endorse political candidates. Representatives didn’t return messages seeking comment on the race.

Hyde-Smith also serves on the Senate Agriculture Committee, which spent much of this year working on the 2018 farm bill.

While farm policy hasn’t generated many headlines in the race, agriculture dominates Hyde-Smith’s campaign financially. It’s the top contributor overall, and one segment of agriculture — crop production and basic processing — accounts for $158,487 in campaign contributions, according to the Center for Responsive Politics, which compiles data from the Federal Election Commission.

Political action committees tied to agriculture have poured money into Hyde-Smith’s campaign, including more than $200,000 from agribusiness overall. Contributors include PACs connected to the Alabama Farmers Federation, giving $10,000, and the Farm Credit Council, giving $7,500. Money tied to forestry, tobacco, dairy, poultry and livestock helped her raise more than $3.5 million this year, according to the CRP.

Espy, as a challenger, has relied more heavily on individual contributors, who accounted for more than 80 percent of the $2.4 million he’s raised. PACs account for 11 percent of Espy’s campaign war chest, compared with nearly 31 percent of Hyde-Smith’s.

If Hyde-Smith wins and remains on the Agriculture Committee, she’ll play a role in the implementation of the 2018 farm bill — which may soon become part of a session-ending spending bill — and in the likely crafting of the next farm bill.

But another issue — trade policy — is proving more difficult in farm country. Trump’s tariffs and the resulting trade spats have sparked criticism from farm groups. Trade, as much as or more than farm programs at home, spells success or failure for producers, they say.

The senator is stepping lightly on that issue.

"She understands that farmers cannot take those tariffs for a long time," Scallan said. "She has spoken to the president about this. They can take it for a little while."

Espy, sensing a political soft spot, isn’t holding back on farm trade. After a debate Tuesday in which Hyde-Smith didn’t attack the tariffs, Espy met with farmers, and his campaign issued a news release.

"Our farmers know I will always put Mississippi first, no matter what a political party or person says. Right now, that means speaking out about these tariffs, which are so harmful to our state," Espy said. "We need to find a compromise that works for everyone, and if I’m elected to U.S. Senate, I will work with anyone and everyone to find the right way forward for our farmers."