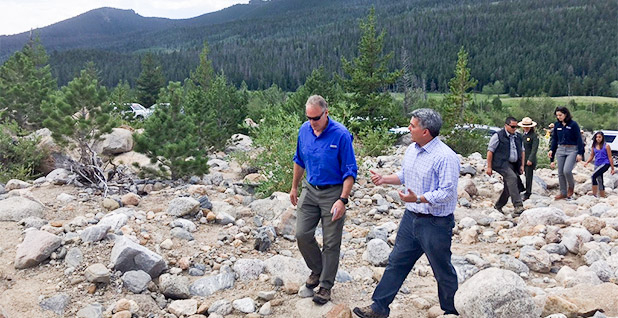 Rank-and-file members of the American Geophysical Union are protesting the group’s decision to give Sen. Cory Gardner (R-Colo.) an award for his record on climate change and the environment.

Protesters within the group yesterday circulated a letter that criticized AGU brass for celebrating a lawmaker who voted in 2015 against a resolution that declared "human activity significantly contributes to climate change." Opponents also noted Gardner’s lifetime score of 10 percent with the League of Conservation Voters.

"Americans deserve leaders who recognize the value of science as a critical ingredient to our nation’s health and prosperity, and there are many such leaders — Republicans and Democrats alike — who deserve the honor of an AGU Presidential Citation," wrote the letter’s authors. "Senator Gardner is not one of them."

As of 6 p.m. yesterday, dozens of supporters had added their names to the list. Organizers asked that signatories be limited to members of the AGU, though E&E News was unable to verify the affiliations of everyone on the list.

Julien Emile-Geay, an associate professor of earth sciences at the University of Southern California, was the first name on the letter.

An AGU member since 2005, Emile-Geay said he organized the protest with Kim Cobb of the Georgia Institute of Technology. He said his own personal goal would be to have AGU rescind the award to Gardner, though the letter does not explicitly state that.

"The AGU likes to brand itself as a bottom-up organization and in many instances claims to speak for geoscientists — and I think it does successfully on a number of issues — but this is one where I think the process went astray," he said.

The AGU describes its mission as "dedicated to the furtherance of the Earth and space sciences, and to communicating our science’s ability to benefit humanity." It boasts 60,000 members in 139 countries.

AGU leaders have responded to the complaints in a couple of ways.

In a Dec. 2 post, they apologized for failing to explain why Gardner was selected for the award, as well as their shortcomings in trying to "address the concerns some of you have over Senator Gardner’s selection."

"While these were failures in process and not intentional, the result was the same: confusion and serious concern about this choice," wrote AGU President Eric Davidson and Executive Director Christine McEntee. "For that we are deeply sorry."

In explaining the rationale for the award, AGU cited Gardner’s work to pass the American Innovation and Competitiveness Act of 2017.

The legislation "strengthens our nation’s STEM education pipeline, increases the number of women and underrepresented minorities within STEM fields, and sets robust authorization levels for the National Science Foundation, while avoiding Congressional interference in the allocation to NSF’s directorates, including Geosciences," they wrote.

"During such politically contentious times as these, when progress is dead-locked by deep divisions, the bipartisan approach taken to pass this important legislation is notable," they added.

Gardner’s office also defended his record and receipt of the award.

"Senator Gardner believes human activity is a driver of climate change and he supports research and additional congressional initiatives to help find a way that we can responsibly address it," wrote spokesman Casey Contres in an email.

In respect to the 2015 vote, Contres argued: "That was not a serious substantive amendment and would not have done a single thing to actually address climate change."

The controversy comes ahead of AGU’s fall meeting next week in Washington, D.C. It also follows past concerns about sponsorship the group has received from fossil fuel companies such as Exxon Mobil Corp.

"From lowly grad students to many of the most famous scholars in the world, climate experts are fed up with citadels of science like AGU refusing to stand up to climate denial," wrote Geoffrey Supran, an AGU member who has challenged the group to dissociate itself from Exxon Mobil. "It is a discredit to science and a disservice to society."

He added: "AGU’s decision to award a Presidential Citation to a Koch-funded, climate denying-politician is not an isolated event. It is part of a systemic failure of leadership."

The oil and gas industry has been the second-largest contributor to Gardner over the course of his congressional career, according to the Center for Responsive Politics. First was "retired."

Koch Industries, led for years by conservative power brokers Charles and David Koch, was the fifth-largest contributor to Gardner’s political career between 2013 and 2018, according to CRP. Gardner attended a 2017 retreat hosted by the Koch network at which officials blasted Republican efforts to undo the Affordable Care Act as not conservative enough, according to The Denver Post.

There’s a political dimension to the AGU fight, too.

Gardner is up for re-election in 2020, and the first-term Republican likely will have to present a moderate record to Colorado voters, given the state’s broad support of Democrats in the 2018 election. The state has voted for the Democratic presidential nominee in the last three White House contests.