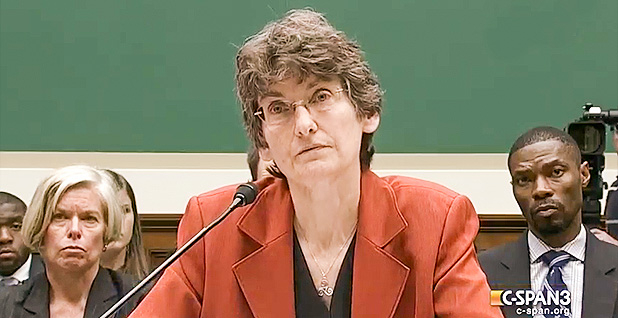 On that September day, McCabe and her EPA colleagues sat on a hard bench in a high-ceilinged Washington courtroom as 10 judges grilled government, industry, state and environmental attorneys for nearly seven hours.

At stake in the U.S. Court of Appeals for the District of Columbia Circuit was the rule that sprang from McCabe’s Office of Air and Radiation.

"It was absolutely amazing," McCabe said. "It’s just so remarkable to see the most important legal minds in our country focused on this and understanding it so well."

McCabe has led the Office of Air and Radiation since 2013 in an acting capacity after serving as its No. 2 for four years under now-Administrator Gina McCarthy. She recently spoke with E&E News about her plans to return to Indiana, where she worked for the state environmental agency for a dozen years and where her husband lives, at the end of the Obama administration.

But she did offer advice for the next leader of the air office: Get to know EPA career and regional staffers, spend time in communities, and get to understand how EPA and state partners work together.

"I would say to my successor that this is the most amazing job that you’ll ever be lucky enough to have," she said.

Under President Obama, McCabe said, EPA turned the conversation on climate change "from speculating about whether there is climate to moving forward to doing things about it."

The Clean Power Plan, which has been at the forefront of EPA’s climate work in the last few years, would require states to develop and put in place plans to reduce carbon dioxide emissions from existing power plants. The rule aims to reduce heat-trapping emissions of carbon dioxide by 32 percent from 2005 levels by 2030.

McCabe has been one the rule’s biggest cheerleaders as 27 states and dozens of industry entities have sought to strike it down in the U.S. Court of Appeals for the District of Columbia Circuit. In a surprising move, the Supreme Court last February stayed the rule until the legal challenges are resolved.

McCabe had attended Supreme Court arguments in the past, but the Sept. 27 Clean Power Plan arguments were her first time sitting in at the appeals court.

"The D.C. Circuit is so familiar and smart about the Clean Air Act, and you see that from the judges," she said. "They hear so many of the cases that involve EPA rules — they’re brilliant. They ask incredibly good questions."

No matter what the D.C. Circuit does, the rule is in peril. The incoming Trump administration is likely to take steps to withdraw it.

But McCabe said she’s confident that EPA stayed within its authority under the Clean Air Act and had a robust record to support the rule.

Along with the Clean Power Plan, McCabe ticked off the Clean Air Act greenhouse gas endangerment finding and vehicle emissions rules as the Obama EPA’s most significant climate accomplishments.

McCabe also listed EPA’s rules limiting hazardous air pollutants from power plants and lowering pollution that crosses state borders as top accomplishments. And she touted that emissions of criteria air pollutants such as ozone and particulate matter have tracked downward during the Obama administration.

EPA finalized a lower air standard for ozone last year after the White House punted on lowering the standard in 2011, citing economic reasons. Asked whether the delay, on which environmentalists heaped scorn, was worth it, McCabe said, "People make the decisions that they think are appropriate at the time."

She added, "I’m proud of the ozone rule that we ended up finalizing. I think what’s important is where we ended up here."

But McCabe said she wished the air office could have done more on environmental justice and air toxics issues before the end of the Obama administration.

"Toxic air pollution is a very local issue. I think that’s one thing I would say I wish that we had more time to work on," she said.

For McCabe, coming to EPA in 2009 was a kind of homecoming. McCabe was born and raised in Washington, leaving to attend Harvard College and then Harvard Law School.

"I haven’t taken full advantage of it while I’ve been here because I work a lot, but I’ve enjoyed being back here," she said. "I think it’s hard to be in D.C. and not feel really great about this country."

McCabe said the city has changed a lot since her high school graduation in 1976. The biggest change has been the Washington Metro, which started operating the year McCabe left high school. McCabe takes what has become a troubled subway system to EPA headquarters.

"That has just made a huge change in the city," she said. "You can tell that when you fly in and you see the little mini cities around every subway stop."

After she graduated with her law degree in 1983, McCabe’s first job was in the environmental division at the Massachusetts attorney general’s office.

It was there — by chance — that she became interested in the Clean Air Act and air pollution issues.

"I got the job, as many young lawyers do, because there was an opening and I applied for it and I got it," she said. "And I ended up working on some air cases and really, really loved them."

McCabe also served in Massachusetts as assistant secretary for environmental impact review before moving to Indiana, her husband’s home state. There, she spent 12 years at Indiana’s Department of Environmental Management in various positions, including chief of the air programs branch. She was charged with developing the state’s implementation plans for complying with federal ozone standards and carrying out the state’s air permitting program.

Beginning in 2009, McCabe served as principal deputy to McCarthy, who was then assistant administrator for the EPA Office of Air and Radiation. When McCarthy resigned to become EPA administrator in the summer of 2013, she asked McCabe to step in as acting air chief.

"I love working for her. She’s an incredible leader, an incredible person," McCabe said of McCarthy. "I think when you see her in public — that’s the way she is. She is a real person. She cares deeply about everybody that she works with."

Working for IDEM prepared McCabe for dealing with the Clean Air Act at the federal level. But dealing with Congress was something she had to learn on the job at EPA. McCabe has frequently been called to Capitol Hill to defend the agency’s air regulations.

"That was something that I really didn’t have experience in coming into this position," McCabe said. "And it’s going to sound kind of Pollyanna, and is, I guess, but it was an absolute honor every time I was invited to come talk to Congress."

A July hearing of the House Energy and Commerce Subcommittee on Energy and Power turned into a partisan brawl after a Republican called EPA and McCabe "un-American" for the agency’s air and climate regulations.

At that same hearing, another Republican, Rep. Markwayne Mullin of Oklahoma, accused McCabe of making false claims and working against industry throughout her career.

Alone at the witness table, McCabe said, "That is absolutely not true, congressman."

"My goal was to always answer in as straightforward a manner as possible," McCabe told E&E News, "and be very clear about the agency’s position and the bases for the decision that we made."

Although President Obama formally tapped McCabe to serve as EPA air chief in December 2013, the Senate never voted on her nomination. She’s had the "acting" label in front of her title for her entire tenure.

McCabe said she "hardly ever" thought about the fact that she was never confirmed.

"I certainly never felt any indication from anybody I worked with here that it mattered that I wasn’t confirmed," she said.

While her schedule allows her little free time, McCabe said she tries to work out at the gym every day. She also relaxes by reading and walking Wiley, her cocker spaniel. On weekends, McCabe travels to Indiana to spend time with family.

Her husband is an attorney in Indianapolis, and she has two children: a 28-year-old daughter who is a public school teacher and a 26-year-old son who just graduated from law school.

She hasn’t thought much about what’s next after EPA. But she knows she’ll return to Indiana.

"I expect I’ll take some time and figure out what I’m doing," she said.