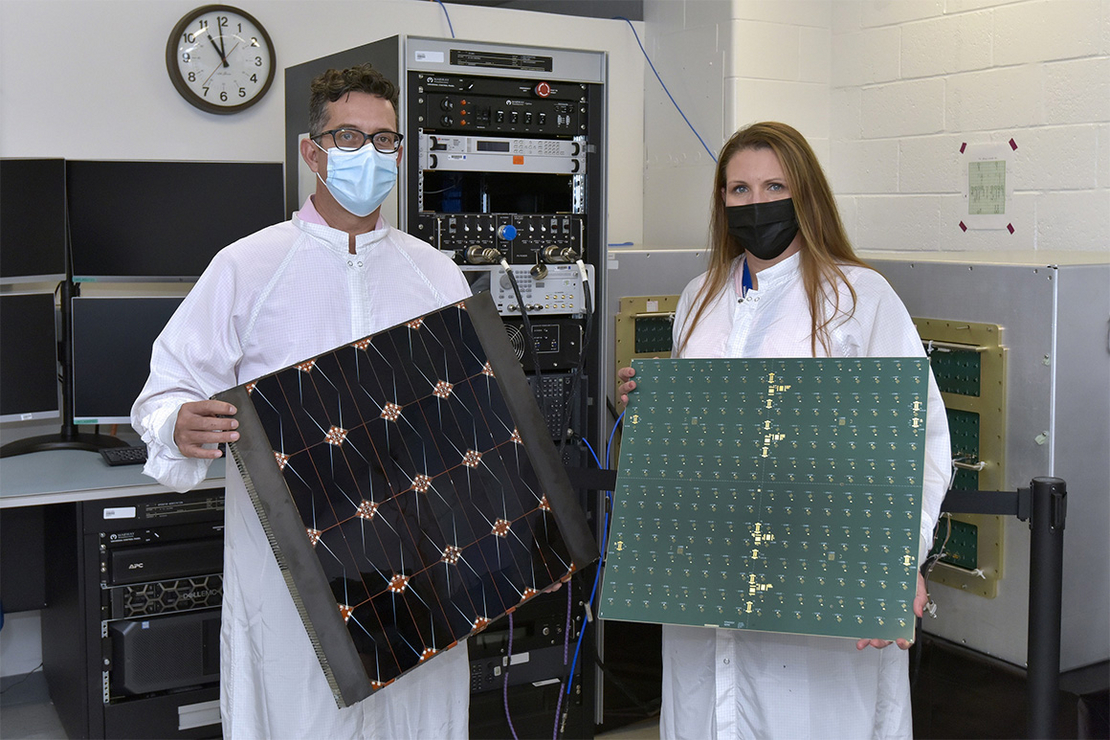 Project managers James Winter of the Air Force Research Laboratory and Tara Theret of Northrop Grumman hold models of the photovoltaic and radio frequency sides of the "sandwich tile" used in a demonstration of new technology to harness solar power from space. Northrop Grumman

Air Force researchers have made a new breakthrough in the effort to harness solar energy from space, potentially setting the foundation for a science-fiction like renewable power source for military operations and beyond.

The Arachne mission, headed by the Air Force Research Laboratory and Northrop Grumman Corp., examines the possibility of harnessing solar energy through space-based panels and then "beaming" the power back to Earth through wireless technology. The program envisions a future in which military forces and eventually the public will have access to a practically endless supply of solar energy, at any time of day or night, by simply setting up an antenna.

The program began in 2018, but the concept of space-based solar power has been around since the 1950s. Its practicality, in both technology and cost, has been debated and often doubted by both the private and public energy sectors (Energywire, Aug. 27).

But program leaders said that recent tests of a solar panel prototype may have set a proven foundation for the future. The prototype, called a "sandwich tile" by researchers, was able to harness intense solar radiation found in outer space and then convert it into radio frequency energy that could be beamed back to Earth.

“The successful conversion of sunlight into RF energy in a lightweight and scalable architecture is a significant step forward in delivering the technology building blocks to achieve the Arachne mission,” Jay Patel, vice president for the remote sensing programs business unit at Northrop Grumman, said in a press release. “We are helping to deliver a pioneering capability that can provide a strategic advantage to our forces around the globe.”

Researchers say the technology is the first to be scalable enough to be useful for a large space-based solar operation. At the moment, the prototype can be a building block for a square-meter panel of tiles.

Eventually, the Arachne mission intends to launch an experimental satellite in space to test different aspects of power collection, conversion and transmission. The launch was originally intended for 2024 but has been delayed to 2025.