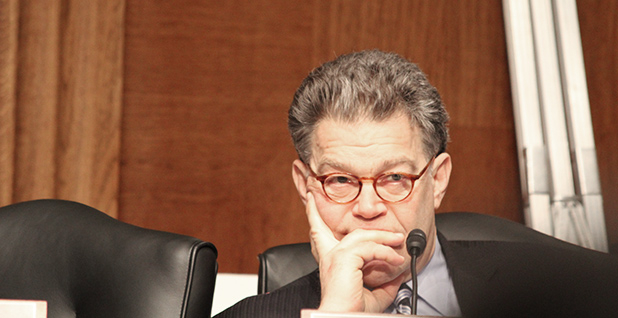 The Senate’s funny guy is not joking around about climate change.

The highlight of an hourslong budget hearing in June came when Sen. Al Franken (D-Minn.) circled figuratively around Energy Secretary Rick Perry, who claimed incorrectly that humans are not the primary control knob for rising temperatures. Perry appeared frustrated and then asked what’s wrong with being called a climate skeptic. He also voiced support for openly debating the scientific underpinnings of climate change.

Franken patiently corrected him on the consensus of scientists, pointing out: "That’s exactly how science works, including climate science. Researchers collect data and make arguments."

It went viral. Who would have guessed that a hearing tailor-made for C-SPAN would reach the masses? Maybe Franken did. NowThis News, a liberal outlet specialized for phones, packaged the moment into a two-minute highlight reel that made Perry seem clueless compared with Franken’s wizardry. It said the former comedian "shut down his argument perfectly." It’s been viewed 11 million times.

That’s Franken in a nutshell.

He’s not the Senate’s loudest advocate for climate change, nor the longest-tenured. Yet he might be the most noticeable. He has an ability to reach a diverse audience that transcends political boundaries. At 66, he’s older than Sens. Sheldon Whitehouse (D-R.I.) and Brian Schatz (D-Hawaii), two lawmakers who try to distinguish themselves as climate hawks. But neither has Franken’s celebrity appeal or his Twitter followers (Franken has 530,000; Whitehouse and Schatz have 207,000 combined).

His approach to climate advocacy doesn’t depend on floor lectures or press conferences. He uses wry sarcasm in the heat of debate, a skill honed on "Saturday Night Live," and a precise mastery of scientific facts.

On Capitol Hill, Franken employs the Socratic method as a weapon in the climate wars, asking leading questions that defang opponents without the tension other Democratic lawmakers bring to the issue. When Trump appointees claim ignorance of basic climate science, Franken helps them dig a rhetorical hole. At the end of the exchange, as his political opponents try to make it seem as if they’re just honest skeptics waiting for more information, Franken has a knack for getting them to admit they are rejecting scientific facts.

It has earned him a wide audience, in part because his star power affords him access to other celebrities. The five-minute segments of his video series with comedian David Letterman, called "Boiling the Frog," have been viewed more than 12 million times in the last four months.

Other lawmakers try to wield as much influence. Senate Democrats have used confirmation hearings to sound off on Trump appointees at U.S. EPA, the Interior Department and the Department of Energy who reject, deny or misrepresent basic climate science.

But it’s unclear that they’re reaching voters, let alone colleagues, who are skeptical of mainstream science, according to communications experts. Whitehouse of Rhode Island has spoken about climate on the Senate floor more than 180 times. He often uses charts and photos. Sen. Bernie Sanders (I-Vt.) made climate change a key issue in the presidential primaries, and he angrily skewered Scott Pruitt over his denial of climate change in a confirmation hearing for Pruitt’s nomination as EPA administrator.

Franken might be different. His potential to reach a major audience could appeal to people across political parties, said Anthony Leiserowitz, director of the Yale Project on Climate Change Communication. Whitehouse’s discussion of the issue on the Senate floor brings a gravitas to the issue, but it doesn’t bring in a new audience, he said. Few in Congress have the ability to reach millions of viewers with a budget hearing or by partnering with people like Letterman.

"Al Franken, as a former comedian and a very well-known comedian, has a level of interest in him and what he says and, of course, the way he says things, that is just not something Sheldon Whitehouse is going to match," Leiserowitz said.

Franken’s climate focus has already earned him plenty of accolades from left-leaning media outlets like ThinkProgress. He’s also been derided in conservative outlets for having lost his humor. But those interpreters lose their potency with someone like Franken, who can reach audiences across social platforms that, potentially, expose people to an issue that they otherwise wouldn’t pay attention to.

Last month, Franken homed in on climate change during a confirmation hearing for Bruce Walker, the assistant secretary of Energy for electricity delivery and energy reliability. Walker stuck with the line touted by other Trump administration nominees: The climate is always changing, and we can’t precisely measure how much humans are contributing to it. Franken punctuated the exchange with a question that made it seem as if Walker was intentionally misrepresenting scientific fact.

"You know that there is a consensus among climate scientists, though, you’re aware of that, right?" Franken asked.

When Franken teamed up with Letterman earlier this year to make "Boiling the Frog," a web series on climate change, he brought climate skepticism into the absurd. In a segment on Funny or Die, Franken equates doubters to a dying man who travels to dozens of doctors in a search for one who will tell him that eating excessively and smoking is healthy. The 33rd physician, who’s funded by the potato chip industry, tells the man that he’ll be fine.

In another segment, Franken introduces Whitehouse to Letterman to explain carbon pricing. "Sheldon is the expert on climate change; he is actually the greatest champion on this issue," Franken says. The video loses momentum as Whitehouse launches into a scholarly lesson on carbon tax. Franken infuses the series with enough humor to keep the audience.

Franken: "Anyone who is saying this ain’t real is talking through his butt."

Franken: "That in itself does cause some — "

Franken declined to comment for this story. That’s not unusual. He often tells reporters in the Capitol that he only speaks to journalists from Minnesota. Yesterday, after speaking at a rally protesting Republican lawmakers’ push to open the Arctic National Wildlife Refuge to drilling, he and his staff sprinted down a Capitol sidewalk to evade a reporter.

In his video with Letterman, he offers an explanation for why the climate issue is so important to him. He points to a picture of his grandson.

"I don’t want them in 50 years to say, ‘Grandpa, you knew about climate change. You were a United States senator. Why didn’t you do anything, and also, why are you still alive?’ because I would be 116," he told Letterman.

In general, Franken doesn’t lose his temper or express exasperation. Compare that with Sanders, who can berate his opponents, with a reddening face and wild white hair.

But Franken also doesn’t let climate skeptics stick to their talking points. He presses them firmly and repeatedly. When Interior Secretary Ryan Zinke claimed at a budget hearing in June that the glaciers in Glacier National Park have been melting since the end of the last ice age, Franken wondered if Zinke fully understood the magnitude of warming. He repeatedly cut off Zinke to ask the same question.

"I just want you to answer the question that I asked you," Franken said. "That’s all I want you to do."

He added, "Can you tell me how much warming government scientists … predict for the end of the century under a business-as-usual scenario?"

Zinke could only turn the questioning back on Franken.

"Can you tell me, sir, whether or not China increased its CO2 between now and 2030 under the [Paris] Agreement, and by what?" Zinke asked. "I will be glad to give you that answer."

A prominent climate scientist called Zinke’s response "stupid" after Franken set him up. It’s unclear if Franken’s technique will win any converts to the issue or if he’s just rallying the liberal base.

Changing people’s minds is extremely difficult, since most people have already made a decision on the issue, said Ed Maibach, director of George Mason University’s Center for Climate Change Communication. There is currently a "climate silence" in America because people stay away from talking about it to avoid provoking fights with those who disagree with them, he said. Viral videos and humor are unconfrontational, Maibach said, suggesting that they might bring new people into the debate.

"Most people don’t know how to talk about the issue in a way they feel comfortable or confident will lead to a good outcome," he said. "Any kind of role modeling that demonstrates how to have a civil and productive [conversation], that’s a really good thing."