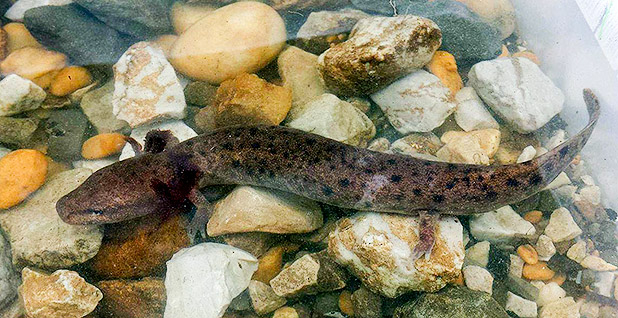 The Fish and Wildlife Service today granted long-awaited Endangered Species Act protections to a large Alabama salamander, warming up a year that could hatch big changes in the ESA.

In a move more than three decades in the making, the agency finalized the listing of the Black Warrior water dog as endangered and designated 420 miles of Alabama streams and rivers as critical habitat.

The decision relieves environmentalists, who saw the salamander identified as a candidate for federal protection in 1982 and who first petitioned for its ESA listing in 2004.

"The risk of extinction is high because the number of populations has decreased, and the remaining populations are small, isolated, and have limited potential for recolonization," the Fish and Wildlife Service stated.

"I am simply elated that the Black Warrior waterdog is receiving Endangered Species Act protection," Elise Bennett, an attorney with the Center for Biological Diversity, said in an email today. "Protecting this unique aquatic salamander will also protect water quality in hundreds of miles of rivers for the benefit of the species and Alabamans alike."

But the Black Warrior water dog’s new status, which caps a proposed listing published in December 2016 during the Obama administration, came together under ESA procedures now subject to revision during the Trump administration.

The Fish and Wildlife Service, for instance, had agreed to make a listing decision for the species under a timeline established in a comprehensive court settlement. Legislation currently awaiting House action would narrow future litigation opportunities and potentially shrink payments to groups, like the Center for Biological Diversity, that successfully bring ESA challenges (Greenwire, Oct. 4, 2017).

The decision to list the Black Warrior water dog was also made under current rules that exclude consideration of economic factors except during the selection of critical habitat. The salamander’s critical habitat spanning eight Alabama counties will impose only a small burden, the Fish and Wildlife Service estimates.

"The incremental administrative cost is not likely to exceed $150,000 annually," the agency concluded. "This designation of critical habitat is not likely to cause more requirements under state or local regulations, nor is it expected to have perceptional effects on the markets."

At the same time, the Fish and Wildlife Service acknowledged that "a federal agency was concerned that our economic analysis may have been an underestimation of the costs associated with consultations under the Act, as well as of the number of additional consultations."

A bill from Rep. Pete Olson (R-Texas), H.R. 717, would require review of the economic cost of adding a species as endangered or threatened, in addition to the critical habitat designation. Federal officials could decline to list species due to "the likelihood of significant, cumulative economic effects that would result from listing" under Olson’s bill.

More broadly, the Fish and Wildlife Service announced last month that it will "revise the regulations … for listing endangered and threatened species and for designation of critical habitat" as part of the administration’s overall regulatory agenda.

The department also says it will "clarify and improve" the so-called Section 7 consultations with other federal agencies when endangered species are involved (Greenwire, Dec. 18, 2017).

For the Black Warrior water dog, the Fish and Wildlife Service anticipates needing only a few Section 7 consultations annually, although they might range from issuance of permits by the Army Corps of Engineers and maintenance of pipeline and power line rights of way by the Federal Energy Regulatory Commission to projects funded through federal loan programs.

Depending on how fast Republican lawmakers and Trump administration officials move, revised procedures could affect the final outcome of a separate proposal made today, to list the Florida-based Panama City crayfish as threatened.