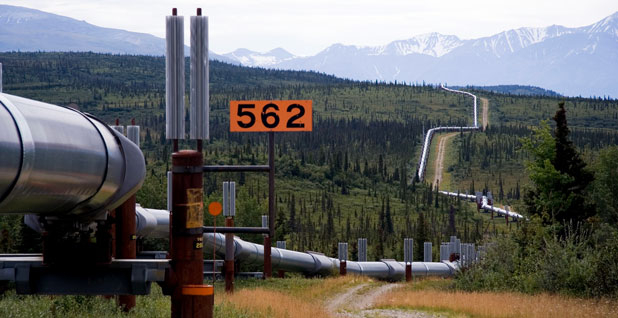 Alaska is submitting a permit application to FERC for a proposed $40 billion to $45 billion pipeline and LNG export project aimed at commercializing North Slope natural gas. Photo by Luca Galuzzi courtesy of www.galuzzi.it.

The state of Alaska plans to submit an application to the Federal Energy Regulatory Commission today for construction of a $40 billion to $45 billion pipeline and export project aimed at commercializing the state’s giant North Slope natural gas reserve.

The Alaska Gasline Development Corp. (AGDC), which is handling the project for the state, voted last week to send a 55,000-page application to FERC for construction of the massive three-phase venture.

Under that plan, the state would build a natural gas processing plant in Prudhoe Bay, home to the North Slope oil industry. The gas would be shipped via an 800-mile pipeline to an export terminal on the Kenai Peninsula in southern Alaska. Once converted into liquefied natural gas, the fuel would be loaded into tankers for delivery to Asian customers.

The Alaska LNG project was originally developed under a partnership between the state and Alaska’s major oil companies — Exxon Mobil Corp., BP Alaska and ConocoPhillips Co. But late last year, the companies decided not to move forward with the expensive venture due to low natural gas prices and an oversupply of LNG on the world market.

Now state officials are seeking to move the project forward on their own. They’re courting potential customers, investors and equity partners in a number of Asian countries that are expecting increased energy demand over the next seven years. AGDC is specifically targeting China, Japan, Singapore and South Korea.

Alaska Gov. Bill Walker (I) and his team recently discussed the Alaska LNG project with Chinese President Xi Jinping and his Chinese ministers when Xi made a stop in Anchorage. The governor also hopes to meet with top Japanese officials in an upcoming trip.

Meanwhile, Alaska officials are lobbying the White House for federal support for the Alaska LNG project. On Saturday, Walker met with Vice President Mike Pence when Pence’s plane made a refueling stop in Alaska. The governor used the opportunity to promote the Alaska LNG project, as well as the state’s strategic location for military operations in the Asia-Pacific region.

In March, Walker sent a letter asking President Trump to exempt the natural gas venture from two dozen environmental mandates. He’s also seeking $40 billion in federal loan guarantees for the plan, which would more than double a federal loan guarantee program for an Alaska project passed by Congress in 2004.

"They said it is the big, meaty kind of project that they like to see," Meyers said Friday at a state legislative hearing.

In submitting the Alaska LNG application to federal regulators, AGDC officials are asking FERC to complete work on a draft environmental impact statement in the second quarter of 2018, and to issue the final EIS by the end of 2018.

Under that schedule, the state hopes to make a final investment decision on the project in early 2019. But given the size and complexity of the ambitious project, energy experts suggest the state’s proposed timeline is unrealistic.

"This will be the largest and most complicated EIS that FERC has done," said Larry Persily, former head of the federal Office of the Federal Coordinator for Alaska Natural Gas Transportation Projects. "So common sense says it’s not going to go quicker than anyone expects. It probably will go slower."

The pace of the FERC environmental review could depend on the state’s ability to pay for the EIS studies. "FERC selects the contractor to work under its direction to prepare the EIS," explained Persily, now special assistant to the Kenai Peninsula Borough Mayor’s Office. "And the project applicant pays the bill."

The Alaska gas line corporation has a $100 million budget for 2017 and is under close scrutiny from the state Legislature, which is struggling to cut Alaska’s $3 billion budget deficit.

Before FERC will sign off on the project, AGDC must also settle a property ownership agreement with Exxon Mobil, BP and ConocoPhillips. The oil companies currently own or have an option to buy 650 acres of land in Nikiski, where the Alaska LNG gas liquefaction plant and marine export terminal are proposed to be built.

Under federal law, AGDC must control that site before regulators will grant a final permit.