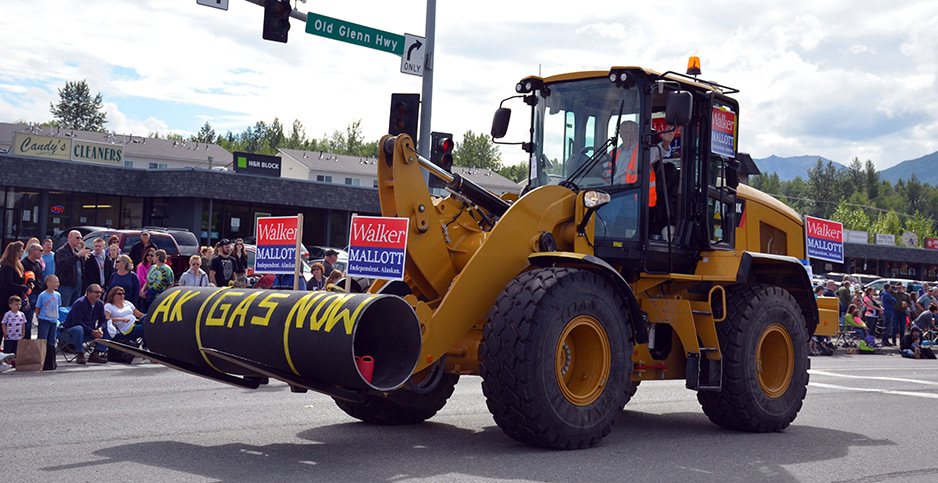 ANCHORAGE, Alaska — The blueprint to finance and build a $44 billion natural gas export project is coming under fire at a time when people here are gearing up for a governor’s race that could again throw the future of the Alaska liquefied natural gas project into question.

Alaska legislators last week raised concerns about funding options that the state Department of Revenue is considering to pay for the state’s portion of the massive natural gas commercialization project. Lawmakers were particularly opposed to the department’s proposal to invite the Alaska Permanent Fund Corp. and various state retirement funds to invest in the Alaska LNG project.

The Alaska Permanent Fund, cherished by state residents, is a $65 billion state-owned investment account created with state oil revenues. Part of the fund’s earnings are distributed to Alaskans each year in the form of dividends.

Some Alaska lawmakers are also worry that as the November gubernatorial election approaches, the Walker administration may be willing to sign generous contracts with the state’s potential Chinese partners and other investors in order to commit Alaska to building the LNG project.

State Sen. Cathy Giessel (R), chairwoman of the state Senate Natural Resources Committee, said that some of her colleagues are also uneasy about Alaska Gov. Bill Walker’s (I) plan to team up on the gas project with three of China’s government-owned companies. "There is a portion of us that has concerns about partnering with a communist country," she noted.

If Walker, who is running for re-election, is unseated in November, Giessel suggested the next governor might look to Alaska’s top oil producers, BP Alaska, ConocoPhillips Alaska Inc. and Exxon Mobil Corp., for guidance on the massive gas line venture.

The three companies had been partnering with the state on the Alaska LNG project until they bowed out in late 2016.

Former Alaska House Resources Committee Chairman Mike Hawker (R) said that under a new governor, the Legislature would have a chance to "rebuild our relationship with the gas producers as our business partners," rather than align with gas buyers such as the Chinese companies.

In an interview, Walker said that he could envision inviting BP, ConocoPhillips and Exxon Mobil to take a small role in the Alaska LNG project. "I would have no objection to them having a minority interest of some sort," he noted. "But what I won’t have is them in a position that they can control the timing of it.

"It’s critical to me that it’s done on Alaska’s timing, [and] not being fit into somebody else’s portfolio."

He predicted that if the oil companies took control of the Alaska LNG project, it would face a new round of delays and expenses that could further postpone the venture. "I think at that point, it would never happen," he said.

Alaskans have been waiting for access to cheap North Slope natural gas for decades. Nearly every Alaska governor has worked with state oil companies on ventures to commercialize those gas reserves. Each time, however, the plans fell apart and the producers continued to reinject the gas into their wells to boost crude production.

Walker, the state’s biggest champion of the gas project, said he doesn’t support the state Department of Revenue’s proposals to have the Alaska Permanent Fund invest in the gas line project. "I think it would make Alaskans nervous to invest in it, so I’m not in favor of that," he said.

At a joint hearing last week of the Alaska House and Senate Natural Resources committees, Deputy Commissioner of Revenue Mike Barnhill said those funding options are among several being studied as the state considers how to pay for its portion of the massive natural gas commercialization project.

State Sen. Bert Stedman (R) warned that the Permanent Fund and other state accounts could take substantial financial hits if the Alaska gasline project goes over budget. "When you have cost overruns of $10 [billion], $20 [billion], $30 billion possibly, which is not out of the realm of possibilities, how are you going to factor in the state’s exposure to capital calls?" Stedman asked at the hearing.

The legislators also quizzed state officials about how Alaska would receive royalties for the North Slope gas and how payment in lieu of taxes would be distributed to local communities along the pipeline route.

Giessel explained that the Alaska Legislature is eager to commercialize the 35 trillion cubic feet of natural gas that’s now stranded at the North Slope oil fields.

"Most of the committee members here, from both the House and Senate, voted for this project," Giessel said. "But not at any cost. We want to see it built with benefits to the state, not just in jobs. Jobs are critical. But even beyond that — in revenue and royalty for the state."

The Alaska LNG project is being developed by the Alaska Gasline Development Corp., a quasi-independent state-owned company. AGDC is counting on a team of Chinese companies to help finance and build the Alaska LNG venture.

Under a nonbinding joint development agreement reached last year by AGDC and the Chinese firms, the Bank of China Ltd. and CIC Capital Ltd. would provide 75 percent of the funding — roughly $32 billion — to build the Alaska LNG project.

The state would repay that loan by providing China Petrochemical and Chemical Corp., known as Sinopec, with access to 75 percent of the LNG that would flow through the Alaska pipeline for the length of the loan, which is up to 30 years.

The agreement gives Alaska and the Chinese companies until the end of this year to reach a final pact on the project. But Alaska officials say the Chinese firms are pushing to spell out the terms of the LNG sales before that deadline.

The negotiations are going on at a time when Alaska’s political season is heating up. Two Republicans — former state Sen. Mike Dunleavy and former state Lt. Gov. Mead Treadwell — will face off in an Aug. 21 primary. Former Alaska U.S. Sen. Mark Begich is the only candidate in the state’s Democratic primary. Walker, who is running as an independent, is not involved in a primary.

Polls show that Dunleavy is likely to beat Treadwell in the Republican primary. Dunleavy is also ahead in the polling in a three-way race with Walker and Begich.

Neither Dunleavy nor Begich has made it clear how he would handle the Alaska LNG project.

During the 2014 race for governor, Walker advocated that the state take control of the gas pipeline project. However, once elected governor, Walker agreed to move forward with the public-private partnership that Parnell had negotiated with BP Alaska, ConocoPhillips Alaska and Exxon Mobil.

Then, in late 2016, the oil producers sought to slow down work on the venture due to low gas prices and increased competition on the world market. Walker immediately grabbed the opportunity to put AGDC in charge of the project.

AGDC has continued to advance the outlines of the project originally developed by the Alaska oil producers. That plan includes construction of a North Slope gas treatment plant, a feeder pipeline from natural gas fields at Point Thomson and an 800-mile pipeline to carry gas from Prudhoe Bay to the Cook Inlet. There, the gas would be converted to LNG and exported to Asia.

State officials say AGDC is making significant progress on the megaproject, which would be one of the biggest energy projects in the world.

The Federal Energy Regulatory Commission is crafting its environmental impact statement for the project. FERC plans to issue a proposed EIS in March 2019 and a final report by December 2019, with the federal authorization decision expected in March 2020.

AGDC is planning to begin construction on the megaproject in 2019 and to start shipping gas through the completed pipeline by 2024-25.

The state agency is also working with the Bank of China Ltd. and Goldman Sachs & Co. LLC to solicit equity investors in the project beginning in early 2019.