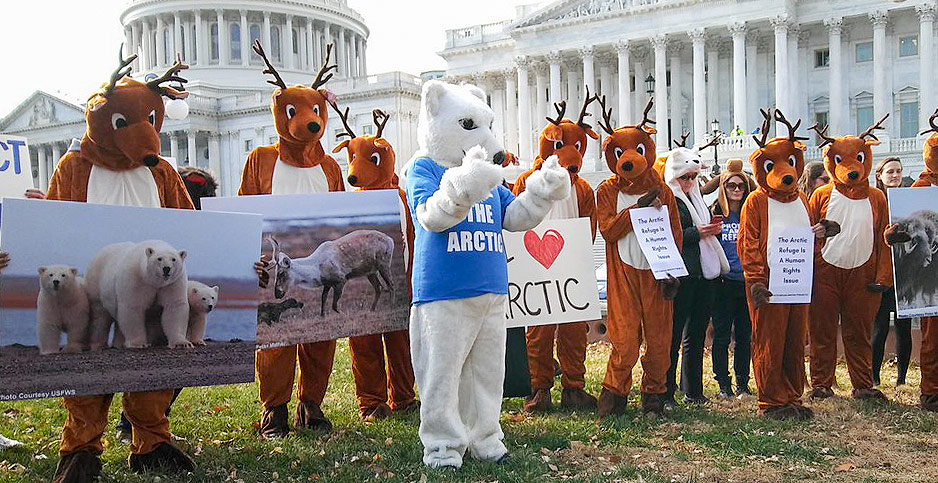 Environmentalists and members of the Gwich'in First Nations protested in front of the Capitol on Thursday. @AlaskaWild/Twitter

A decadeslong clash of cultures among Alaska’s Native communities is coming to a head this week as Congress takes final steps to allow oil and gas development in part of the Arctic National Wildlife Refuge.

For years, the Gwich’in Steering Committee and the Arctic Slope Regional Corp. have locked horns over the fate of an isolated, expansive, flat stretch of tundra along the Arctic Ocean in northeastern Alaska known as the coastal plain.

The Gwich’in people refer to that 1.5-million-acre region as "the place where life begins" and introduce themselves as the "caribou people." They honor the coastal plain as a sacred calving area for the Porcupine caribou herd, which they rely on for 80 percent of their diet.

"We must protect the calving grounds," explained Bernadette Demientieff, executive director of the Gwich’in Steering Committee. "That place is untouched, unspoiled. These lands, these animals — this is a gift from the Creator. And anybody who thinks that oil or money is more important, I don’t understand."

The Porcupine caribou herd, which the Fish and Wildlife Service estimates at 197,000 animals, migrates 700 miles each year from ANWR’s coastal plain, through much of the wildlife refuge and into Canada.

Over the centuries, the Gwich’in set up their villages along the migratory route. Today the Gwich’in Steering Committee represents about 9,000 people and 15 small villages scattered across northeastern Alaska and western Canada.

Since the 1980s, the steering committee has worked closely with powerful, well-funded national environmental groups to rally public opposition to oil drilling on those lands. That alliance has blocked repeated attempts to permit oil rigs on the coastal plain.

But this year, the political stars aligned for the Arctic Slope Regional Corp., which has been lobbying shoulder to shoulder with state and oil industry leaders to allow drilling in ANWR’s coastal plain.

The pro-oil forces are focused on the whopping 5.7 billion to 16 billion barrels of recoverable oil that the U.S. Geological Survey estimates could be located in the region.

ASRC is one of 12 regional corporations that Congress created in 1971 to resolve conflicting land claims between the state of Alaska and its indigenous residents. In passing the Alaska Native Claims Settlement Act, lawmakers granted ASRC nearly 5 million acres of land that covers a broad region stretching from the Chukchi Sea to the Canadian border.

The Native corporation’s territory engulfs most of the Arctic refuge, including the much-disputed coastal plain.

ASRC is a private, for-profit regional corporation that represents the business interests of its 13,000 Iñupiat shareholders and eight northern Alaska Native villages. Last year, the corporation earned $2.4 billion through six lines of business, including a variety of petroleum services.

In the hours before the Senate voted to allow leasing in part of the Arctic refuge, ASRC Executive Vice President Richard Glenn explained that oil development on the Alaska coastal plain is essential to maintaining the quality of life for the North Slope villages.

"The only way to create huge quality-of-life improvements is by the presence of the oil and gas industry in our region," Glenn said. "The industry provides a tax base. The tax base provides opportunities for community development. I’m talking about schools and fire engines and snow removal and water, sewer and reliable power."

He took issue with the Gwich’in’s claims that oil drilling would devastate the Porcupine caribou herd. "At some point, there may be development," noted Glenn, who heads the lands and natural resource division at ASRC. "And development is going to have a footprint. And the footprint of development will be such a small fraction of the overall proportion of the coastal plain that it’s negligible."

Arguing that extensive oil and gas development in the Prudhoe Bay region has not affected Alaska’s central caribou herd, he said, "The looming disaster for the caribou herd and its calving areas is not accurate."

At the heart of today’s battle over oil drilling in ANWR is a shrewd land swap deal that the Native corporation negotiated with the Interior Department 30 years ago.

The land exchange gave ASRC the subsurface mineral rights to 92,000 acres of the Alaska refuge’s coastal plain land. The Kaktovik Iñupiat Corp. (KIC) owns the surface rights to those lands. KIC, which works closely with ASRC, is a for-profit corporation that handles land development issues for the residents of Kaktovik.

That community, located on the Beaufort Sea coast, is the only city located in ANWR’s coastal plain.

By law, the ASRC-Interior land swap properties couldn’t be drilled without congressional approval. But all that would change as a result of the $1.5 trillion tax legislation approved early Saturday morning by the Senate. House lawmakers and President Trump are also expected to sign off on the ANWR language in the tax bill.

The massive tax package includes language opening the door to hydrocarbon development in ANWR’s coastal plain, with the promise that oil and gas leasing will raise nearly $1.1 billion for the federal Treasury over the next 10 years.

Once the tax bill becomes law, ASRC can immediately sell leases to its coastal plain lands or begin its own exploration and development projects, subject to state and federal technical and environmental mandates.

The Interior Department will be following a far longer timeline. Regulators won’t be able to auction off leases on the federally owned coastal plain lands until they assess the environmental impacts of drilling and begin the long process of managing the area for energy development.

Meanwhile, there’s some evidence that ASRC may have already sold leases on its Arctic refuge lands to oil interests.

In 1986, ASRC joined forces with KIC, Chevron Corp. and several other oil companies to drill an exploration well on the coastal plain. The well, located 15 miles southeast of the city of Kaktovik, is the only hole ever drilled in ANWR.

Ever since then, the results of that drilling operation — known as the KIC-1 well — have remained one of Alaska’s most closely held secrets. Only a handful of executives at BP PLC, Chevron and the Native corporations are privy to that information, along with a select few state officials.

The details of the ASRC-Interior land swap were laid out in a 1989 report from the Government Accountability Office. That study reported that ASRC had "received $30 million from its oil company partners for the exclusive right to conduct exploratory activities and to acquire oil and gas leases" on the Native corporation’s refuge lands.

Glenn declined to comment about ASRC’s private agreements with industry.

The ASRC-Interior Department land deal, known as the Chandler Lake land exchange, also gives the Native corporation exclusive rights to all revenues from development of its 92,000 acres of Arctic refuge lands.

That’s a stark departure from terms of the 1971 Alaska Native Claims Settlement Act, which requires Alaska’s 12 Native corporations to share 70 percent of the revenues that each individual corporation derives from any subsurface estate.

However, the exchange was specifically structured to absolve ASRC from having to share the money it receives from its ANWR lands with the other regional corporations.

In retrospect, the GAO report observed that the land swap "was not in the government’s best interest" in part because it allows ASRC to retain the exclusive rights to the KIC-1 test well data.

"As a result, [ASRC] and its oil company partners are now in a superior position to all other potentially interested parties, including the federal government, in assessing the oil and gas potential of ANWR," the report said.

Late last week, the Gwich’in Steering Committee and other Alaska opponents of oil development in the Arctic refuge held a prayer service and a candlelight vigil in downtown Fairbanks to protest the ANWR provisions in the Senate tax bill.

Now, as the future of the wildlife refuge takes a dramatic turn toward oil development, Demientieff and a small group of Gwich’in and Iñupiat activists are flying to Washington for Wednesday’s 57th anniversary of the Arctic refuge.

"We will continue to defend our homelands," Demientieff said in an email after the Senate vote.

The wildlife refuge, originally established by President Eisenhower as the Arctic National Wildlife Range, has always been the subject of a tug of war between oil interests and those who want to preserve the land.

In 1980, Congress passed the Alaska National Interest Lands Conservation Act, which vastly expanded the Arctic wildlife range and gave the region its current name. Today, ANWR covers roughly 19.6 million acres of land and water in northeastern Alaska — an area about the size of South Carolina.

But at the time, Congress left open the fate of the much-disputed coastal plain. One part of that law — Section 1002 — specifically set aside the 1.5-million-acre northern lands and directed the Interior Department to analyze the region’s oil and gas potential and wildlife resources.

Under that provision, only Congress can authorize oil drilling on the coastal plain, which is often referred to as the 1002 area. Over the years, the Alaska congressional delegation has repeatedly advanced legislation to sanction oil and gas development. But each time, pro-oil forces hit a brick wall.

This year, the Alaska delegation has had its best shot in decades to begin energy development in the refuge’s coastal plain.

Senate Energy and Natural Resources Chairwoman Lisa Murkowski (R-Alaska) managed to use the budget reconciliation process to attach ANWR language to a massive tax package. As a result, the provision moved through the Senate by a simple majority vote without the threat of a Democratic filibuster.

Murkowski’s ANWR title directs the Interior Department to hold two oil and gas lease sales in the 1002 area over the next 10 years. Each sale must offer at least 400,000 acres of coastal plain lands for development.

Under Murkowski’s provisions, oil production facilities in the region would be limited to a total footprint of just 2,000 acres including the airstrips, gravel berms and pieces used to support pipelines. At a congressional hearing last month, Murkowski argued that thanks to advanced oil development technologies, the oil developers need far less land than they have in the past.

The Senate bill would give management of the coastal plain to the Bureau of Land Management, which is already handling oil and gas leasing in the National Petroleum Reserve-Alaska. ANWR is administered by the Fish and Wildlife Service.

Former USGS Director Mark Myers observed that the oil companies will need to work cooperatively to keep their operational footprint to 2,000 acres. "It would be logical for the government to require a lot of technical cooperation between various parties that would have the leases," he said.

Myers, who also served as Alaska’s natural resources commissioner, predicted that prospective industry developers will have to find large reservoirs of oil before they would be willing to invest in the ANWR lands.

"You need a substantial size accumulation for anchor production, just because you will have to build a significant amount of infrastructure over there," he said. "But once you build that infrastructure, you can see where the satellite fields are and you could expect further development within the environmental constraints that are put on development."

But he added: "It’s typical [to have] active exploration and development … if it becomes available for leasing, depending on the interest of industry. That’s what happens all over America."

While the Gwich’in people and environmental activists debate the next step in their battle to stop resource development in the Arctic coastal plain, oil industry advocates are awaiting the results of future seismic studies to explain, at long last, how much oil is in the 1002 area.

Glenn noted, "If we remove the provisions that lock up the coastal plain right now, we’ll be able to finally assess the value of the subsurface using modern tools. Until that point comes, it’s like people arguing about the belongings inside of a closet when they don’t even want to open the door."